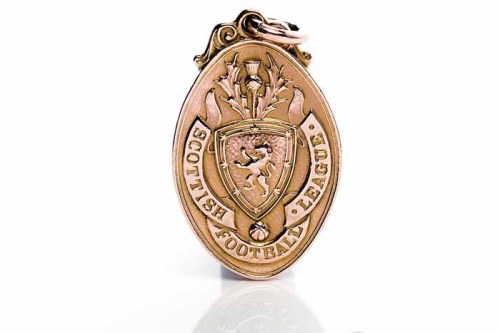 Share this
NINE CARAT GOLD SCOTTISH FOOTBALL LEAGUE CHAMPIONSHIP 1931-32 MEDAL the reverse inscribed 'Won by Motherwell FC, J. McMenemy 1931-32', maker J McMenamin Ltd, Birmingham 1931, medal 4cm long Note: John McMenemy was the son of the all-time Celtic great Jimmy McMenemy. John made his Celtic debut in December 1925 from St Roch's making a total of sixteen league & Scottish Cup appearances for Celtic, scoring two goals. He was to join Motherwell in 1928 where he would become a regular fixture, gaining a Scotland International Cap in 1933. It was a truly remarkable season that ended with Motherwell five points ahead of Rangers as their League win was the first outside the Old Firm since Third Lanark had won the title back in 1904. It was to be the only time that the League title was to be wrested from Celtic and Rangers in the years between the wars.