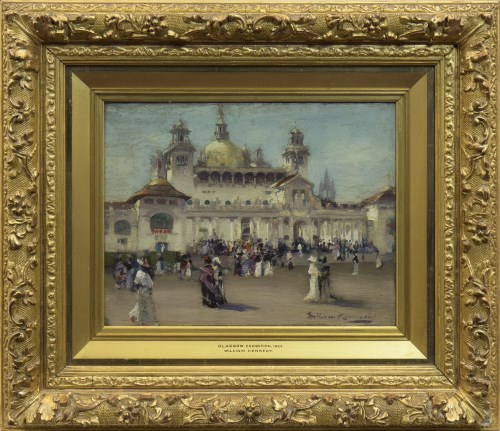 WILLIAM KENNEDY (SCOTTISH 1859 - 1918), GLASGOW INTERNATIONAL EXHIBITION, 1901 oil on panel, signed 27.5cm x 36cm Framed and under glass. Note: William Kennedy was born in Paisley, where he attended the Paisley School of Art. In the early 1880s he moved to Paris, where he attended the Académie Julian and studied with artists such as Jules Bastien-Lepage, William-Adolphe Bouguereau, Raphaël Collin, Gustave-Claude-Etienne Courtois, and Tony Robert-Fleury. Among the Glasgow Boys studying in Paris in the early 1880s, Kennedy's style was a synthesis of Whistler's and French and Scottish painting. In this oil, his choice of subject matter followed the example of Lavery, who had painted a number of highly successful views of the 1888 Glasgow International Exhibition. Like Lavery, Kennedy was aware of Whistler's city views, such as his Cremone Gardens Nocturnes, with their carefully and elegantly placed figures set in an empty foreground. Kennedy became a prominent member of the Glasgow Boys and in 1887 he was elected President of a society formed by the group's members.