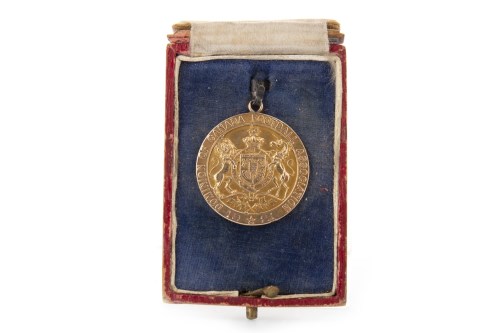 MOTHERWELL FOOTBALL CLUB INTEREST an early 20th century gold medal awarded to Willie Rankin, an 'inside right' who played for Motherwell FC from 1917- 1924. This medal was awarded to the player during a tour of Canada in 1921. Inscribed in relief 'Dominion of Canada Football Association', engraved '1921', verso further engraved 'Scots Canadian Football Tour, Presented to W Rankin by D MacNeil for 1st goal scored in Canada (1921)', stamped 10k, 12.13g, with original box Noted on the Motherwell FC website: ''Signed from Parkhead Juniors, in the 1920s this Inside Right was a modest goal scorer. Largely acting as provider for Hughie Ferguson. His cultured style however, was nurtured by manager John 'Sailor' Hunter and when he left the club some thought he was the best player they had ever seen at Fir Park. Willie Rankin gained several league caps but never a full international for Scotland.''