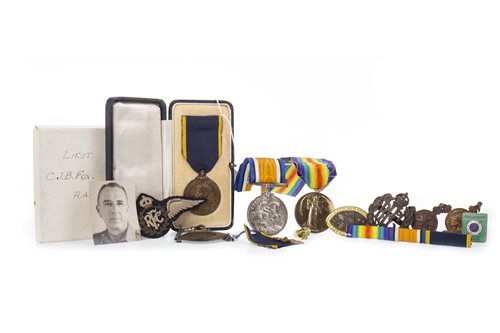 MEDAL GROUP AWARDED TO CHARLES J. BROOKFIELD FOX,
comprising the Great War for Civilisation and British War Medals, both for 'Lieut. C.J.B. Fox R.A.F.', with WWI embroidered pilot's wings and badge, a silver name bracelet for '2nd Lieut C.J. Fox R.F.C. - Craghead Co. Durham' and later photograph of him in (possible WWII Home Guard?) uniform, as well as an Edward Medal (mines) 2nd Class, 1930, for a pit disaster in West Stanley, with accompanying newspaper clippings, 'Dr. C.J.B. Fox was the colliery doctor, who was one of the first on the scene'; along with a photograph of him as a young boy on a bearskin rug; and a two St. John's Ambulance medals, for John Henry Mansfield and Catherine Fox, and Chartered Society of Physiotherapy and Royal Life Saving Society badge