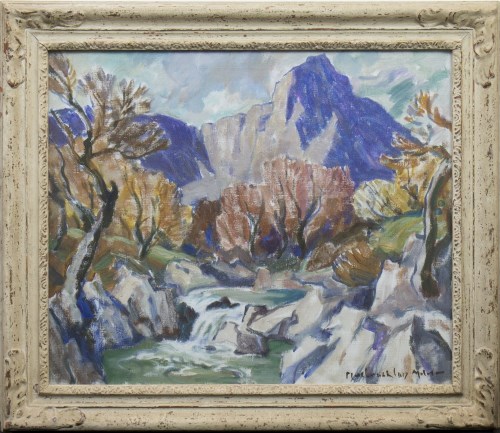 * JOHN MACLAUCHLAN MILNE RSA (SCOTTISH 1885 - 1957), IN GLEN ROSA, ISLE OF ARRAN oil on canvas, signed 50cm x 60cm Framed and under glass. Label verso: Fraser & Son, Fine Art Dealers, 38 Commercial Street, Dundee. Provenance: Dr Malcolm Chalmers, Broughty Ferry, Dundee and by descent. Note: Maclauchlan Milne returned from France and set up home at High Corrie, Arran just before the outbreak of the Second World War. It was to be his home until his death in 1957. Milne is often referred to as ''the fifth Scottish Colourist'' and yet his quality is at least the equal of much of the output of the other four. Even though Milne's paintings were widely exhibited in his lifetime at the very best venues to great success, it's probably because he never established a long term relationship with any one gallery or dealer that his paintings have been undervalued for many years. The current auction record for a Maclauchlan Milne Arran scene stands at £67,250 (premium) at Sotheby's The Scottish Sale (Sale L09815) 30th September 2009 for lot 66, ''Corrie Harbour, Arran'' a 48cm x 58.5cm oil on panel. The John Maclauchlan Milne Estate is now represented by Tom Hewlett's Portland Gallery (London) and unsurprisingly, his profile and values have been growing. A major exhibition ''Milne And The Colourist Connection'' will be staged at Portland Gallery (London) 21st September -13th October 2017.