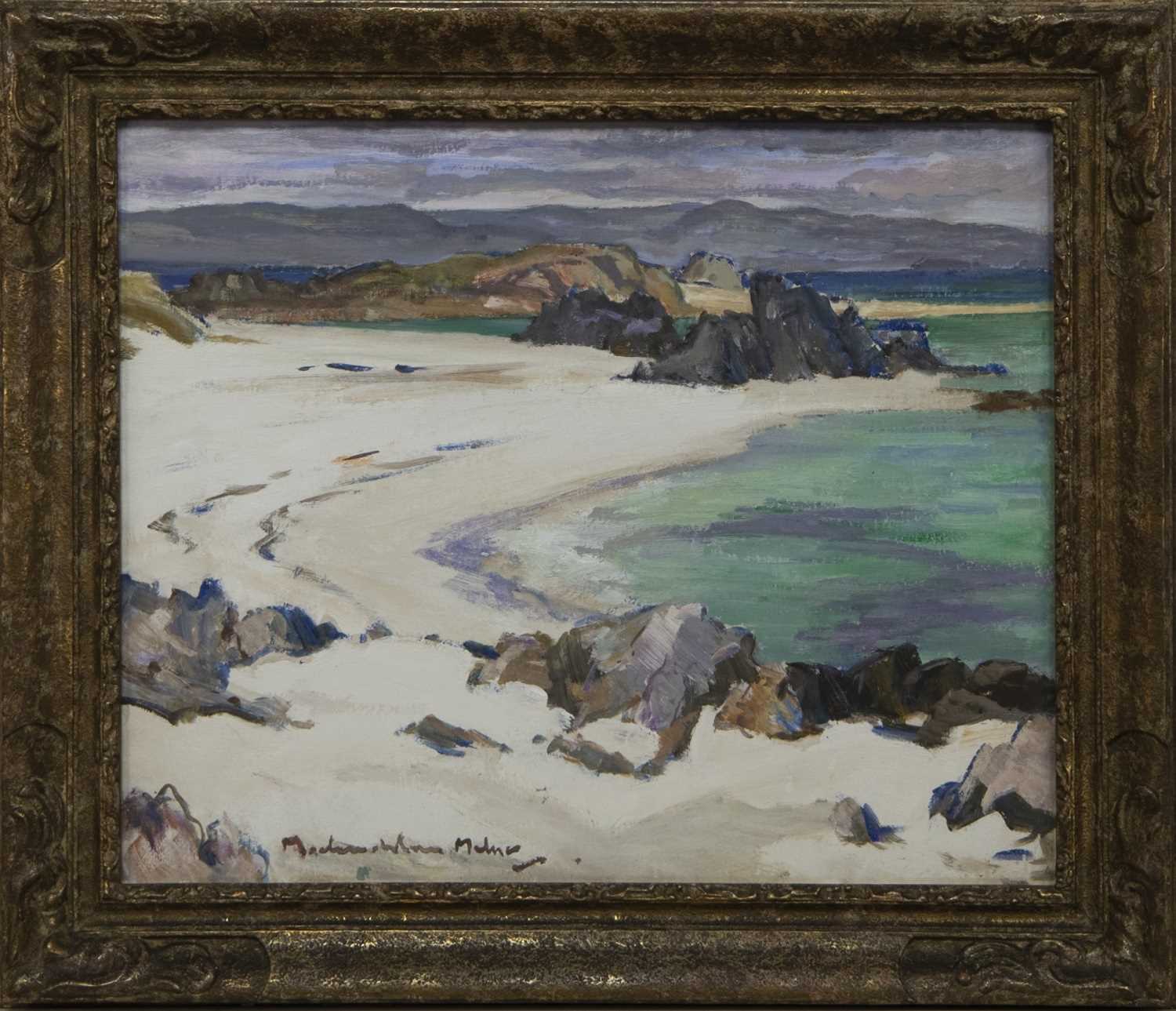 * JOHN MACLAUCHLAN MILNE RSA (SCOTTISH 1885 - 1957),
THE GREEN POOL, IONA
oil on board, signed
image size 43cm x 53cm, overall size 56cm x 66cm
Framed and under glass.
Provenance: In the late 1930's a father took his daughter to Iona shortly after the premature passing of her mother. The daughter was soon to be married and those few days together on Iona were precious. They stayed at the tiny St Columba Hotel at the same time as John Maclauchlan Milne and one evening the artist, with the consent of the proprietor, positioned several paintings on the floor leaning against the wall in the dining-room. The father bought his daughter two paintings as a wedding gift, one of those being "The Green Pool, Iona". Some 50 years later, the daughter "downsized" after moving from her home in Glasgow and gifted the painting to her long time close friend who had always admired it. The recipient of this beautiful gift has treasured the painting for some thirty years but after having recently downsized herself, she no longer has a suitable place to hang it. The only time "The Green Pool, Iona" has been publicly exhibited was in the dining-room of The St Columba Hotel on Iona in the late thirties, probably still slightly wet and only a few days after it was completed. It is housed in the original frame and is behind glass, as it always has been. The condition is excellent and it has never been cleaned or restored in any way.
Note: John Maclauchlan Milne was encouraged by his father – the Scottish landscape painter Joseph Milne. His father’s influence is apparent in his early work, before his style was transformed by the Scottish Colourists and modern French painters, particularly Cézanne. During the First World War Maclauchlan Milne left his home in Dundee to fight in France on the Western Front. France had a strong impression on the young artist. From 1919 -1932 he spent long periods in France. Initially he stayed at rue des Quatre-Vents in Paris but by 1924 Milne was in Cassis with Peploe, Cadell and Duncan Grant. They also spent considerable time in San Tropez. Almost all his exhibits in the 1920’ s were of Mediterranean subjects. His obituarist wrote ‘ like Peploe, he saw Cézanne and was immediately conquered… Here in the Midi, Milne found himself and the impact of this new experience stamped all his subsequent work'. At the outbreak of the Second World War, Maclauchlan Milne returned to Scotland and settled at High Corrie on the Isle of Arran. Here he painted the whitewashed cottages, the little jetty below the village and Goat Fell, the highest peak on the island. He died in Arran in 1957. Maclauchlan Milne exhibited at the Royal Scottish Academy, at the Glasgow Institute and showed works in London and New York. A Centenary exhibition of his work was held at Dundee Art Gallery and Museum in 1985 and a major Retrospective Exhibition was held at Portland Gallery (London) in 2010. As well as enjoying the company of the Scottish Colourists and exhibiting alongside them, Milne shared many of their patrons. William Boyd, the Managing Director of Keiller’s marmalade firm, became one of his most important patrons. In Boyd’s home at Claremont several works by William McTaggart, Peploe, Hunter and Milne were displayed. His collection of French paintings included Monet, Sisley, Van Gogh, Matisse, Bonnard, Vuillard and de Segonzac. Alexander Keiller, head of the marmalade firm, was another important patron. He paid Milne a stipend – so that he could spend the summers in France – in return for paintings. The collector, Matthew Justice, was a close friend of George Leslie Hunter as well as his agent during the 1920s. Justice owned around a dozen of Milne’s paintings; his sitting-room was hung exclusively with works by Peploe and Milne and his drawing room contained eleven Peploes, three Marchands, one Hunter and five Milne’s. The Justice collection also included works by Vuillard, Segonzac, Moreau and Matisse. Justice was friends with William Boyd and James Tattersall, another important patron of Milne. Maclauchlan Milne may only have visited Iona on three occasions in 1937, 1938 & 1939. On each visit, he stayed at the St Columba Hotel. These are his only documented visits, but there might have been more. The majority of his Iona paintings are of, or from, the north end of the island and the view to the north of the Treshnish Isles was one he was known to have repeated with variations of the viewpoint and the angle. Iona has long been the subject of prayer, prose and poetry. This historic and sacred island has also been the focus of a multitude of artists for more than two centuries. In the early to mid-twentieth century it was visited in the summers by many of Scotland's most renowned painters including the Scottish Colourists Cadell and Peploe. It was generally the case that when times were tough for artists, collectors would more readily invest in an Iona painting than any other subject.