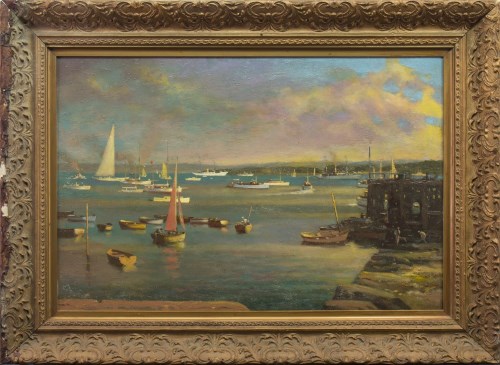 * ROBERT CRAIG WALLACE (SCOTTISH 1886 - 1969), NAHLIN AT RHU, GARELOCH oil on canvas, signed 51cm x 76cm Framed. Note: Nahlin is a luxury yacht and one of the last of three large steam yachts constructed in the UK. She was built by John Brown & Company, Clydebank, for Lady Annie Henrietta Yule, heiress of Sir David Yule, and was launched in 1930. She is currently owned by British industrial entrepreneur Sir James Dyson, who purchased her from Sir Anthony Bamford, Chairman of JCB. In 1936 Nahlin was chartered by King Edward VIII - rather than using the Royal yacht Victoria and Albert III, to ''enable the avoidance of formality accorded to Royalty'' - and used by him and Mrs. Wallis Simpson during a cruise in the Adriatic Sea. As Lady Yule was a strict teatotaler, the King took over the library on the shade deck where he replaced the books with bottles. The presence of Simpson on board the yacht first ''alerted the world's media to the impending abdication crisis. Informal photographs of Edward and Simpson on board together during the cruise were not published in Britain but became front-page news in the United States. Provenance: Private Glasgow collection.