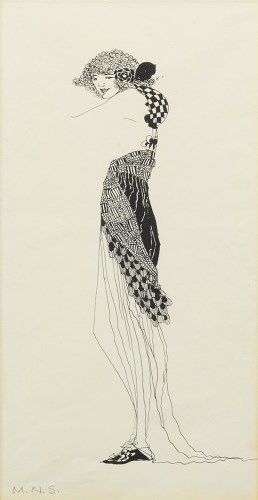 * MARY NEWBERY STURROCK (SCOTTISH 1890-1985), AN EXOTIC WOMAN pen and ink on paper, signed with initials 25.5cm x 13cm Mounted, framed and under glass Exhibited: Edinburgh, Bourne Fine Art, 'British Paintings'. October - November, 1982; and Edinburgh, Bourne Fine Art, 'Edinburgh Group 1988'. Cat no. 8. Labels verso: Bourne Fine Art, 4 Dundas Street, Edinburgh (Now The Fine Art Society). Note: Mary's parents were Francis Newbery (Director of Glasgow School of Art from 1885 - 1917) and Jessie Newbery (prominent ''Glasgow Girl''), so it was no surprise that she would become a gifted artist. On 20th December 1899, the young Mary presented the key to the ''new'' Mackintosh designed Glasgow School of Art to Sir James King, Lord Provost of Glasgow at the official public opening ceremony. She went on study at the Glasgow School of Art and Cecile Walton became her closest friend. Both family's rented holiday homes at Walberswick, Suffolk which became a regular base for many of the Glasgow artists. In 1918 Mary married the artist Alick Riddell Sturrock RSA (1885 - 1953). Charles Rennie Makintosh was a close friend and they often painted the same flowers: Mary telling him the Latin names so that he could inscribe them correctly. Mary was known for her exquisite pen and ink and pencil drawing skills, often with botanical subject matter. Her output was relatively small but in her own right, she was an important and influencial artist. Additional note: The ceremonial key Mary presented to Sir James King in 1899 was offered at auction in Edinburgh in April 2018 and sold for £40,000 (premium) which almost certainly makes it the most valuable key ever sold at auction in Scotland.