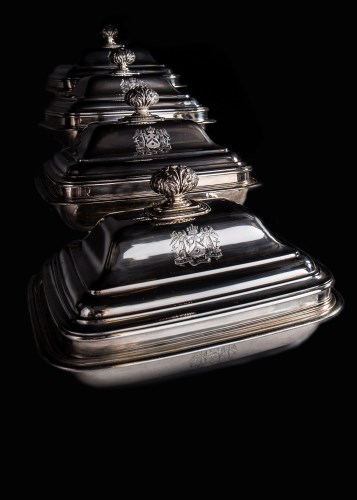 RARE SET OF FOUR SCOTTISH GEORGE IV SILVER ENTREÉ DISHES AND COVERS maker J W Howden & Co, Edinburgh 1820, of rectangular form, double domed lids with cabbage finials, both dishes and covers engraved with coat of arms and motto 'At spes non fracta (But hope is not broken)', each pair of dishes and covers numbered '1-4', approximately 8764g gross, each dish 30cm long Note: McTear's are grateful to the The Royal College of Arms for informing us that these are The Coat of Arms, coronets and supporters of one of the Earls of Hopetoun. These pieces were probably comissioned by General John Hope, 4th Earl of Hopetoun PC KB (17 August 1765 - 27 August 1823), possibly to celebrate his succession in the Earldom in 1816. The fourth Earl died shortly after inheriting the title and was in turn succedded or by his eldest son from his second marriage, John. In 1822 George IV visited Hopetoun House, the seat of the Earls of Hopetoun just outside Edinburgh, at the end of his historic state visit to Scotland and was received by the 4th Earl. The state visit was the first time a reigning British sovereign had visited Scotland for 170 years and it was stage-managed by Sir Walter Scott as an important part of his Romantic Movement in Scotland. Records show that the King arrived at Hopetoun at 1.15pm and after being received by the Earl and Countess he lunched sparingly on turtle soup and three glasses of wine. He then knighted Sir Henry Raeburn, the Scottish portraitist, and Captain Adam Ferguson, Keeper of the Regalia in Scotland, in the Yellow Drawing Room using Lord Hopetoun's sword. At 3pm he made his farewells and made his way by carriage to Port Edgar, just outside South Queensferry, where the Royal Yacht waited to return him to England. It is entirely possible that these impressive dishes were present on the table during the George IV lunch reception in Hopetoun House.