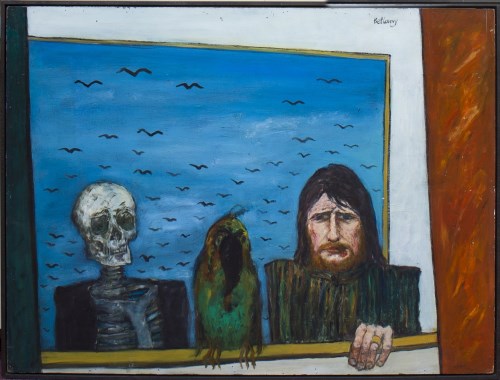 * JOHN BELLANY CBE RA HRSA (SCOTTISH 1942 - 2013), SELF PORTRAIT, HOGMANAY, 1968 oil on board, signed, further signed, titled and dated 1968 verso 92cm x 122cm (approx 36 x 48 inches) Framed Provenance: Exhibited Germany, Kunsthalle Jesuitenkirche, Aschaffenburg, John Bellany - a Scottish Odyssey, Sept. 2006. Previously offered by Bonhams (Edinburgh) 19th April 2012, lot 121 with estimate of £50,000 - 70,000. (http://www.bonhams.com/auctions/19863/lot/121/) Note: ''Self Portrait, Hogmany, 1968'' was painted shortly after Bellany's traumatic but inspirational visit to Buchenwald. Note: It is well documented that Bellany used hardboard until 1969. ''In 1969 Bellany painted his second triptych Homage to John Knox. It brought together the principal themes in his work at the time and was heavily influenced by Max Beckmann's painting Departure. This was the last time Bellany painted on hardboard. He now began painting on canvas, which he found frustrating for the first six months until he got used to the 'tooth' of the surface. The change altered his technique. His use of glazes and meticulous handling were replaced by a more modern and overtly expressionist style'', These early Bellany oil on boards are relatively rare and invarably command a premium at auction. ''Self portrait - Hogmanay was painted towards the end of Bellany's time at the Royal College of Art. Several new and important motifs can be seen in the painting, the parrot, the skeleton and the element of self portraiture. Bellany always had plastic parrots dotted around his studio. The exaggerated beak is a theme repeated by Bellany with seagulls and puffins in later works. Around the time of the painting Bellany went to Germany with friends, the artist Alexander Moffat and poet Alan Bold, where they visited artists on the east side of the Berlin Wall, an experience that was to prove a useful lesson in social realism for all three. While they were there they went on a tour of Buchenwald concentration camp. John Bellany's work is included in many of the world's great collections including the Museum of Modern Art, New York, and Tate Britain, London.