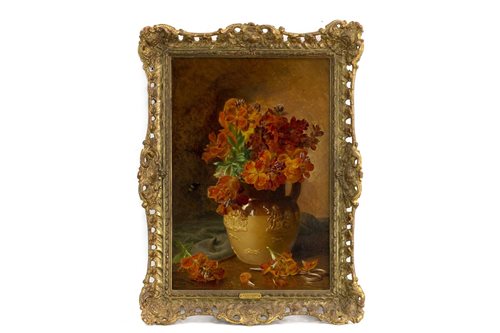 STILL LIFE WITH WALLFOWERS IN A STONEWARE JUG, BY ELOISE HARRIET STANNARD

Note: Eloise Harriet Stannard was born in 1829 in Norwich, England where she lived her entire life. She was one of 14 children of landscape painter and drawing teacher Alfred Coppin and Martha (Sparks) Coppin. Her uncle was the painter Joseph Stannard; both her father and her uncle were members of the Norwich School of painters, Britain's first provincial art movement. Eloise and her aunt Emily Coppin Stannard (Joseph's wife) would become the only two notable women artists associated with the Norwich School. Stannard was probably trained as an artist by her father, and her style was influenced by traditional Dutch still life painting, especially the artist Jan van Huysum. Her subjects were mainly fruits—particularly fruits not grown in England—piled in baskets and bowls, set against a monochrome background in natural light and sometimes accented with small insects. Her fine brushwork and multiple paint layers produced a characteristically luminous surface. Stannard is today considered one of Britain's most gifted still life painters.Stannard suffered from poor health but still maintained an active career as a painter, exhibiting regularly and becoming so successful that she never needed to take in pupils, as was often the case for women artists in the 19th century. She began exhibiting in 1852, showing at the British Institution (1852–1866), the Royal Academy of Art (1856–1993), the Royal Society of British Artists (1856), and the Royal Glasgow Institute (1861). She became a member of the Society of Women Artists in 1871. One of her paintings, Strawberries in a Glass Lid with Glass Bowl of Raspberries Behind (1896) hangs at Norwich Castle, which has the largest collection of works by Norwich School artists.