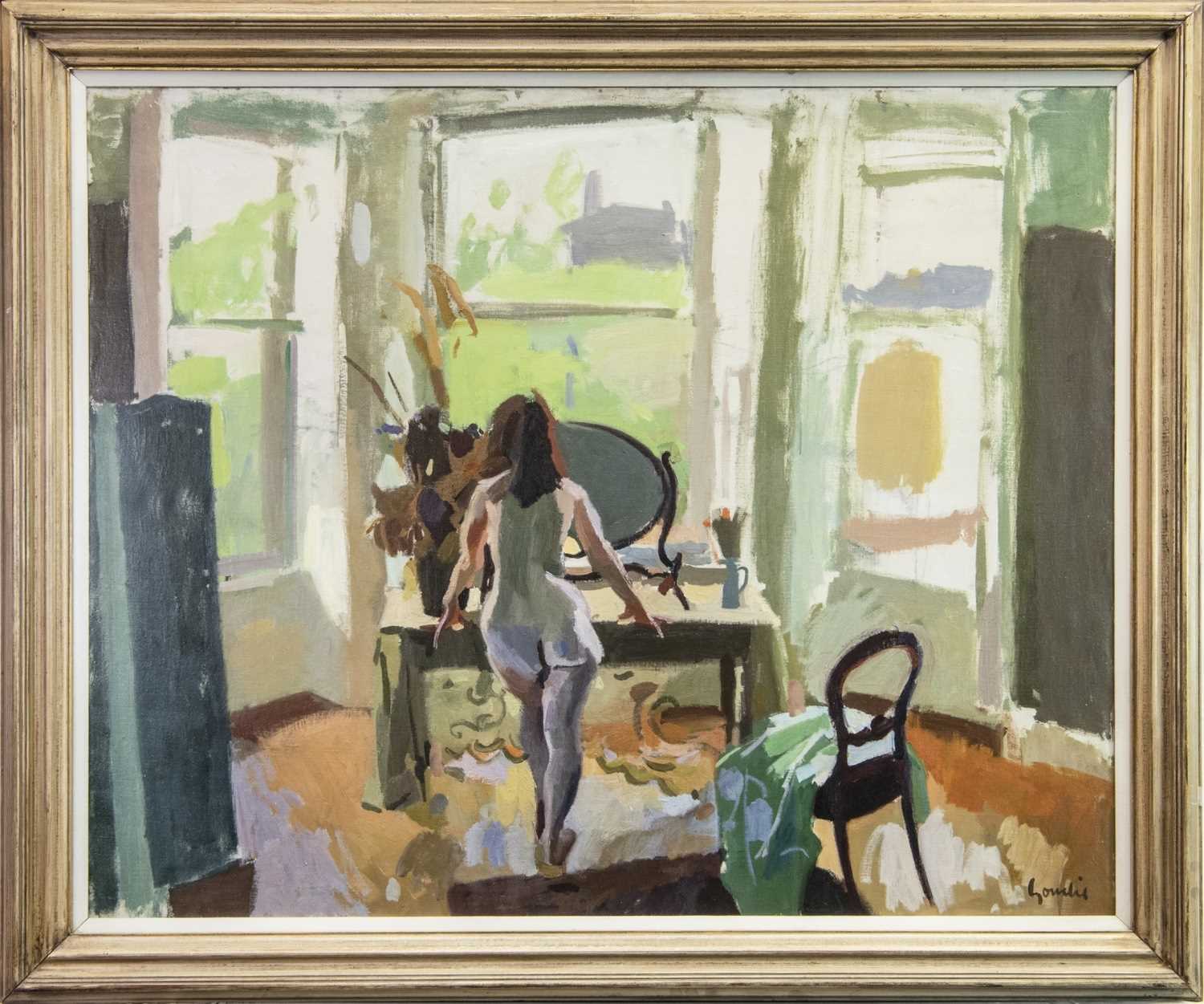 HEATWAVE, AN OIL BY ALEXANDER GOUDIE

* ALEXANDER GOUDIE RP RGI (SCOTTISH 1933 - 2004),
HEATWAVE
oil on linen, signed
86cm x 107cm (approx 34 x 42 inches)
Framed and under glass.
Partial label verso: Glasgow Art Club, with title and artist's address (Clevedon Road, Glasgow G12 0NT).
Provenance: Private Scottish collection since aquisition in 1970's. We are grateful to Lachlan Goudie, artist, writer, broadcaster and the leading authority on the work of his father, for authenticating this painting and confirming that the painting probably dates to the late 1970's and that the model is the artist's French wife Marie-Renee (Mainee). Furthermore, the location is Goudie's studio within the family home at Amewood House, Clevedon Road, Glasgow.
Note: Alexander Goudie was born in 1933 at Paisley and, as a child, showed prodigious talent for drawing. He studied at Glasgow School of Art when William Armour was head of drawing and painting and David Donaldson was the ubiquitous influence. Goudie, as a student at Glasgow, demonstrated his extraordinary ability. He received the Somerville Shanks Prize for Composition and, later, his draughtsmanship and sense of colour was recognized with the award of the Newbery Medal. As a young artist he grew up admiring three great masters, Sir John Lavery, George Henry and James Guthrie; all artists who had bridged the gap between Glasgow and Paris. It was these artists’ glorious virtuoso control of oil paint that appealed to Goudie, as well as their genre and realist subject-matter. Alexander Goudie was elected a member of the Glasgow Art Club in 1956 and a member of the Royal Society of Portrait Painters in 1970. He painted a portrait of the Queen for the Caledonian Club, London (1992/93), and exhibited widely, showing at Harari and Johns, in London, the Fine Art Society, Glasgow, and the Musee de la Faience, in Quimper. Sir Timothy Clifford, former Director of the National Galleries of Scotland, said: ''At his best, Goudie could draw better than any of his rivals in Scotland. There was magic and vision in his art and, I expect, history will be kind to him.'' Collections: 79 of Goudie's paintings are held in UK public collections including at Glasgow Museums & Galleries, The Hunterian, Rozelle House Galleries, Paisley Museum & Art Galleries and The Fleming Collection (London). Numerous prestigious corporate collections in the UK and France and in private collections around the world.