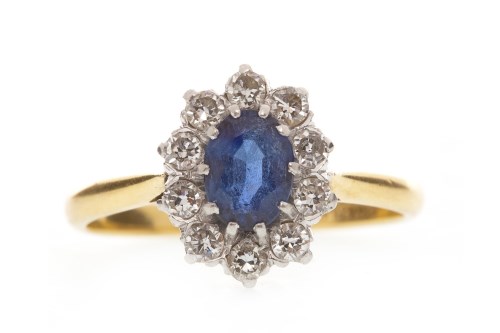 Condition report
In worn condition.
Generally scratched.
Blue gem = 6x5mm.
No inclusions visible within the blue gem.
Very slight abrasion to the girdle of the blue stone.
Diamonds to the naked eye:
Slight grey tint to them.
Too small to further analyse.
Diamonds under magnification:
Very slight black inclusions visible throughout some of the stones.
All stones intact.
Size K.

BLUE GEM SET AND DIAMOND RING set with an oval blue gem surrounded by round diamonds, marked 18ct & plat to the shank, 2.8g