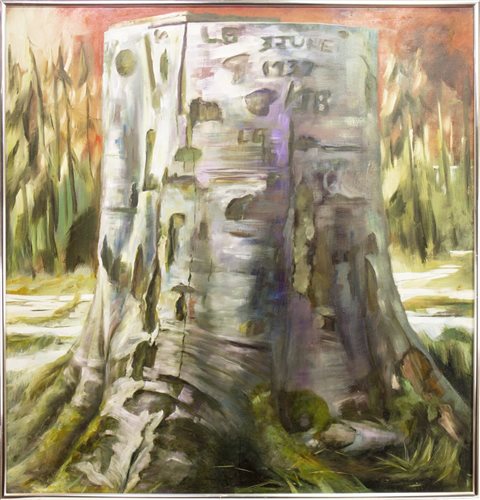 * STEPHEN BARCLAY (SCOTTISH b 1961),
HISTORIC TREE
oil on linen, signed, dated 1992 and titled verso
112cm x 106cm
Framed.
Note: Stephen Barclay first came to prominence in the 1980s as one of the internationally acclaimed ``New Glasgow Boys". He studied at The Glasgow School of Art between 1980 - 1985 winning a 1983 Scholarship to study at Hospitalfield, Arbroath and the 1984 Adam Bruce Thomson Award. His paintings have been exhibited worldwide and are held in numerous major public and corporate collections including The Metropolitan Museum of Art in New York, The Fleming Collection (London), The Deutsche Bank Collection, The Laing Art Gallery, The Cleveland Gallery, Bolton Museum & Gallery, Texaco Oil and The Gallery of Modern Art in Australia. Barclay's work very rarely appears at auction although a few small sketches and studies have sold in recent years and in January 2018 McTear's sold "Walled City II" (a 130 x 160cm oil on canvas, lot 21) for £1400 (hammer).