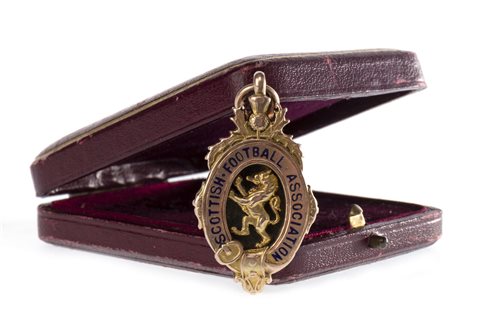 GOLD SCOTTISH CUP MEDAL AWARDED TO WILLIAM CRINGAN,
of shaped oval form, with central lion rampant motif in relief and with 'Scottish Football Association' in blue enamel, the reverse inscribed with 'Won by Celtic F.C.,1922-23, William Cringan', in nine carat gold, hallmarked for Birmingham 1922; along with two pictures of the player, one signed, and a programme for 'A Complimentary Dinner for the Celtic Football Team, Winners of The Scottish Cup, 31st March, 1925'
Note: William "Willie" Cringan (1890 – 1958) was a Scottish international footballer who played for Sunderland, Ayr United, Celtic, Third Lanark and Motherwell. The player's senior debut for the 'Bhoys' came in a 2-0 victory over their city rivals Rangers on the 12th of May 1917. He would later go on to captain the team until his departure in 1923. Cringan also captained Scotland in three games during the 1920s.