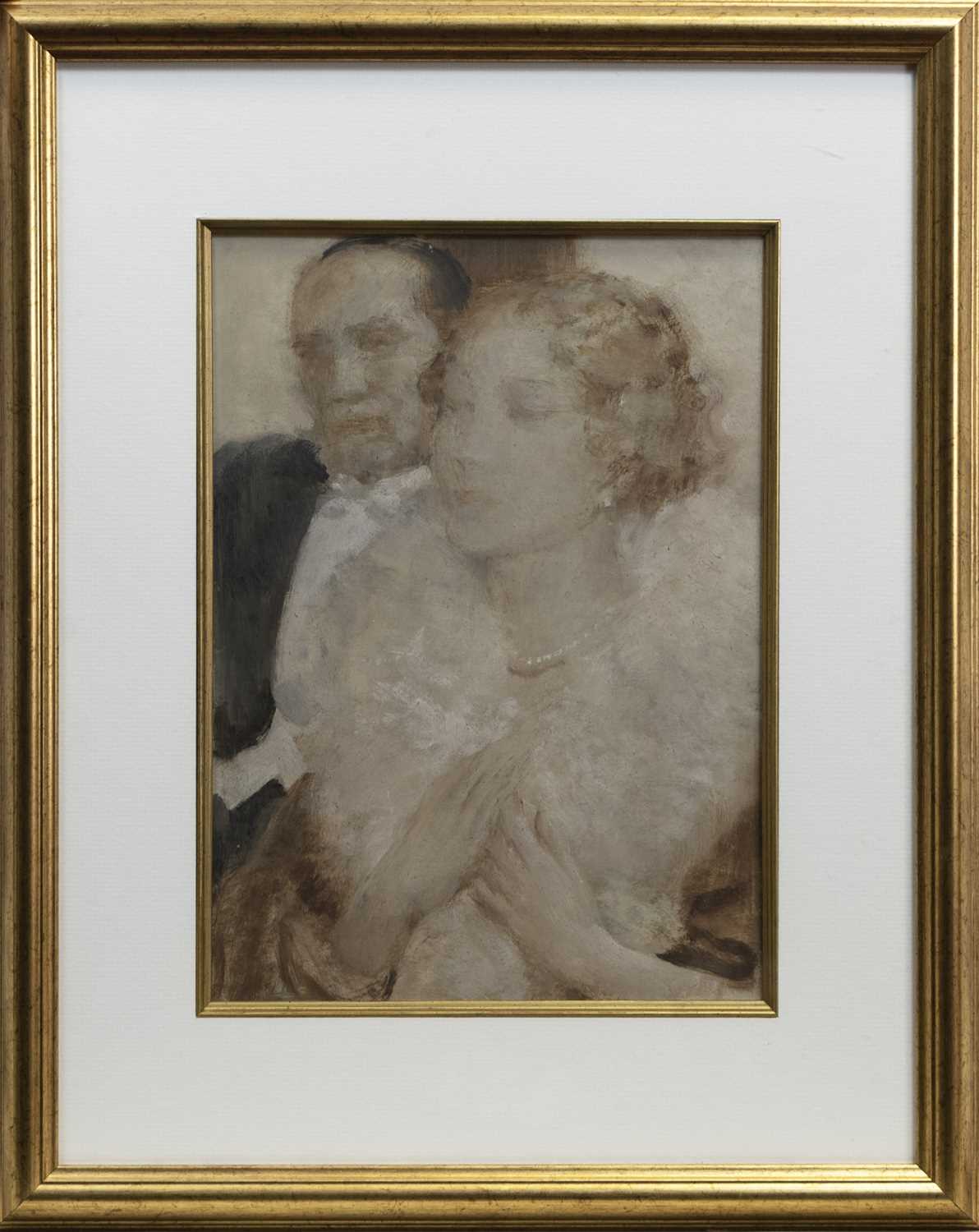 * JOHN BULLOCH SOUTER (SCOTTISH 1890 - 1972),
LONDON NIGHT OUT - MR & MRS J.B SOUTER
oil on board, attributed label verso
35cm x 25cm
Mounted, framed and under glass.
Provenance: Rendezvous Gallery, Aberdeen where exhibited in "John Bulloch Souter, A Retrospective Studio - Archive Exhibition" 23rd September - 22nd October 2016.
Note: John Bulloch Souter, was born in Aberdeen and studied at Gray`s School of Art. After serving in the Royal Medical Corps during World War I, JBS became a highly successful and celebrated portrait painter. Sitters included Gladys Cooper, Ivor Novello, Fay Compton, entertainers and celebrities of the era, academics, military officers and society figures. He exhibited at The Redfern Gallery, the Fine Art Society, Royal Scottish Academy and the Royal Academy. During World War II he worked in the Censorship Department as a translator. He also restored paintings from The Royal Collection at Windsor Castle. In 1926 his painting "The Breakdown" caused an international media storm and it was eventually withdrawn from the Royal Academy. The original painting was destroyed by Souter but he repainted a copy from the original sketches in 1962 which he amusingly dated 1926 - 62 and which was sold in Edinburgh in 2018 for £60.000. Souter married Christian Grace Reid in February 1926 at St Paul's Parish Church, Hammersmith. The couple were Jazz enthusiasts and were also regular visitors to the Opera. London was, and is, one of the most vibrant cities in the world and the diversity of entertainment appealed to the young Aberdonian and his beautiful wife. After 26 years of married life in London, Jack (as he was known to his friends and family) and Christian moved back to Aberdeen (1952) when JBS inherited "Kinnoull" 19, Anderson Drive in the city, from his sister Anne. Souter was a remarkably talented artist who painted an extraordinarily diverse range of subject matter in a variety of styles and mediums. He painted one of the most controversial British pictures of the 20th century and in so doing, possibly inadvertently, highlighted prejudices virulent in the 1920s and still resonant and acutely "current" almost a century later.