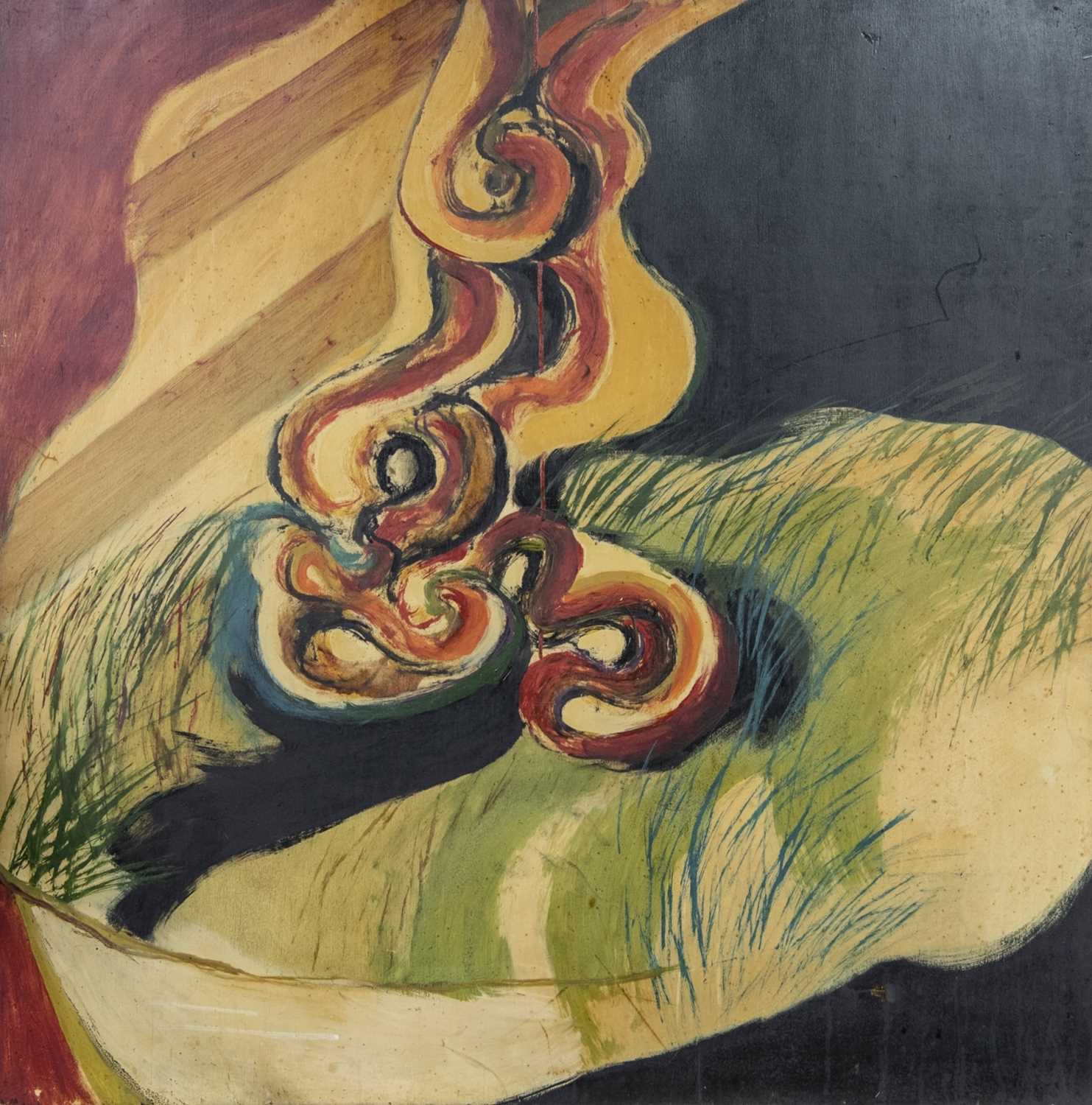 * WILLIAM CROZIER HRHA (SCOTTISH/IRISH 1930 - 2011),
VINE FALL
oil on panel, signed and inscribed verso with the title
overall size 102cm x 100.5cm
Unframed.
Provenance: Compass Gallery label verso.
Note 1: Undated but from the "Vine & Pit" series circa 1963.
Note 2: Painter and teacher, born at Yoker, Glasgow to Irish parents. William Crozier grew up in the quiet seaside town of Troon, Ayrshire and regularly visited Ireland. He studied at The Glasgow School of Art, 1949–53. From the mid-1950s he travelled widely in Europe. He then taught at Bath Academy of Art, the Central School of Arts and Crafts and Winchester School of Art. He retired as head of fine art there in 1987 to devote all his time to painting. From 1957 Crozier had a series of solo exhibitions at Drian Galleries (London), abstracts with landscape references. He was influenced at this time by American Abstract Expressionism. His later work employed more obvious landscape references, but vibrant colour and vitality continued to be key elements. He typically painted with rapid, expressive brushstrokes, in bright, contrasting colours, often disregarding traditional rules of perspective and structure. Solo exhibitions included Arthur Tooth & Sons, London (1959, 62, 63, 64); Drian Galleries, London (1958, 60, 61, 62, 65, 68, 70); The Scottish Gallery, Edinburgh and London (1985, 89, 90); Compass Gallery, Glasgow (1969, 75); Richard Demarco Gallery, Edinburgh (1968, 83), Madeleine Gallery, Paris (1960); National Museum, Gdansk (1990); Taylor Galleries, Dublin (1991); and career retrospectives at the Royal Hibernian Academy’s Gallagher Gallery and the Crawford Municipal Gallery in Cork (1990). The Scottish National Gallery of Modern Art gave him an important show in 1995, with another at Fenton Gallery, Cork, Ireland, 2002. In the 1980s he started living part-time in West Cork. He celebrated his 80th year with a large exhibition of his current work at the Flowers Gallery (London) while a concurrent exhibition of his paintings of the 1950s and 60s at the Pyms Gallery, also in London, triggered a reappraisal of his early painting. Acquisitions of his work by the Tate Gallery and the National Gallery of Ireland quickly followed. William Crozier's work is held in public collections in Ireland, the UK, around Europe and in the US.