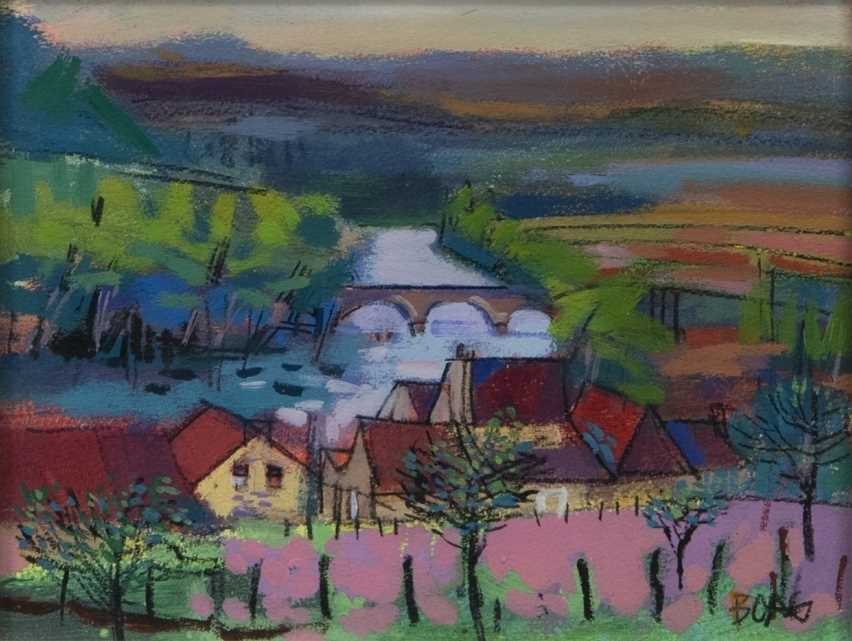 BRIDGE ON THE RIVER VEZERE, AN ACRYLIC BY FRANCIS BOAG

* FRANCIS BOAG,
BRIDGE ON THE RIVER VEZERE
acrylic on board, signed, label verso
20cm x 25cm
Framed and under glass
Note: The Vezere river crosses the east of the department with the most popular part of the Vézère running north-east from Limeuil, where it meets the Dordogne, to Montignac and the Lascaux caves. To the north of the department are the Isle river and the river Dronne.
Note 2: Born in Dundee in 1948, Francis Boag is a leading figure amongst a group of painters often labelled the ‘New Scottish Colourists’. In a career spanning more than 50 years, he has taught in schools in Dundee, Perth and Aberdeen. His vivid, and instantly recognizable, paintings have found their way into a host of public buildings such as airports and hospitals and are sought after by large corporate collectors including John Lewis plc, Baxters Food Group and the Royal Bank of Scotland. In 1964, at barely 17 years of age, he won a place at Duncan of Jordanstone College of Art and Design in Dundee and studied under the then Head of Painting, the larger than life, Scottish-Italian painter Alberto Morrocco and his Deputy David McClure. Upon graduation, Francis’ professional career was dictated by the rhythm of school life. After completing an MA at Gray’s School of Art in Aberdeen and nearly 30 years teaching, Francis decided to challenge the maxim, ‘those who can, do and those who can’t, teach’ and in 2001 went on to achieve a life-long ambition of making a career as an artist. His paintings are less about copying a scene, than creating a representation of it, a representation which has to be on the one hand a recognisable place or space but also a world where the imagination is unleashed. Polls published in the press in Scotland and Ireland have both placed him in their lists of top 50 best-selling artists, and he is one of only a few artists who has work in the National Collections of both countries. For many years he has donated images of his work to the children’s charity, UNICEF who have recently published a Box set of his Scottish landscapes and in 2015 his Christmas card design was UNICEF’s top seller, raising more than £35,000 for the Charity.