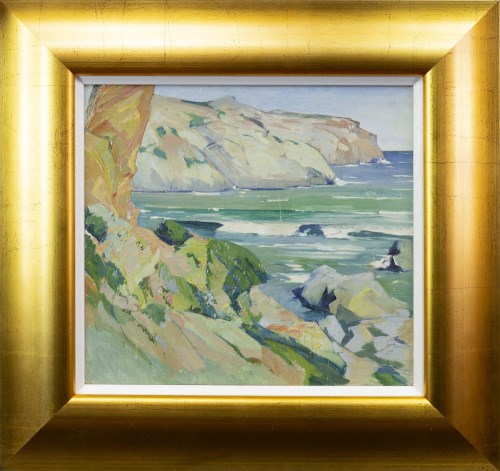 HANS PAAP (USA 1890 - 1966), MAJORCA COAST SCENE oil on canvas, signed on label fragment verso 36cm x 40cm Framed Note: Hans Paap was born in Germany and worked as an art director for motion pictures in Berlin for two years. After WWI, he spent the next 13 years in Argentina and Brazil. Leaving South America, he moved to Hollywood in 1928 and was active in Southern California through the early 1930s. He then moved to New Mexico where he was associated with the Taos Art Colony and Los Cinco Pintores. Paap exhibited at the Biltmore Salon in Los Angeles in 1928 and at the Pasadena Art Institute in 1929. Hans Paap was known to have visited and worked in Majorca and on 29th September 2011 Christie's London sold ''Peurto Pollenca, Marjorca'' a 23 x 27 inch oil on board (lot 385) by Paap for £2125 (premium).