MARIQUITA IN A SQUALL OFF FALMOUTH, A WATERCOLOUR BY ALEXANDER CRESWELL 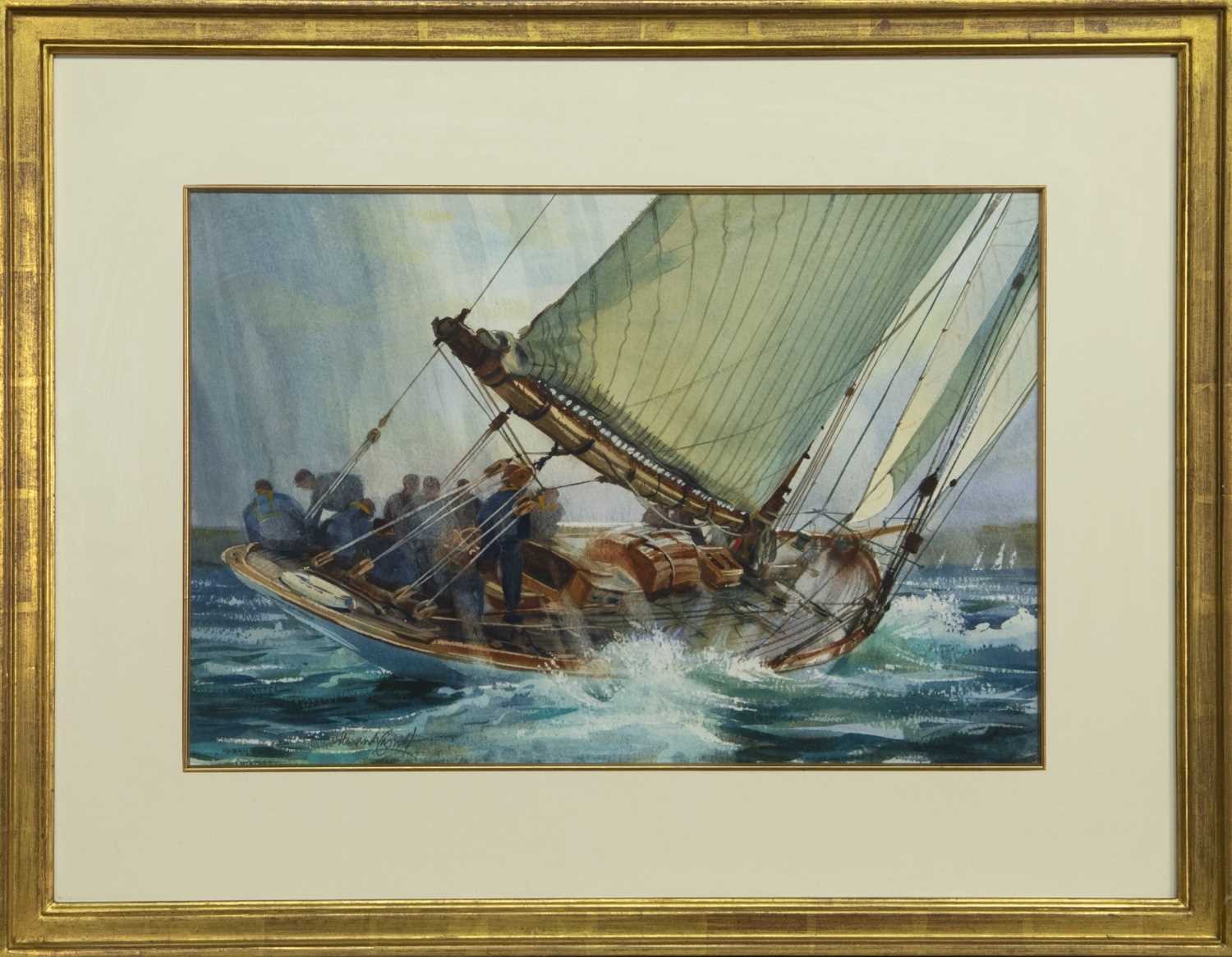 MARIQUITA IN A SQUALL OFF FALMOUTH, A WATERCOLOUR BY ALEXANDER CRESWELL

* ALEXANDER CRESWELL (BRITISH b. 1957),
MARIQUITA IN A SQUALL OFF FALMOUTH
watercolour on paper, signed, titled label verso
image size 37cm x 55cm, overall size 62cm x 79cm
Mounted, framed and under glass.
Label verso: Portland Gallery, London.
Note 1: Alexander Creswell (born 1957) is an internationally celebrated artist known for his extraordinary fluency and technical skill in watercolour. He is largely self-taught. His distinctive style in watercolour combines subtle colouring and skilful draughtsmanship alongside a deep reverence for natural light. Creswell exhibits regularly to critical acclaim in New York, London and Dubai. Commissions include: HM The Queen, Lying in State of HM The Queen Mother, The House of Lords, Lying in State of HM The Queen Mother, The Royal Collection, Windsor Restored, Coutts Bank, 100th Birthday Gift to HM The Queen Mother, The Royal Collection, Windsor Castle after the fire of 1992, The Prince of Wales’ s Institute of Architecture, The Duchy of Cornwall, The Parliamentary Art Collection, Westminster, The Duchess of Northumberland, Alnwick Gardens Project, English Heritage, HSBC Middle East, Royal Bank of Scotland, The British School at Rome, The BBC, GNI Ltd, Chartered Association of Certified Accountants, The London Capital Club, Speyhawk plc, British & Commonwealth, Guinness Peat, Glaxochem, Wiggins Teape, Burmah Castrol, Cawdor Castle Tourism and many more. Very few of Creswell's pictures appear at auction but a watercolour of similar dimensions (37 x 55cm) to "Mariquita in a Squall Off Falmouth" was sold by Sotheby's London for £4080 (premium) - lot 147 25th May 2006.
Note 2: The Yacht Mariquita was built by William Fife III and was launched at Fairlie on the Clyde in May 1911. She was part of a new generation of racing yachts, the new 19m Class which was a descendant of the historic Big Class racing and a precursor of the J-Class which arrived in the 1930s. In the early 1990s Mariquita went through major restoration (by Fairlie Restorations) and once re-built she set sale again taking part in countless regattas including Monaco Classic Week, Regates Royales Cannes and Les Voiles de Saint Tropez. In 2014 she was victorious, taking home the Big Boat Panerai Trophy. Mariquita's timeless elegance and incredible pedigree has contributed to her being widely regarded as one of the most beautiful historic racing yachts afloat today.