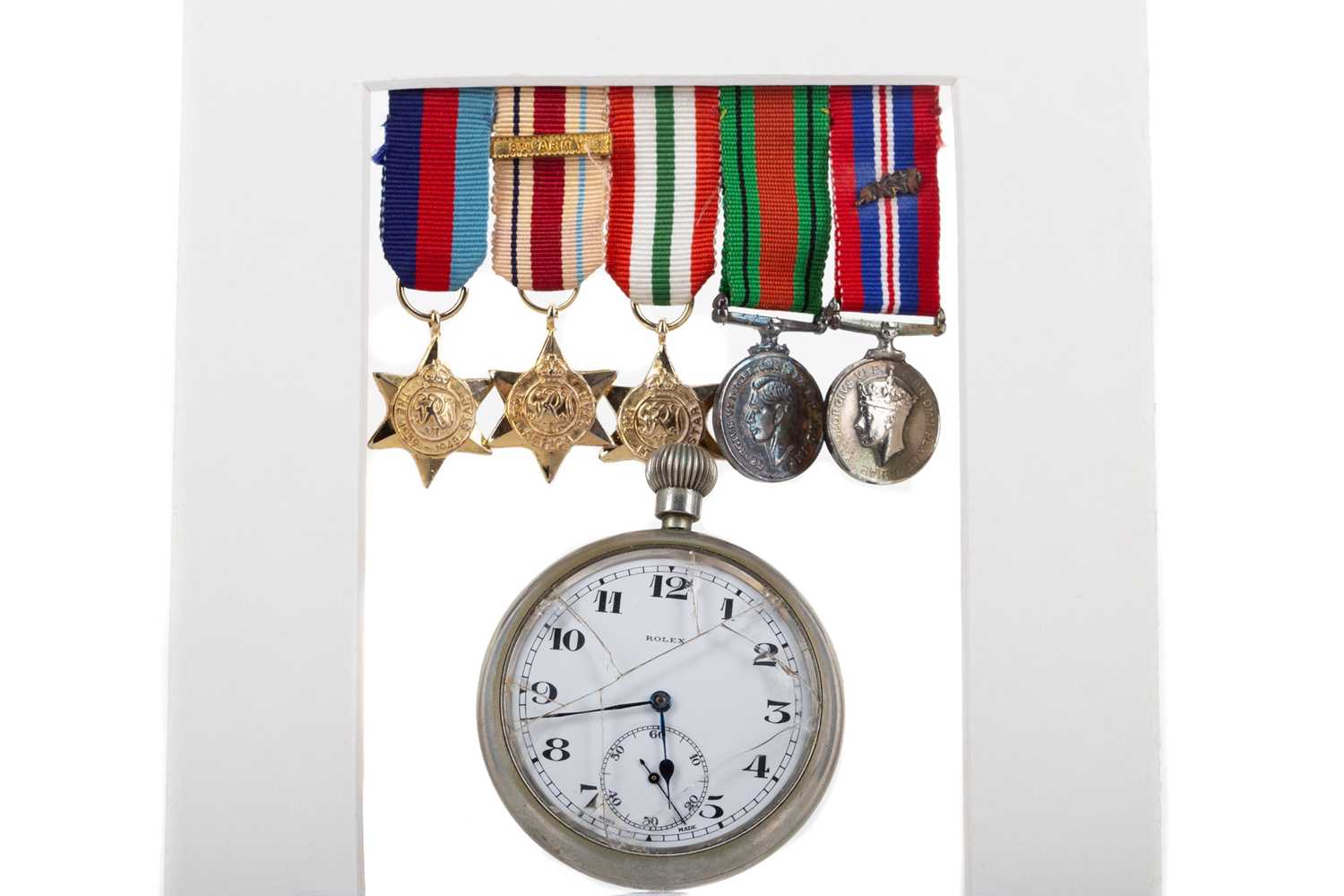 HISTORICALLY IMPORTANT WWII ROLEX MILITARY STAINLESS STEEL POCKET WATCH ,
circa 1939, the round white non luminous dial signed 'ROLEX', with Arabic hour markers, outer railroad seconds track in black, subsidiary dial at 6, 52mm case with broad arrow, 'B' and '5745' to the caseback and 5745 to the case edge, 15 rubies, calibre 548 movement signed 'ROLEX', along with a collection of miniature medals awarded to Sergeant Wilfred Henry Birch, the medals include the 1939 - 1945 Star, the Africa Star, the Italy Star, the WWII Defence Medal and the WWII War Medal with King's Commendation Oak Leaf

The Battle of Dunkirk was a massive military campaign during World War II whereby 338,000 British Expeditionary Force and other Allied troops were evacuated from Dunkirk as German forces closed in on them.

For eight months after Prime Minister Neville Chamberlain declared war on Nazi Germany, there was a period of stalemate known as the ‘Phoney War’ which all changed on the 10th of May 1940 when Germany launched a devastating attack on France and the low countries, known as the blitzkrieg or ‘lightning war’. The German forces invaded France through the Ardennes Forest moving steadily along the Somme Valley and towards the English Channel. As they advanced, they pushed the several hundred Allied troops into a very small pocket of the French coast. Meanwhile, Neville Chamberlain had resigned and Winston Churchill stepped up to the plate. At first, the British Government opposed evacuation but as the troops were forced onto the port of Dunkirk, this soon became the only answer as if the British troops were captured, we would have lost the war. The troops appeared doomed however they would soon receive a helping hand from an unlikely source: Adolf Hitler.

So convinced that his army would crush their enemies, Hitler decided to briefly halt advances of German troops bearing down on Dunkirk, known as the ‘Fuhrer Halt Order’, on the 24th of May as he was worried about a counterattack but he also believed that his air forces could prevent any evacuation attempts. This was considered the turning point of the war and inevitably, one of Hitler’s most critical mistakes that cost him the war. By the time that Hitler recommenced the attack, the Allies had gained precious time to put preparations in place to plan their evacuation and the only way out was via the water.

On the 26th of May, German forces resumed the attack and the evacuation, known as Operation Dynamo began. As Dunkirk had such a shallow beach, Navy vessels couldn’t reach the shore and the Allies put out a call for smaller ships to carry troops from the shore to the larger ships. Some were requisitioned by the Navy and others were manned by civilians. Over 1000 ships aided in the evacuation of Dunkirk and became known as the ‘Little Ships’ and this armada was imperative to the eventual rescue of 338,000 men. Whilst under constant gunfire, these brave troops stood shoulder deep in the freezing cold water, patiently waiting to be rescued. The unrelenting German bombardment meant that rescue ships were destroyed and many lives lost during the rescue attempt.

There were still instances of fighting and another evacuation, Operation Aerial, took place between the 15th to the 25th of June for troops who had made their way to other ports in Western France. Famously, the RMS Lancastria, one of the rescue vessels carrying thousands of troops and civilians, was attacked and quickly sank with a mass loss of life.

Resistance ended on the 4th of June and the German troops occupied Dunkirk. They hoped that the Dunkirk defeat would lead Britain to negotiate an exit from the conflict but instead, the Miracle at Dunkirk would become an iconic symbol of the British spirit, with Winston Churchill delivering his iconic speech, ‘We shall go on to the end… we shall not surrender.’ This is a testament to the many brave men that tragically lost their lives during the battle, reminding us that their sacrifice brought the salvation of the British nation.

This brings us to the incredibly impressive Rolex military pocket watch featured in the upcoming Watches Auction. These pocket watches were available circa 1939 either with a black or white dial. The white dial version was not intended for pocket use and the case was constructed without a chain bow. This particular example was manufactured so that it could be entered within a receptacle within a protective wooden case or on a vehicle instrument panel. Engraved with a ‘B’ to the reverse, this was designated by the Army as a ‘B type’ or backup timepiece to a chronometer watch. The snow white dial signed Rolex, shines brightly through the cracked glass and the story behind this should serve as a reminder of British history for generations to come. This brings us to the story of Sergeant Wilfred Henry Birch.

Wilfred was born on the 24th of December 1917 and attended grammar school until he joined the army at the tender age of 22 as the conflict was just getting underway. During his career, Wilfred held three stripes on his uniform and earned the King’s Commendation Oakleaf for brave conduct.

Throughout World War II, he was stationed in France and during Operation Aerial, Wilfred was given orders not to board RMS Lancastria but to stay behind and destroy equipment left behind by the BEF and Allied troops. This command would save Wilfred’s life as he miraculously avoided the ship which would later perish making it the largest maritime loss of life ever suffered by the Royal Navy.

During this command to destroy British defence equipment, Wilfred came across the Rolex pocket watch which had been left behind on the shores where Wilfred picked it up. It is reported that the glass was smashed upon his escape from France and although badly cracked, this remains in place within the watch. This is an ironic composition given the fragility of the glass which has remained intact under relentless attacks from Nazi Germany.

After serving in France, Wilfred later went on to serve in North Africa, Egypt and Italy. After his service in the Army, Wilfred returned to work for Goodyear and had two beloved children and three grandchildren. Later on in life, Wilfred ran a post office in Wallasey until he retired.

This incredible lot is offered with a collection of miniature medals awarded to Wilfred throughout his Army career. These include the 1939 - 1945 Star, the Africa Star, the Italy Star, the WWII Defence Medal and the WWII War Medal with King's Commendation Oak Leaf. These are a fantastic addition to the pocket watch which has been kept within the family ever since and will ensure that the Battle of Dunkirk and the sacrifice of all British troops during World War II will always be reflected upon with admiration.

The above information was supplied to us by the current vendor who is Sgt. Wilfred Henry Birch's grandson which we believe to be factual.

The condition of watches offered at auction varies widely due to factors including age, possible restoration, repair and general wear and tear. Condition reports relate to watches’ condition at the time of inspection by McTear’s specialists, McTear’s cannot guarantee watches to function beyond that point. Watches are not tested in house for accuracy, duration or water tightness. Buyers should assume that all watches purchased will require regular servicing to be useable and reliable. If McTear’s have been unable to open a watch case safely then the completeness and functionality of the movement within cannot be commented on or guaranteed. McTear’s cannot offer any form of guarantee that movements and/or all component parts are original to any watch.