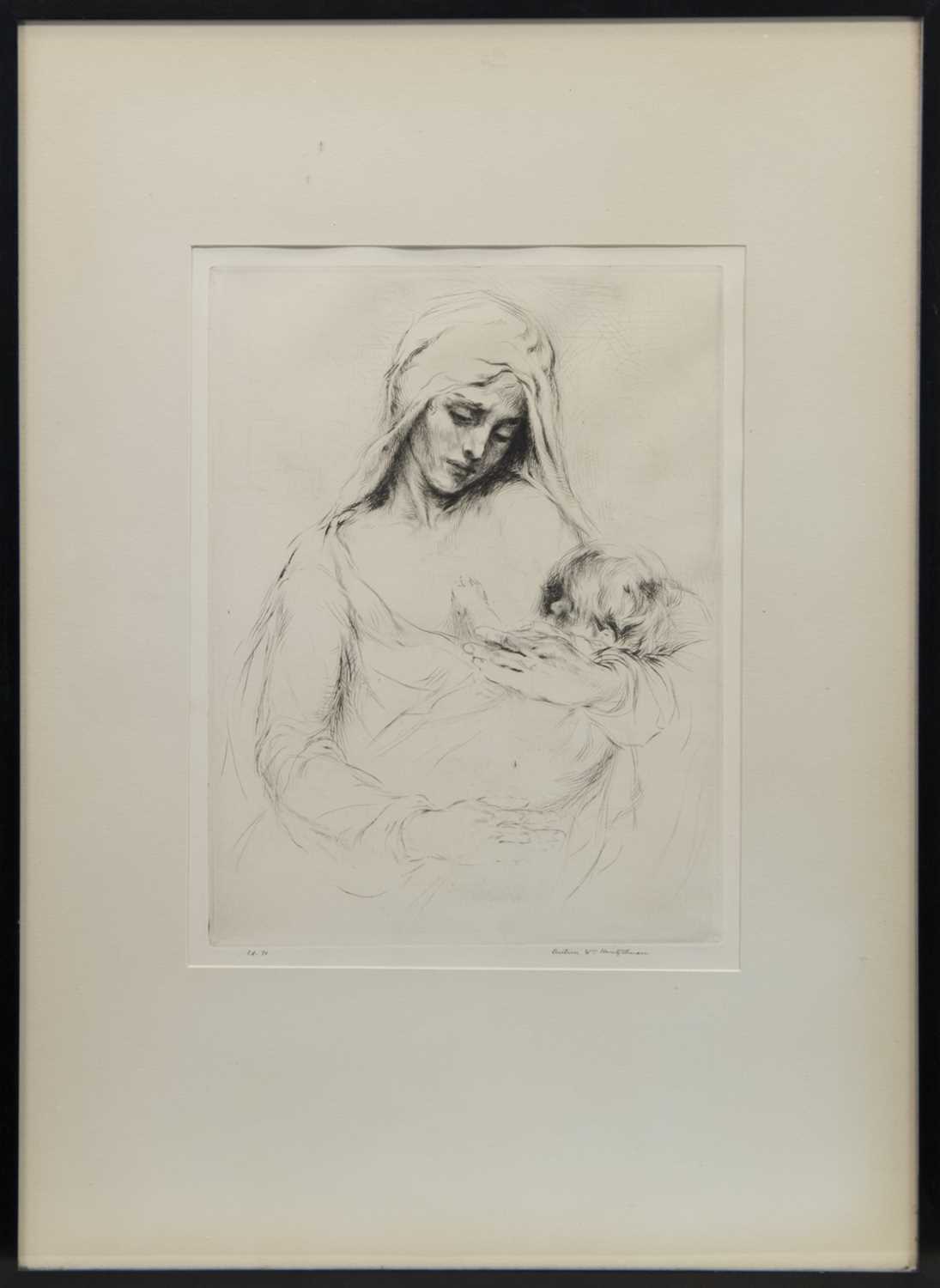 ARTHUR WILLIAM HEINTZELMAN (AMERICAN 1891 - 1965),
LA VIERGE ET L'ENFANT JESUS (Smith 155)
drypoint etching on cream laid paper, 1929; edition of 70, signed in pencil
30cm x 23cm
Mounted, framed and under glass
Note: Born in Newark, New Jersey, Arthur William Heintzelman was a painter, etcher, copyist, teacher, and curator. Raised in Providence, Rhode Island, he first studied art at the Rhode Island School of Design, where he subsequently taught, and also in Europe. In 1921, the Heintzelmans moved to Paris and made their home in France, subsequently moving to Switzerland in 1931 and remaining there until 1934, when they returned to the United States. Already widely respected as a printmaker prior to his departure for Europe, he became internationally famous during his years abroad and was - and is - regarded as one of the greatest etchers of the Twentieth Century. During his years in Paris, Heintzelman met Eugène Delatre, who became his printer for the remainder of his stay in Europe, and who taught Heintzelman the intricacies of fine art printmaking for which his atelier was justly famous. In appreciation for his contribution to French art and culture, Heintzelman was named to the Legion of Honour by the French government. Following his return to the United States, Heintzelman became the first Keeper of Prints at the Boston Public Library and served there from 1941 to his retirement in 1960. Thanks to his close relationship with the Delatre family, Heintzelman coordinated the gift of the comprehensive collection of prints by both Auguste and Eugène Delatre to the Boston Public Library. He was succeeded as Keeper of Prints by Sinclair Hitchings. Heintzelman also headed the Fine Arts department of the Rhode Island School of Design. He was awarded numerous international prizes for his etchings, and his works are found in museum collections through the US and Europe. Heintzelman belonged to numerous professional associations both in the US and abroad. He lived and worked in Boston, Marblehead, and Rockport, Massachusetts and in New York City. He died at Rockport, Massachusetts. The works of Heintzelman are documented in The Prints of Arthur Wm. Heintzelman, the catalog raisonné compiled by Donald Eugene Smith and published by the Boston Public Library (USA) in 2004.