WOMEN ON THE MIND - DON GIOVANNI 1995, A LARGE OIL BY PETER HOWSON 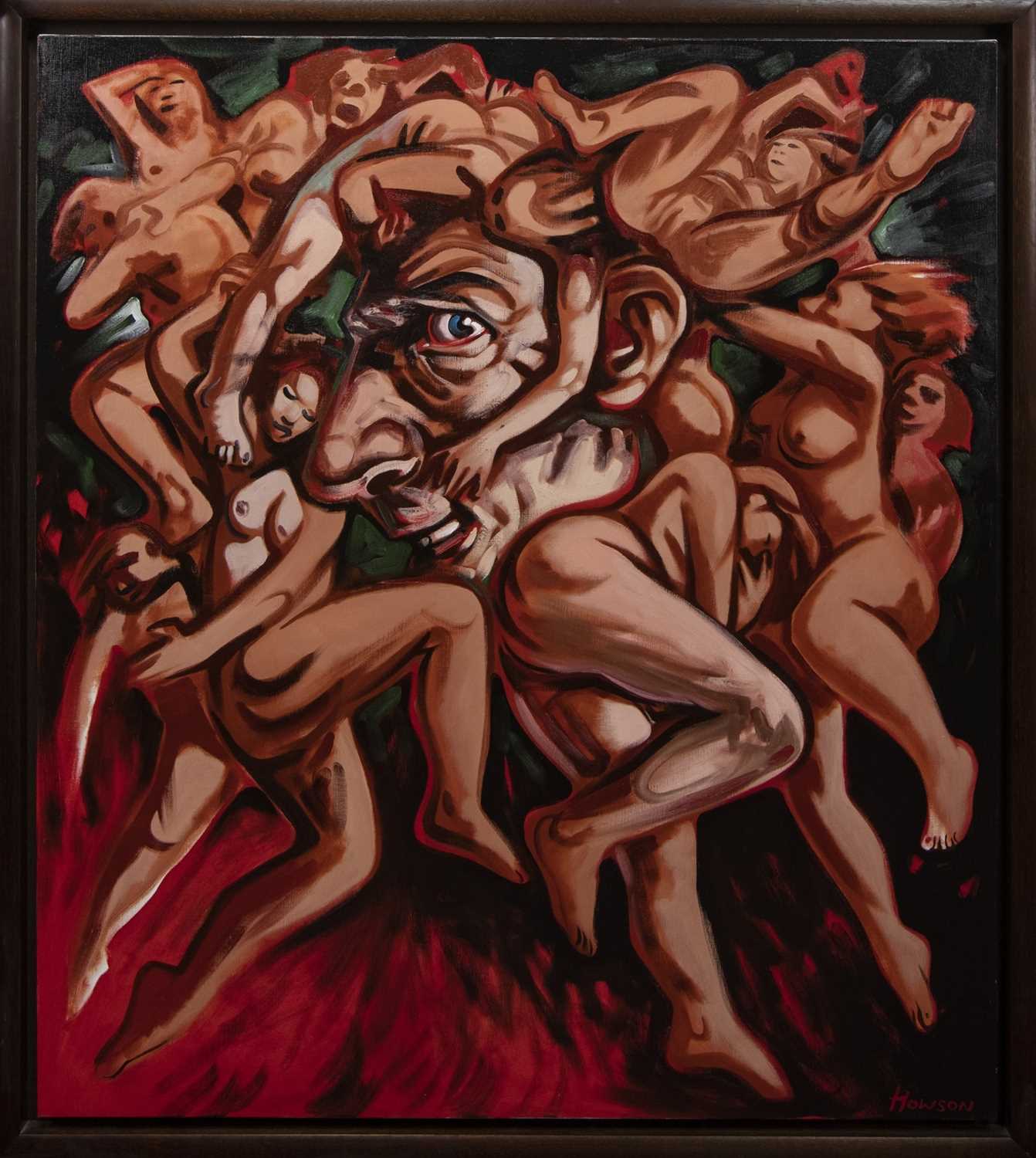 WOMEN ON THE MIND - DON GIOVANNI 1995, A LARGE OIL BY PETER HOWSON

* PETER HOWSON OBE (SCOTTISH b. 1958),
WOMEN ON THE MIND - DON GIOVANNI 1995
oil on canvas, signed
image size 123cm x 107cm, overall size 132cm x 117cm
Framed.
Note: In 1995 Peter Howson collaborated with John Cox and the Scottish Opera on a new production of Mozart’s Don Giovanni. In an amazing interview with the Glasgow herald in 1995 Howson commented: “It’s an incredible opera and a fantastic opportunity. I’ve got the opera bug now. Everything to do with Don Giovanni is curvaceous and sexy. The rest is sharp, pointed and angular. I’ve kept the colour scheme very simple: rich scarlet, vermilion, and cherry red for Don Giovanni’s territory: his bedroom, ballroom, the wedding party scenes, and for Hell. Soft greens, greys and cream for the rest. Howson produced 300 preparatory drawings for the Opera, together with a group of Oil paintings which were exhibited at Bilcliffe fine art, Glasgow in September 1995. These works were inspired by the party scene nudes in the opera. Howson explained in the interview with the Herald: 'There are hundreds of nudes everywhere, some friendly, some demonic. It's like Dante's Inferno. Don Giovanni is a man of incredible sexual appetite and John Cox wanted this depicted in a Rubenesque way: not pornographic or smutty, but with as much nudity as Scottish sensibilities allow. There's even nude caryatids and statuary carved over the door to his palace. Although Scottish Opera's audiences can be terribly Calvinistic. They don't want too much said about the nudes in case people cancel their tickets!'' Surely not? ''It's true. It happened once before with Life with an Idiot. I see Don Giovanni as the life force. His bed is red; his dressing gown is opulent, flowing gold and red. Of course, he's amoral, what used to be known as a libertine and blasphemer, but he's also a free-thinker, a man before his time, a revolutionary who rejects the religious and sexual code of his society. He's defiant and unrepentant. He never forces himself on women, merely seduces. His affair with Donna Anna is the first time in his amorous career that things have gone wrong. He doesn't feel guilty for the Commendatore's death as the duel was fought in self-defence. When he's dead the town stagnates and misses him. The Don Juan story has always been popular even in folklore. Back in 1787 when the opera was first performed in Prague it must have seemed scandalous but today it's not so. We've tried to avoid setting the opera in any specific period. Hopefully, it's timeless.''
Provenance: Sotheby's, Gleneagles, lot 1024, 31st August 2005, estimate £10,000 - £15,000.