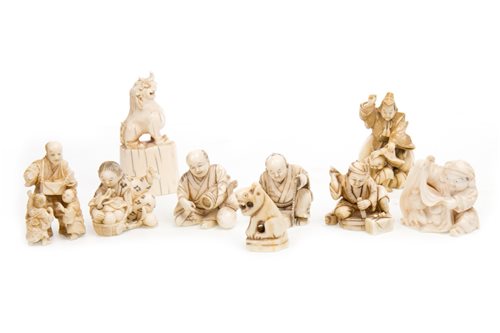 
Seal shows splits to the ivory, the carving of man and mice has a crack and loss to mouse ear, the carving of man with hammer has a piece missing to the front left as you look at it, the carving of boy and fruit has loss to the fruiting leaf at the basket and something appears to be missing from his hand, the warrior striking the crouching figure has an area of his sword missing at his back, the figure of man and two boys is damaged to the hand of the man and to the foot of one boy.

COLLECTION OF NINE LATE 19TH/EARLY 20TH CENTURY JAPANESE IVORY CARVINGS,
including two figure groups, the taller 5.5cm high; along with a netsuke and a seal (9)