SPRING BY THE BUCKLAND BURN, AN OIL BY WILLIAM STEWART MACGEORGE 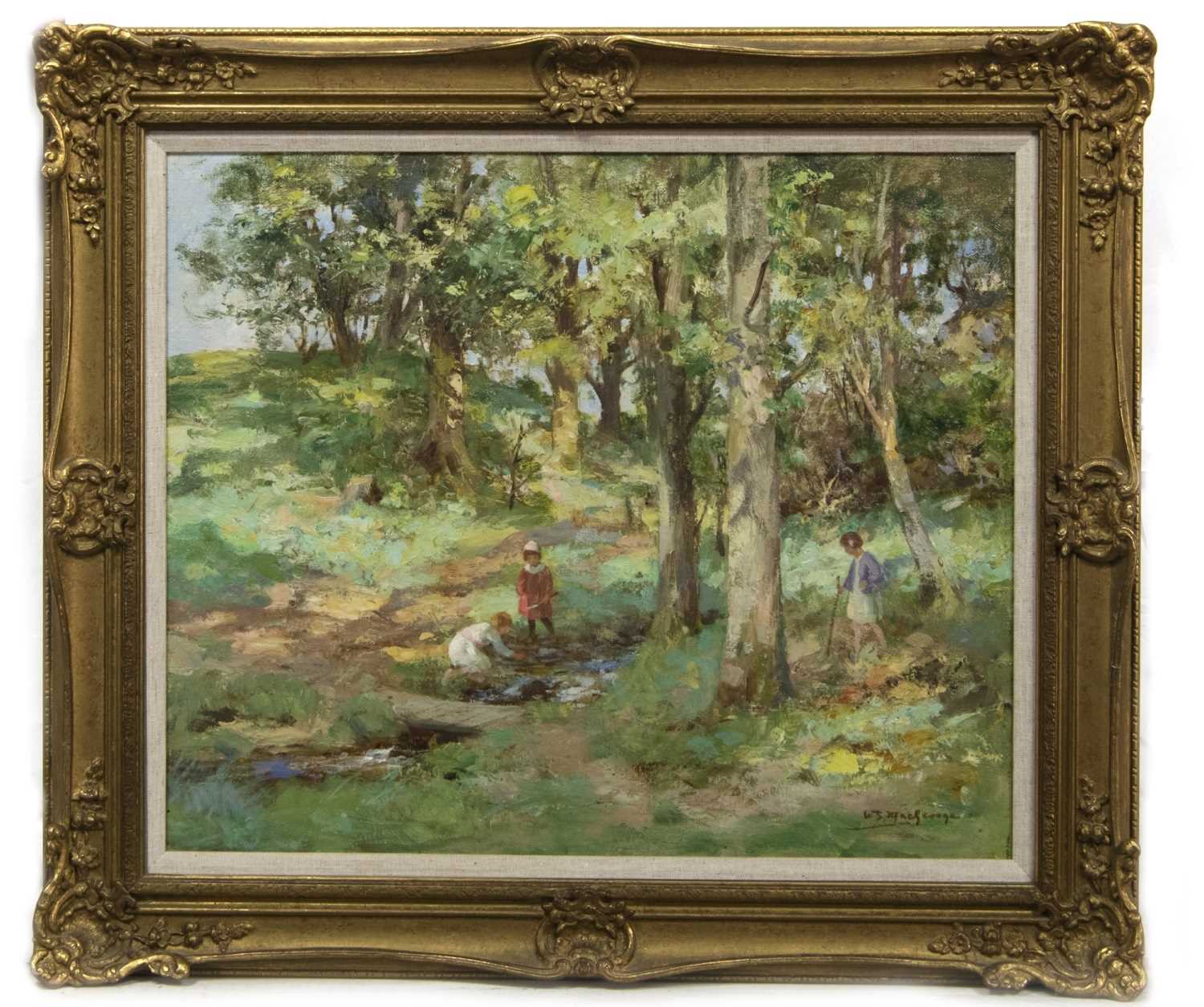 SPRING BY THE BUCKLAND BURN, AN OIL BY WILLIAM STEWART MACGEORGE

WILLIAM STEWART MACGEORGE RSA (SCOTTISH 1861-1934),
SPRING BY THE BUCKLAND BURN
oil on canvas, signed, titled label verso
image size 51cm x 61cm, overall size 67cm x 77cm
Framed.
Label verso: Ian MacNicol, Glasgow.
Provenance: From a Private Scottish Collection.
Note: William Stewart MacGeorge was born in King Street, Castle Douglas on 1 April 1861. Like his friend E A Hornel, he was the son of a shoe-maker. His father was David MacGeorge who, according to the 1861 census, was the employer of three men and a boy. He attended the Free Church School in Castle Douglas, where a fellow pupil was S R Crockett. Crockett included his childhood friends as characters in his 1894 novel The Raiders, and captures MacGeorge’s happy disposition in the character Jerry McWhirter, “a roguish fellow that came to me to help with my land surveying but was keener to draw with colours on paper, the hues of the landscape and the sea. But he was dearest to us because of his continual merry heart, which did us good like a medicine.” MacGeorge entered the Trustees Academy in Edinburgh in 1880 along with fellow Galloway boys E A Hornel and Thomas Bromley Blacklock. In 1881 MacGeorge and Crockett were lodging together at 50 St Leonard Street (Edinburgh). MacGeorge was a successful student being a prize-winner in his second and third years at art school, and had a work shown in the Royal Scottish Academy in 1881. In 1883 MacGeorge and Hornel enrolled in Antwerp’s Academie Royale des Beaux-Arts, where MacGeorge again excelled under the rigorous discipline of Charles Verlat. On his return to Scotland, he enrolled in the RSA Life Schools in Edinburgh, where he continued his studies and embarked on his professional career. Thereafter, MacGeorge divided his life largely between Edinburgh and Galloway. He lived at 11 Melville Place, Edinburgh during the winter and had a studio in Kirkcudbright in the summer. Works such as A Galloway Peat Moss, displayed in the National Gallery of Scotland, is a fine example of a plein air realist work showing the influence of Jules Bastien–Lepage on Scottish artists while his Halloween, shown at the RSA in 1893, and to which he returned in his diploma work of 1911, is an example of his interest in childhood rituals. The painting was well received when shown later that year at the Paris Salon. W S MacGeorge was the most naturalistic of the Galloway artists. Informal scenes of children at play are typical of his work. Another favourite subject was the salmon fishers and their nets on the Dee at Kirkcudbright. Commenting on the RSA exhibition of 1910 The Studio observed, “One of the outstanding landscapes is Mr W S MacGeorge’s view of salmon fishers at dusk drawing their nets in the estuary of the Kirkcudbright Dee”. Relatively late in his life, MacGeorge married Mabel Victoria Elliot, a watercolour painter and widow of the artist Hugh Munro and settled at Gifford near Haddington. Ninety-nine of William Stewart MacGeorge's paintings are held in UK Public Collections. In The British & International Pictures Auction (McTear's) of 18th November 2020, lot 101, "The Hedgehog" a 51 x 61cm oil on canvas by W.S. MacGeorge sold for £12,000 (hammer).