For many, whisky and Scotland are inextricably linked. Although Scotch whisky is very tightly regulated with the liquid itself having to be distilled and matured in Scotland, most bottlings are the result of various international contributions. For example, barley from mainland Europe, washbacks made from Oregon pine and ex-sherry casks from Jerez, Spain. Lot 1012 in Friday’s Rare & Collectable Whisky Auction at McTear’s has unmistakeable influence from three very different regions: Campbeltown, Portugal and China.

The lot comprises two expressions produced at Springbank Distillery in Campbeltown. One of the few independent distilleries left in Scotland, Springbank (which also produces triple-distilled Hazelburn and heavily-peated Longrow) is one of the most popular with whisky purists due to their traditional production methods and their refusal to use caramel colouring or chill-filtration. The whisky was created by Springbank’s former Director of Production Frank McHardy, and has the depth and complexity of character that Springbank is synonymous with. 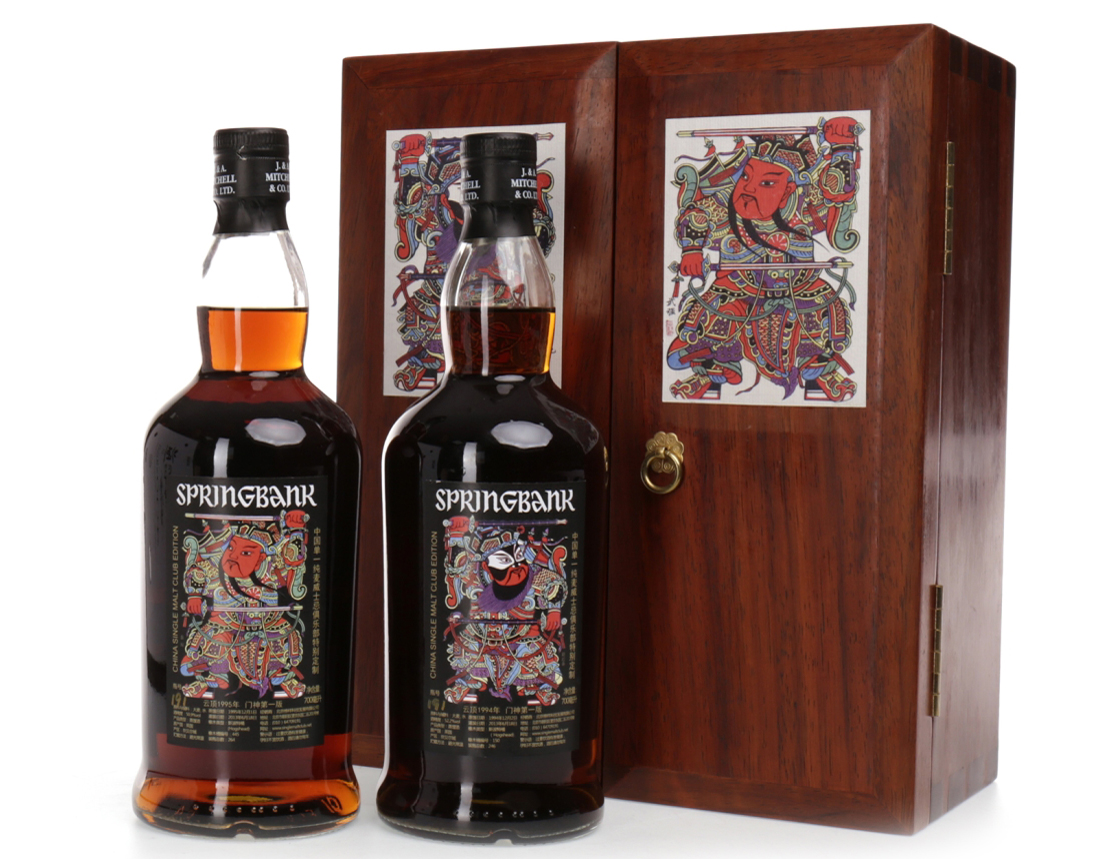 A large contributor to the whisky’s character on this occasion comes from the ex-port casks that were used for maturation. Shipped to Campbeltown from sunny Portugal, the two hogsheads had a capacity of approximately 250 litres each and had never been used to mature whisky before. Known as ‘first-fill’ casks, the port which has been absorbed by the porous oak can then be easily passed on to the spirit. After 17 years of maturation, the whisky has picked up a lovely deep colour from the wood and plenty of fruity, spicy flavours.

These two bottles form the first release of the ‘Door Gods’ series, selected by whisky expert Charles Maclean and released exclusively for Single Malt Club China (SMCC). Working with 31 Scottish distilleries and with over 5000 members, SMCC import tens of thousands of bottles every year for their members. Chinese households are often decorated with colourful, ornate paintings of gods which are through to bring good luck and happiness, and this lot contains a beautiful wooden cabinet decorated in this traditional style. Estimated at a tempting £2000-3000, which part of the world will this lot end up?

McTear’s are now accepting entries for the April whisky auction, click here for a free valuation >>