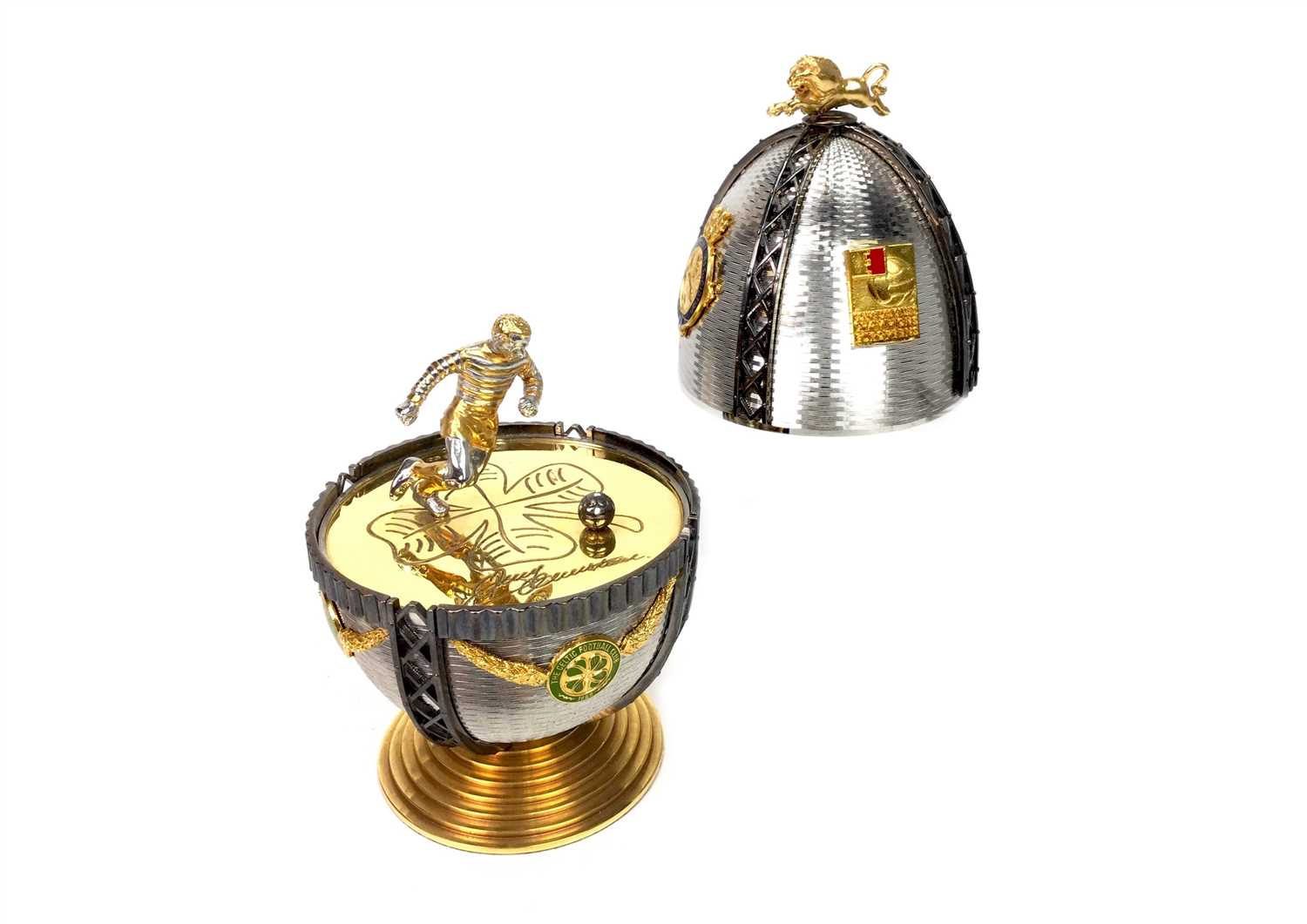 
- In fair condition overall, some signs of wear visible. Scratches present to the silver gilt ground below the figure of Jinky, some residue/discolouration to engraved signature and motif. Diamonds present inset to the football. Some very minor wear/discolouration to gilt interior of lid. Exterior of egg in good condition overall, some minor scratches. Some wear to lion finial on lid and some light wear to gilt badges.

THE JIMMY JOHNSTONE FABERGE EGG BY SARAH FABERGE,
number 14 of a limited edition of 19. The lion is presented as a finial in sterling silver and 24 carat gold-symbol of Celtic`s triumph in winning the European Cup in Lisbon in 1967. The lion presides over the badges of Celtic`s winners medals-the European Cup medal to the front; to the reverse the Scottish League Championship medal; and flanking them, to the left the Scottish Football Association Cup and to the right the Scottish Football League Cup Medals. Struck in the original dies, gilded and hand-enamelled, the sterling medals intersperse a reminder of Jimmy Johnstone`s origins with the coal pithead-four winding-shaft supports, fashioned in silver and black gold. The top of the Egg itself is hand engine-turned on sterling silver and precious rhodium. The lower half of the creation is adorned with Celtic Football Club`s badge proclaiming its 1888 origin and produced here with specific authority from the Club. The badge is counterbalanced by the motif from `The Lord of the Wing` motion picture, which celebrates Jimmy Johnstone`s career and achievement. To the sides, seven magic Celtic rings, also in hand-enamelled silver. The bezel is an echo of the `Jungle`, whose corrugated roof it commemorates. Open the Egg and view the surprise. On a field of gold and hallmarked silver, Jimmy Johnstone himself, poised aslant as he presses forward: Celtic`s legendary player, triumphantly modelled in silver and fine gold, at his feet a sterling silver and black gold diamond-studded football. Jimmy`s signature authenticates the creation. Sarah Faberge places her Jimmy Johnstone Egg on a foot with seven steps in final witness of Jinky`s number and of the `Jungle` terraces from which he would have happily stood watching his heroes had it not been for his own amazing God-given talents. Sarah adds her signature beneath, engraved and attesting the edition issue. Limited edition 19 for the World Market. This is number 14, 17.5cm high, contained in a leather display case, together with box and certificate of authenticity, signed by Sarah Faberge and dated March 2006