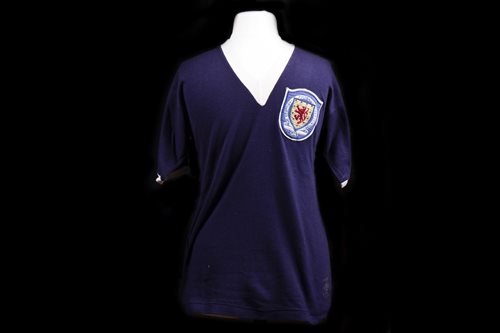 Note: Tommy Gemmell (1930 - 2004) was a Scottish footballer who played as an inside forward for St. Mirren F.C. for his entire senior football career. Although also capped for the Scotland national team - playing twice in May 1955 and scoring one goal for Scotland - Gemmell is best known as one of the Saints. Gemmell made over 250 league appearances for the club and aided their 1959 Scottish Cup campaign, where they reigned victorious in the final for just the second time in St Mirren's history. This Scottish International Jersey was worn by Tommy during his international games. In May 1955 he played for Scotland in a 2-2 draw against Ugoslavia and a 3-0 win against Portugal, scoring a goal in the latter match.