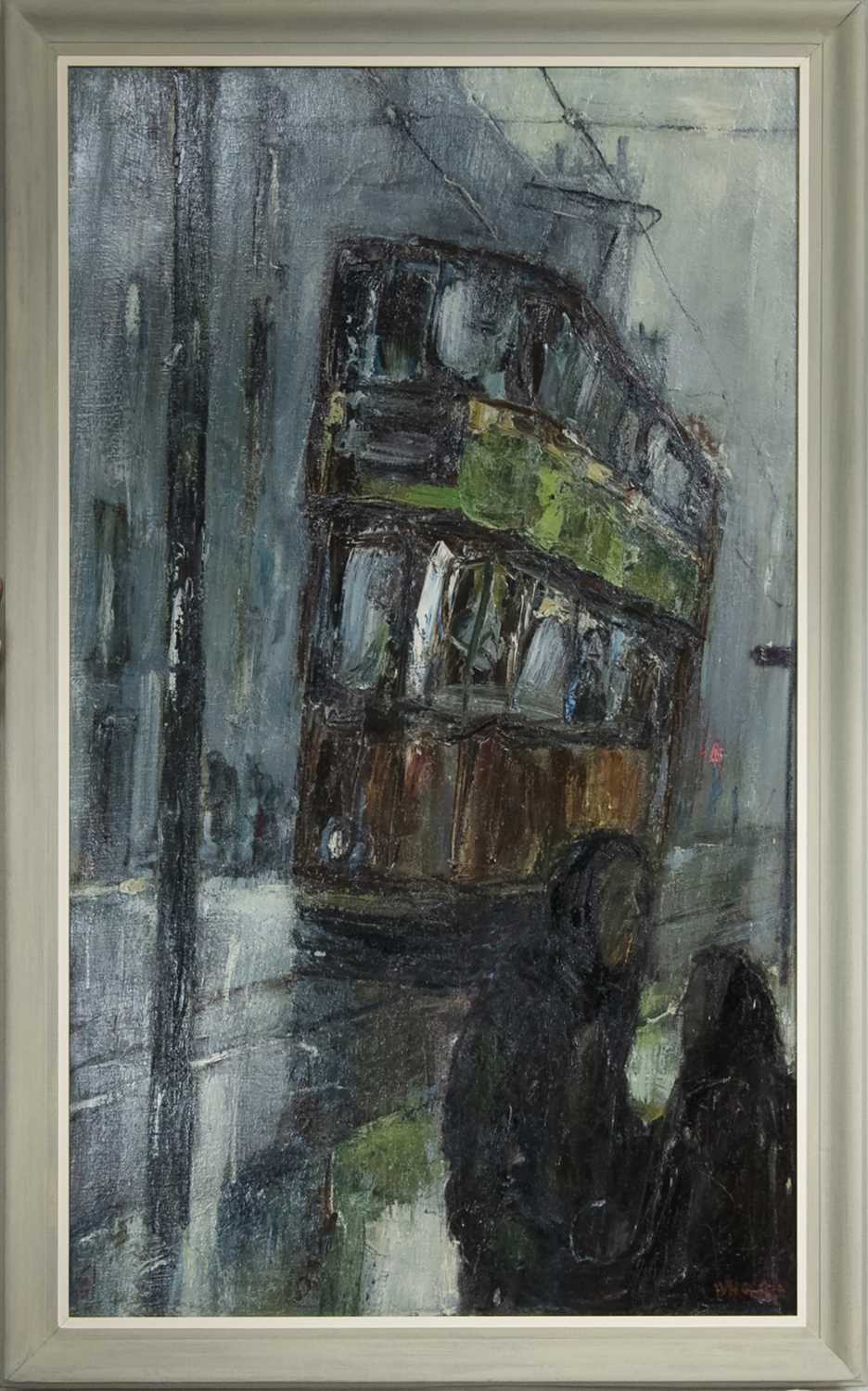 * HERBERT WHONE (BRITISH 1925 - 2011),
TRAM & FIGURES IN RAIN, BYRES ROAD
oil on canvas, signed and dated '61
image size 128cm x 77cm, overall size 140.5cm x 89cm
Framed.
Provenance: A private Glasgow collection.
Note: "Tram & Figures in Rain, Byres Road" is quite likely to be the holy grail for Herbert Whone collectors. It is similar in size to "Tramcar in Fog" which is owned by The National Galleries Scotland and held in the collection of The Scottish National Gallery of Modern Art. It is also almost exactly four times the size of "Glasgow Tram" (by Whone) which sold in The Scottish Contemporary Art Auction of 20th June 2021 (lot 520) for £13,000 (hammer). "Tram & Figures in Rain, Byres Road" is illustrated as a full-colour page in "Herbert Whone, Glasgow - In Transition" (a 112 page illustrated hardback book) which accompanies this lot. Herbert Whone was born in Bingley, West Yorkshire, where his parents were both employed in the cloth mills. He was encouraged by his mother to ''improve'' himself culturally, and from an early age took photographs and practised the violin. After education at the Royal Manchester College of Music (now the Royal Northern College of Music) and Manchester University, he secured positions in the Royal Opera House Orchestra and the BBC Symphony Orchestra, before moving to Glasgow in 1955, where he took up the position of deputy leader of the Scottish National Orchestra. He was inspired by Glasgow's changing fortunes and painted a series of notable canvases featuring the beauty of a city and surrounding areas in transition. His paintings of trams and shipbuilding on and around the Clyde, to pick two of his fondest subjects, were presented with warmth and beauty, almost impressionistic in their depiction of glowing sunsets and use of rich colour. Herbert Whone (often incorrectly catalogued as Herbert Bannister Whone, his father's name) continued to paint long after his departure from Glasgow in 1964 and made several trips back to Scotland to paint, but It's the relatively small body of work produced in and around the city that stands testament to his exceptional talent. Whone's paintings, while highly collected and critically acclaimed, are still to attain the full recognition and commercial value they deserve and will surely eventually achieve. Known collectors of Herbert Whone's paintings included Joan Eardley, Margot Sandeman, Cyril Gerber, Johnny Beattie and Magnus Magnusson. Growing collector interest in Herbert Whone has seen his auction record price being beaten on an almost annual basis in recent years. This is even more impressive as auction appearances of his Glasgow paintings are becoming ever rarer. Public collections include: Glasgow Museums & Galleries, The Scottish National Gallery of Modern Art, The Hepworth, Kirklees Museums & Galleries, Salford Museums & Galleries and The Mercer Gallery (Harrogate).