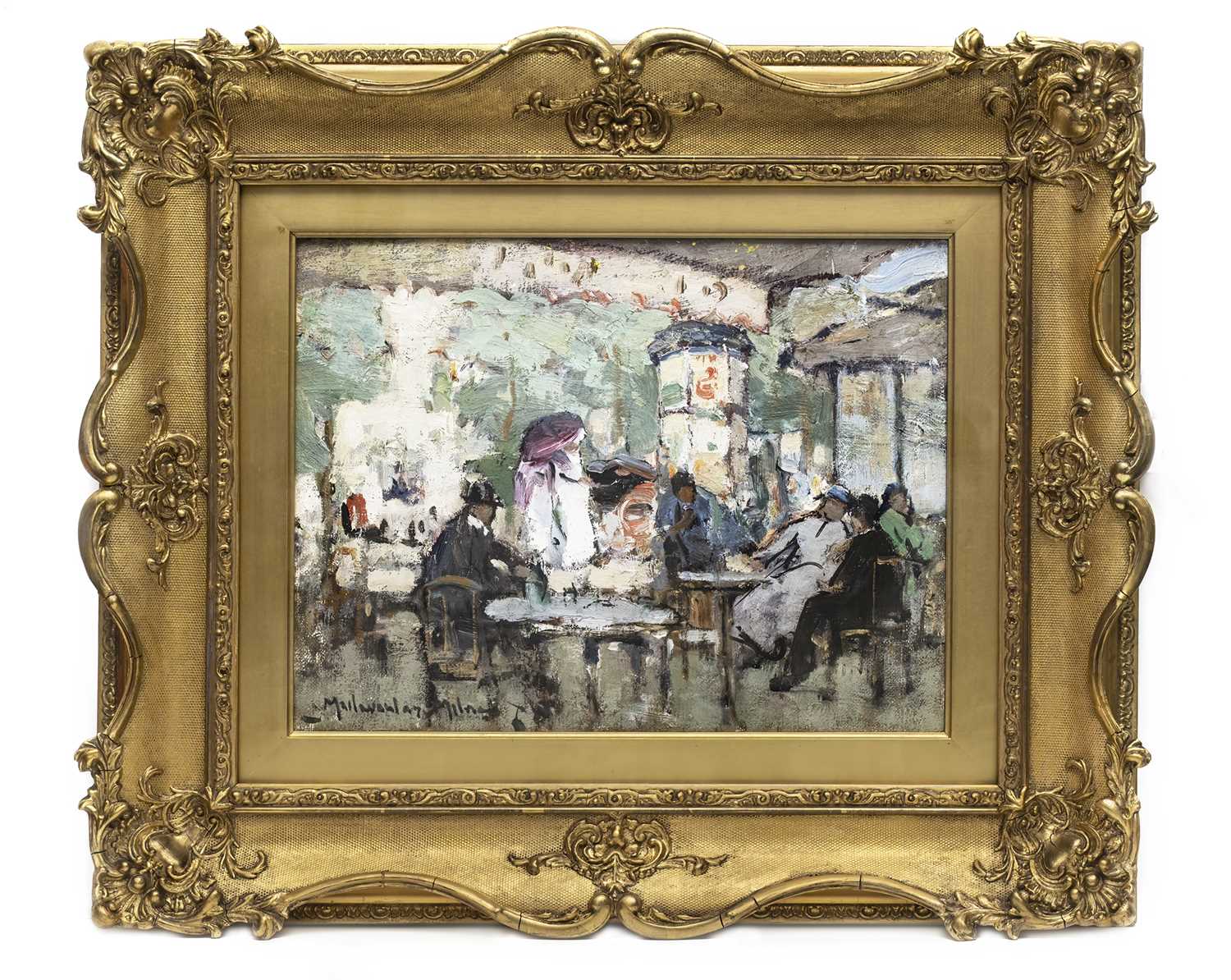 * JOHN MACLAUCHLAN MILNE RSA (SCOTTISH 1885 - 1957),
CAFE, PARIS
oil on board, signed
image size 25.5cm x 34cm, overall size 46.5cm x 54.5cm
Framed and under glass.
Label verso: Thomas Murray & Sons, Dundee.
Provenance: Private collection, Edinburgh.
Note: A rare Paris painting from between 1920 and 1922 when Milne lived in the French capital. Seeing Cezanne's work for the first time was a eureka moment for Milne who until then had painted much like his father in a sedate and traditional style. He discovered a completely new freedom and walked the streets and sights of Paris painting what he saw, en plein air and with rapid, bold brush strokes. Above all, he discovered ''colour''. This very distinct Paris period saw Milne producing some of his most spontaneous and desirable work and usually on smaller scale artist boards. By 1922/3 he had moved to the French village of Lavardin and by 1924 he was in Cassis with Peploe, Cadell and Duncan Grant. Milne is often referred to as ''the fifth Scottish Colourist'' and yet his quality is at least the equal of much of the output of the other four. As well as enjoying the company of the Scottish Colourists and exhibiting alongside them, Milne shared many of their patrons. William Boyd, the Managing Director of Keiller’s marmalade firm, became one of his most important patrons. In Boyd’s home at Claremont, several works by William McTaggart, Peploe, Hunter and Milne were displayed. His collection of French paintings included Monet, Sisley, Van Gogh, Matisse, Bonnard, Vuillard and de Segonzac. Alexander Keiller, head of the marmalade firm, was another important patron. He paid Milne a stipend – so that he could spend the summers in France – in return for paintings. The collector, Matthew Justice, was a close friend of George Leslie Hunter as well as being his agent during the 1920s. Justice owned around a dozen of Milne’s paintings; his sitting-room was hung exclusively with works by Peploe and Milne and his drawing-room contained eleven Peploes, three Marchands, one Hunter and five Milne’s. The Justice collection also included works by Vuillard, de Segonzac, Moreau and Matisse. Justice was friends with William Boyd and James Tattersall, another important patron of Milne. Even though Milne's paintings were widely exhibited in his lifetime at the very best venues to great success, it's probably because he never established a long term relationship with any one gallery or dealer that his paintings have been undervalued for many years. It took until 1987 before the first Milne painting reached the £20,000 mark at auction when ''Busy Paris Street Scene with Figures (1922)'' was sold by Christie's, Glasgow (lot 664, 28th April 1987 £20,000 hammer). The John Maclauchlan Milne Estate is now represented by Tom Hewlett's Portland Gallery (London) and unsurprisingly, his profile and values have been growing. A major exhibition ''Milne And The Colourist Connection'' was staged at Portland Gallery (London) 21st September -13th October 2017. On 30th August 2017 we sold "A Paris Scene (a 35cm x 26.5cm oil on panel) for £25,000 (hammer) and in The Scottish Pictures Auction of 24th September, 2021 lot 2005 (Green Pool, Iona) sold for £29,000 (hammer).