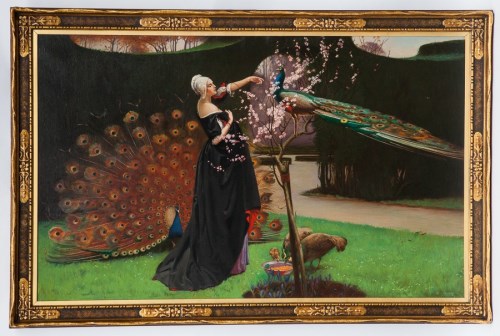 * JOHN YOUNG HUNTER RSA (SCOTTISH 1874 - 1955), VANITY FAIR oil on canvas, signed 86.3cm x 137.1cm (34 x 54 inches) Original frame Note: Painted in the grounds of Holland House, Kensington, London. The artist's wife Mary (1872-1947), also an artist, posed as the lady. A. L. Baldry described the school to which the artist and his wife belonged as 'the New Pre-Raphaelites' and said that it had grown up as a reaction against the realistic belief taught a quarter of a century before. ''Vanity Fair'' followed Hunter's 1899 painting ''My Lady's Garden'', which was exhibited at the Royal Academy Exhibition in 1899 and purchased through the Chantrey Bequest for The Tate Collection, where it remains. The location and setting used for both paintings is the same, as is the model. ''Vanity Fair'' was used in a hugely popular jigsaw puzzle in 1911 and details of this are readily available on the internet. Artist biography: Portrait, genre and landscape painter; began as a neo-Pre-Raphaelite, later turned mainly to portraiture. Born 29 October 1874 in Glasgow, son of Colin Hunter, R.A. Studied at the R.A. Schools and under Sargent, Alma-Tadema and Orchardson. Married Mary Towgood, painter and fellow-student, in 1899 and spent eight months with her in Italy, returning through Germany and Belgium. Exhibited at the R.A. from 1895; with his wife at the Fine Art Society in 1903 and at the Paris Salon (Medal 1914). Lived at Gifford's Hall, Suffolk. Settled in the USA. in 1913 and painted scenes of Indian life as well as portraits. Died at Taos, New Mexico, 9th August 1955