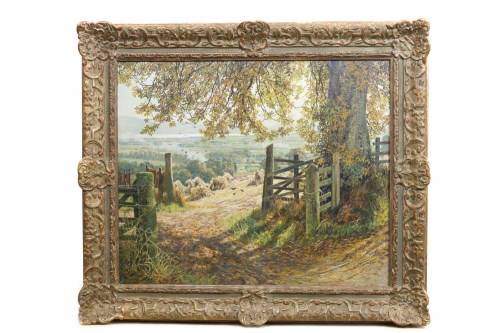 * JAMES MCINTOSH PATRICK LLD RSA ROI ARE (SCOTTISH 1907 -1998), THE HARVEST FIELD, GOWRIE oil on canvas, signed 51cm x 61cm (approx 20 x 24 inches) Framed. Label verso: The Fine Art Society, 148 New Bond Street, London. Inscribed with title, artist's name and dated April 1952. Note: An exceptional example of McIntosh Patrick's work from the early 50's when the artist is generally considered to have produced his finest paintings. After the war Patrick returned to Dundee with his wife and family and began painting outdoors rather than in the studio which he had upstairs in his house. By the 1950's he had perfected his style and technique in outdoor landscape painting and began recording his beloved Angus countryside on canvas, working in all seasons and all weather conditions. His style was traditional and he didn't have much time for ''contemporary'' interpretations of landscape. ''The Tay Bridge from My Studio Window'', painted in 1947, is probably the best known of Patrick's works and illustrates the detailed style which he had finally decided upon as suiting his temperament best. He was elected a full member of the Royal Scottish Academy in 1957. His reputation grew throughout the sixties and seventies and by the early eighties he was a giant in the Scottish art world. James McIntosh Patrick was an exemplar in his life and work and imparted his knowledge freely. He was without doubt the most able painter that Scotland has produced in the 20th century and stands on equal terms with most of Europe's best landscape painters of that era.