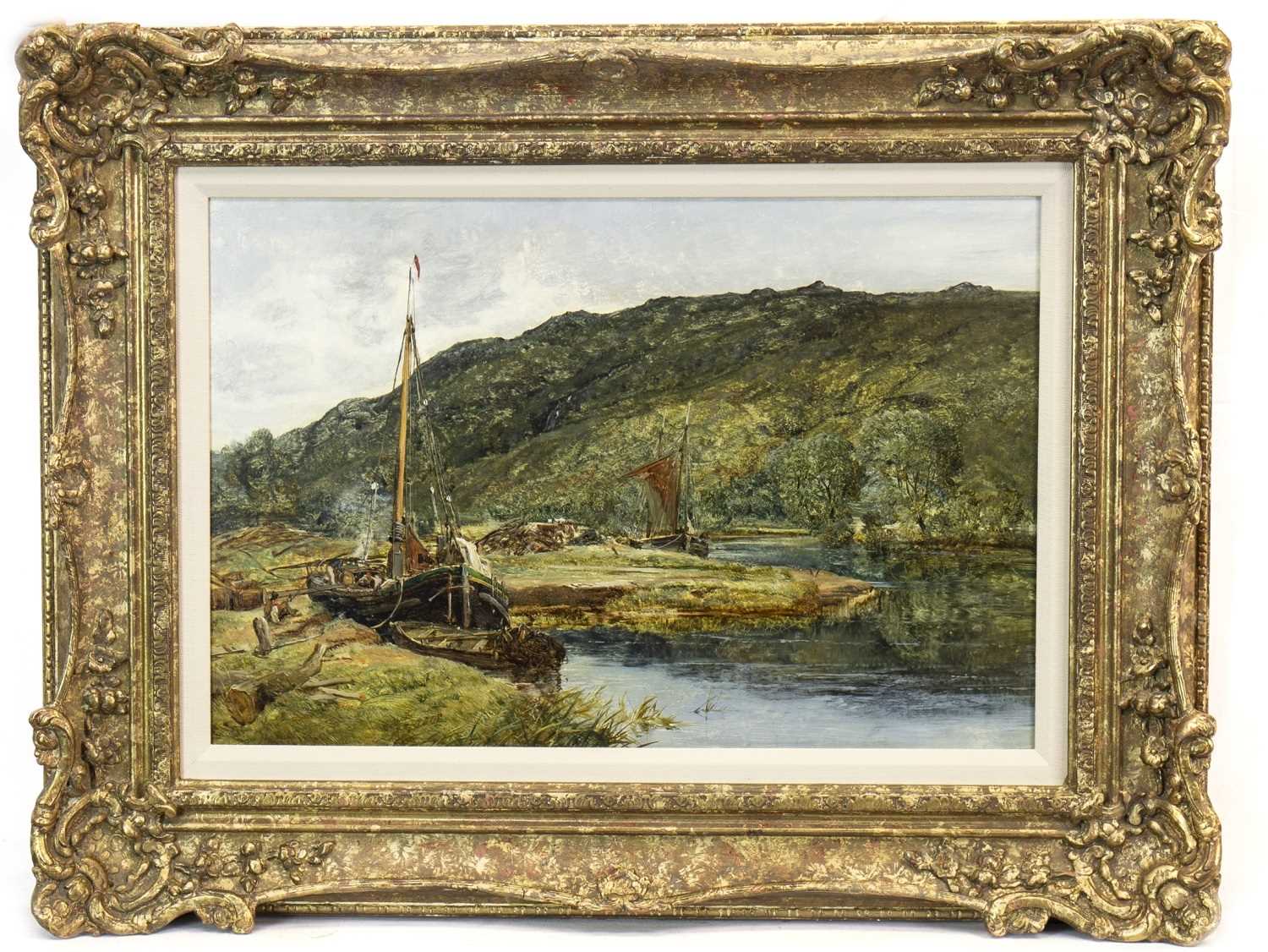 ON THE FALLOCH NEAR INVERARNAN, LOOKING NORTH, AN OIL BY ALEXANDER FRASER, THE YOUNGER

ALEXANDER FRASER, THE YOUNGER RSA (SCOTTISH 1827-1899),
ON THE FALLOCH NEAR INVERARNAN, LOOKING NORTH
oil on canvas, signed, inscribed verso, dated Sept 1860
30cm x 45cm
Framed.
Note: Inverarnan is located by the river Falloch at the south end of Glen Falloch, near the head of Loch Lomond. The village largely developed servicing the growing needs of steamboat activity and business in the 19th century. Today it is a popular place to stop while visiting the local beauty spots, such as the Falls of Falloch or walking The West Highland Way. There are also a number of heritage sites near the village including a double stone circle and an ancient boundary stone, Clach nam Breatann or ‘Stone of the Britons’. This stone marked the junction between the three ancient kingdoms: Pictland, to the east, Strathclyde, to the south and Dal Riata, to the north west.

Fraser’s childhood interest in painting was nurtured by his father Alexander George Fraser, an able amateur artist, who gave him elementary tuition. He enrolled at the Trustees’ Academy in Edinburgh, supplementing his studies by attendance at the life school of the Royal Scottish Academy (RSA). By the early 1850s he had abandoned Scottish genre and devoted himself exclusively to landscape. Fraser was among the first Scottish painters to work en plein air direct from nature. He was a good friend of Samuel Bough and Horatio McCulloch. After a time spent working in England, he returned to Edinburgh where he enjoyed most recognition as annual exhibitor at the RSA from 1847, and was a frequent exhibitor at the Royal Glasgow Institute of the Fine Arts from 1861 until his death in 1899. Sixty-five of Fraser's paintings are held in UK public collections including: Glasgow Museums, The National Galleries of Scotland, The Hunterian, Dundee Museums, Paisley Art Institute, Sheffield Museums, Kirkcaldy Museums, The RSA, Hospitalfield, Rozelle House, Perth & Kinross and The City Art Centre (Edinburgh).