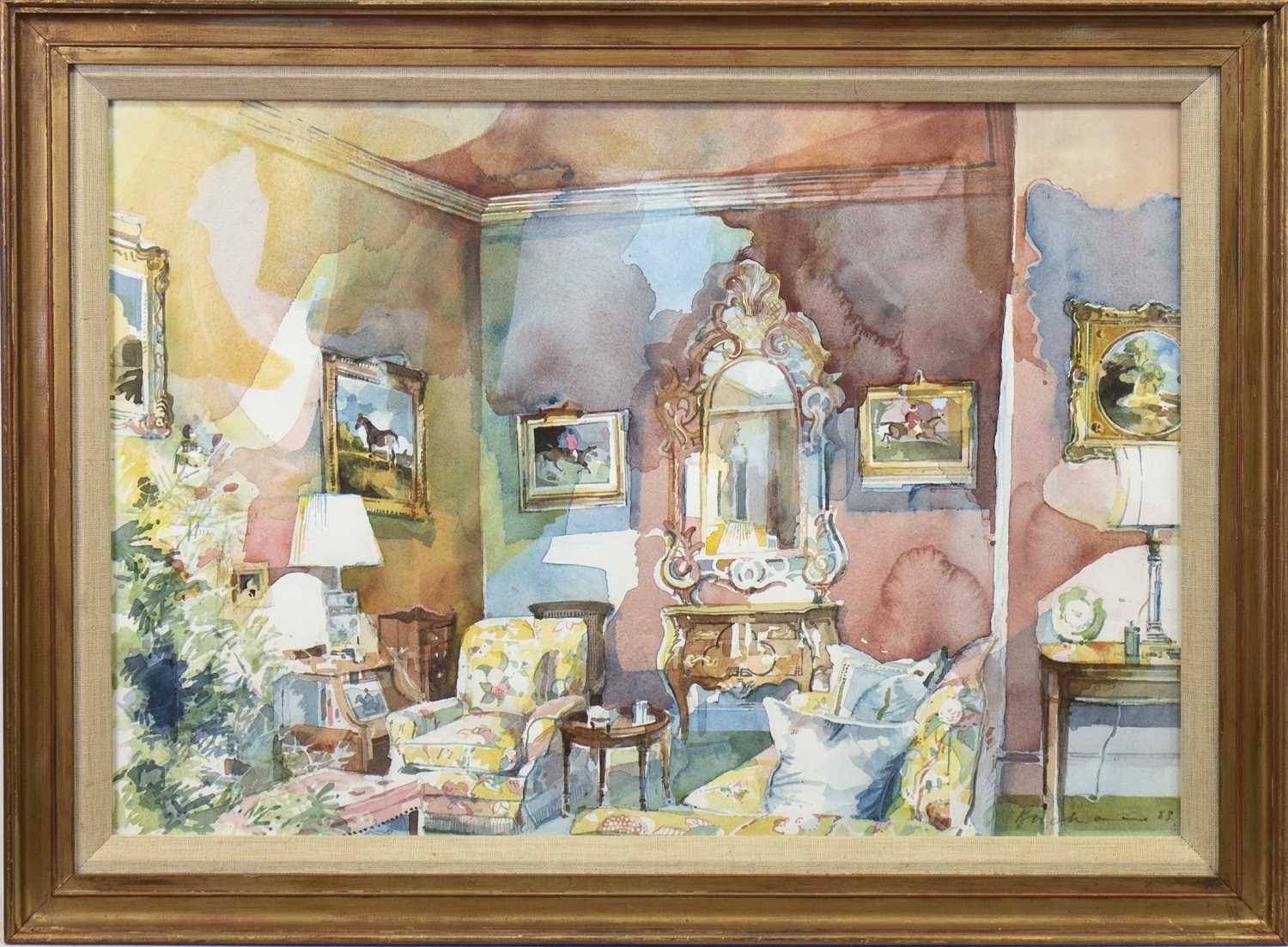 * HUGH BUCHANAN (SCOTTISH b 1958 - )
UNIDENTIFIED INTERIOR I
watercolour on paper, signed and dated '83
39cm x 57cm
Framed and under glass.
Note: Hugh Buchanan is a distinguished Scottish watercolour artist. After graduating from ECA in 1981 he worked on watercolour commissions for the National Trust and in 1987 was invited by the Prince of Wales to paint a series of interiors of Balmoral, subsequently completing a further sequence at Highgrove in 1994. In 1988 he was commissioned by the House of Commons to paint four interiors of the Palace of Westminster. Hugh Buchanan's watercolour paintings are in the collections of HM The Queen, HRH Queen Elizabeth the late Queen Mother, HRH Prince Charles, the Palace of Westminster, the Victoria and Albert Museum, Edinburgh City Art Centre, the University of Edinburgh, the University of Aberdeen, the Bank of Scotland, the Royal Bank of Scotland, Flemings Bank, Deutsche Bank, the National Trust for Scotland and the English National Trust. In 2002 he was commissioned by the House of Lords to paint the lying in state of the Queen Mother at the Palace of Westminster. In 1987 he was one of the Ten British Watercolourists shown at the Museo de Bellas Artes in Bilbao, Spain. In 1991 he exhibited at the Lincoln Centre, New York. In 1998 five works by Hugh Buchanan were included in the exhibition Princes as Patrons: The Art Collections of the Princes of Wales from the Renaissance to the Present Day shown at the National Museum and Gallery, Cardiff. In 2005 his paintings featured in Watercolours and Drawings from the Collection of Queen Elizabeth the Queen Mother, at the Palace of Holyroodhouse, Edinburgh and Queen's Gallery, London. Hugh Buchanan's numerous solo exhibitions include multiple shows at Francis Kyle Gallery (Mayfair) and other London venues and at The Scottish Gallery and Open Eye Gallery (Edinburgh). His forthcoming solo exhibition is at The Scottish Gallery in December (2019).