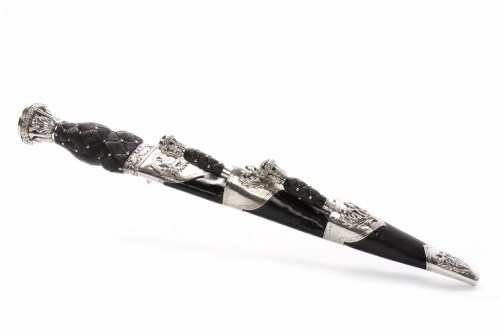 SCOTTISH SILVER MOUNTED DIRK BELONGING TO LIEUTENANT COLONEL KENNETH GIBBON O'MORCHOE (1894 - 1962) the single edge fullered blade with a notched back with a thistle embossed collar and a studded carved basket weave handle with a stone set pommel, together with a similar knife and fork all contained in a leather scabbard with thistle embossed and engraved silver mounts and a Gordon Highlanders badge, Glasgow 1924, engraved K.G.O.M., 46cm long Note: Educated at St. Andrew's College in Dublin, O'Morchoe joined the Gordon Highlanders in 1922. He had an illustrious military career, as part of The Prince of Wales's Leinster Regiment (Royal Canadians) 5th Battalion, 2nd Lieutentant 1913, Lieutenant 1915 and Captain 1915; the Royal Dublin Fusiliers, 2nd Lieutenant 1915 and Lieutenant 1916. He fought in WWI in France and Belgium 1915 - 1916 and he was wounded twice. He was awarded campaign medals, to include 1914/15 Star, British War Medal and the Victory Medal. He was also employed with the West African Frontier Force (The West African Frontier Force (WAFF) was a multi-battalion field force, formed by the British Colonial Office in 1900 to garrison the West African colonies of Nigeria, Gold Coast, Sierra Leone and Gambia) from 1917 to 1929. He joined the Gordon Highlanders in 1922 as a Lieutenant, made a Captain in 1923, Major 1934 - 1938, Adjutant 1929 - 1932, Brevet Major 1937, Major 1938 and Lietenant Colonel in 1940. He served in the King's African Rifles in 1922-24 and then again in 1934 - 38. He retired from the military in 1947.