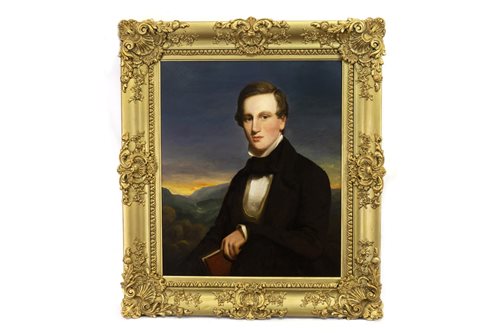 Condition report
The painting has been professionally restored to a very high standard and as one would expect, the canvas has been lined. The condition overall is very good and the painting is ready to hang without any further cleaning or restoration.

JOHN WATSON GORDON (SCOTTISH 1788 - 1864),
PORTRAIT OF JOHN LOGAN CAMPBELL
oil on canvas, signed and dated 1837
77cm x 64cm
Framed
Labels verso: Doig, Wilson & Wheatley, 90 George Street, Edinburgh; together with handwritten labels with title and date. Note: John Logan Campbell was born at Edinburgh on 3 November 1817. His father was Dr John Campbell (1784–1867), son of Sir James Campbell, of Aberu-chill and Kilbryde, and his mother was Catherine née Logan (1788–1865). It seems that it was because of parental pressure rather than of a love for medicine that John Logan went to Edinburgh University, where he graduated M.D. and F.R.C.S. Determined to see something of the world, he sought a commission as medical officer in the East India Company; but as opportunities for settlement were offering in Australia, he decided to emigrate there, and sailed in the Palmyra as ship's doctor on 3 July 1839, arriving in Australia later that year.

After spending some time in the Bathurst and Lachlan districts, Campbell decided against settling in Australia, and sailed for New Zealand in the Lady Lilford, arriving at Coromandel on 13 April 1840. Here he was met by William Webster, an American trader, and by William Brown whom he had first met on the Palmyra. Hearing of the Government's decision to establish the capital at the Waitemata, Campbell and Brown conceived the plan of buying up land, forming a township, and selling it off. Accordingly they visited the Waitemata, but the natives refused to sell them any suitable land. Brown, however, purchased the island of Motukorea (now Browns Island), where on 13 August 1840 he and Campbell took up residence, remaining there until after the founding of the capital. Quick to see possibilities in the new capital, they decided to set up as merchants and commission agents; on 21 December 1840, therefore, they “came to town”, pitched their tent near the beach at Commercial Bay (the foot of the present Shortland Street) and began business. In due course they built business premises in Shortland Crescent, and in O'Connell Street built the “Acacia Cottage” which now stands in Cornwall Park.

In 1843 they erected a brick building next to their business premises, and this they let to Gibson and Mitchell who were in partnership with them, though the businesses were carried on under different names. This partnership enabled Brown and Campbell to obtain the necessary capital to develop the business. Campbell soon realised the country's need for exports, and saw the implication for their own business. He therefore set about obtaining goods suitable for export, and in 1844 the firm purchased the barque Bolina. On 20 December 1844 the flag was hoisted on Point Britomart to mark the departure of Auckland's first cargo to be sent by direct ship to England – kauri spars, manganese, and copper ore. Brown sailed with the ship, returning to Auckland in 1847. By this time the firm was well established and flourishing, the business side being left mainly to Campbell and Mitchell, for Gibson was in Scotland, while Brown, on his return, became immersed in politics. In June 1848 Campbell left for Scotland, returning in 1850. Hoping to profit from the California gold rush, he immediately set out for San Francisco with a cargo of potatoes, onions, etc., returning with a huge profit.

Although deeply interested in political and other public matters, Campbell, during these first 10 years, did not take such an active part in public affairs, as he did later, preferring to devote his energies to the business. He was, however, president of the Mechanics' Institute in 1846, was one of the group who founded the Auckland Savings Bank in 1846, became the local director of the new Auckland branch of the Union Bank of Australia in 1847, and was associated with Brown in the Southern Cross newspaper founded in 1843; but he refused FitzRoy's offer of a seat in the Legislative Council, having no taste, either then or later, for a political life.

After his return from overseas, Campbell moved to “Logan Bank”, the house he had built in Jermyn Street in 1842. In May 1855 the partnership with Gibson and Mitchell ceased. Brown at this time was Superintendent of the province but, when family reasons compelled him to leave New Zealand, he resigned. Campbell was asked to stand against Whitaker, which he did very reluctantly. He defeated Whitaker, but was Superintendent for only 10 months until September 1856, when he resigned to go to Europe. On 25 February 1858, he married Emma, daughter of Cracroft Wilson, at Meerut, India, returning with her to join his parents in Naples, where on 22 December 1858 their first child, Ida, was born. In 1859 he returned to Auckland and in 1860 was elected unopposed for Auckland Suburbs, but resigned before his departure for Europe in 1861. The next 10 years were spent in Europe, mainly in Italy. On 15 May 1861 a child, Cicily, was born, but died on 20 November 1861. On 26 May 1864, twins were born, John Logan (who died on 5 February 1867) and Winifred. In December 1870 the family left for New Zealand, and the rest of Campbell's life was closely bound up with the city of Auckland. In 1876 Campbell's wife and daughters went to England for his daughters' education, but in 1880, Ida, his elder daughter, died. The Campbells from then on lived in Auckland at “Kilbryde”, the house he had built on Campbell Point.

In 1897 the firm, which had some time earlier entered the brewing business, became amalgamated with Ehrenfried Brothers, prominent brewers. Brown had relinquished his interest in the firm in 1874, and the name now became Campbell and Ehrenfried. It is impossible to list the many business and other concerns with which Campbell was associated as chairman, director, trustee, president, or secretary, but in the years following his return to Auckland in 1871, he became one of the most prominent figures in the commercial life of the city. In addition, he was deeply interested in educational and cultural matters. He was, for instance, responsible for the establishment of a School of Design, which he maintained for 11 years until the founding of the Elam School of Art.

His gifts to the city are too numerous to list here, but he gave generously to such institutions as children's homes and St. John Ambulance – in fact, any organisation which was of benefit to the citizens of Auckland had his practical sympathy. His greatest gift, however, was that of the magnificent Cornwall Park. Originally purchased in 1845 by Thomas Henry, it was bought by Brown and Campbell in 1853. In 1901, when the Duke and Duchess of Cornwall and York visited New Zealand, Campbell was made Mayor to receive them and to present the citizens' address of welcome. He had intended to bequeath the park to the city, but it seemed to him a fitting opportunity to present it to “the people of New Zealand” through the hands of their Royal Highnesses. Campbell's own name for it had been Corinth Park, but in honour of the royal visitors, he changed it to Cornwall Park. Campbell was knighted in 1902 and died at “Kilbryde” on 22 June 1912 in his ninety-fifth year.

From being the very junior partner of a firm which eked out a precarious living on the shores of the infant capital, John Logan Campbell became one of Auckland's best known and respected citizens. Although always known as “Dr Campbell”, he concerned himself little with medicine, a profession which held no attractions for him and which, as a calling, he considered much inferior to “business”. Thus, after a particularly profitable deal, he wrote in this vein to his father: “What a botheration lot of pulses one would require to feel – tongues to look at and prescriptions to write before the fees would come up to the above sum, and as for a poor devil of a dentist, he would require to slay at least 310 teeth …”. Although neither he nor Brown had had any business training, the firm was soon established on a sound footing, due in great measure to Campbell's keen and farseeing mind. Money was to him, however, only a means to an end, and when circumstances allowed, he set about satisfying his life-long desire for travel, making several trips overseas, and spending 10 years in what he called a “holiday” in Europe. He did not believe in bequeathing large sums of money to descendants, and thought money should be used and not hoarded. When he finally settled in Auckland, he devoted himself to his business and to the city, and became one of Auckland's greatest benefactors, and its most prominent figure.

A statue was erected to him in his lifetime; the obelisk on One Tree Hill was built at his request, and his grave is beside it; but we do not need these reminders to keep his memory green. Institutions he founded still exist; cultural, educational, and charitable organisations still benefit from the generosity of John Logan Campbell, the man who has been called the “Father of Auckland”.