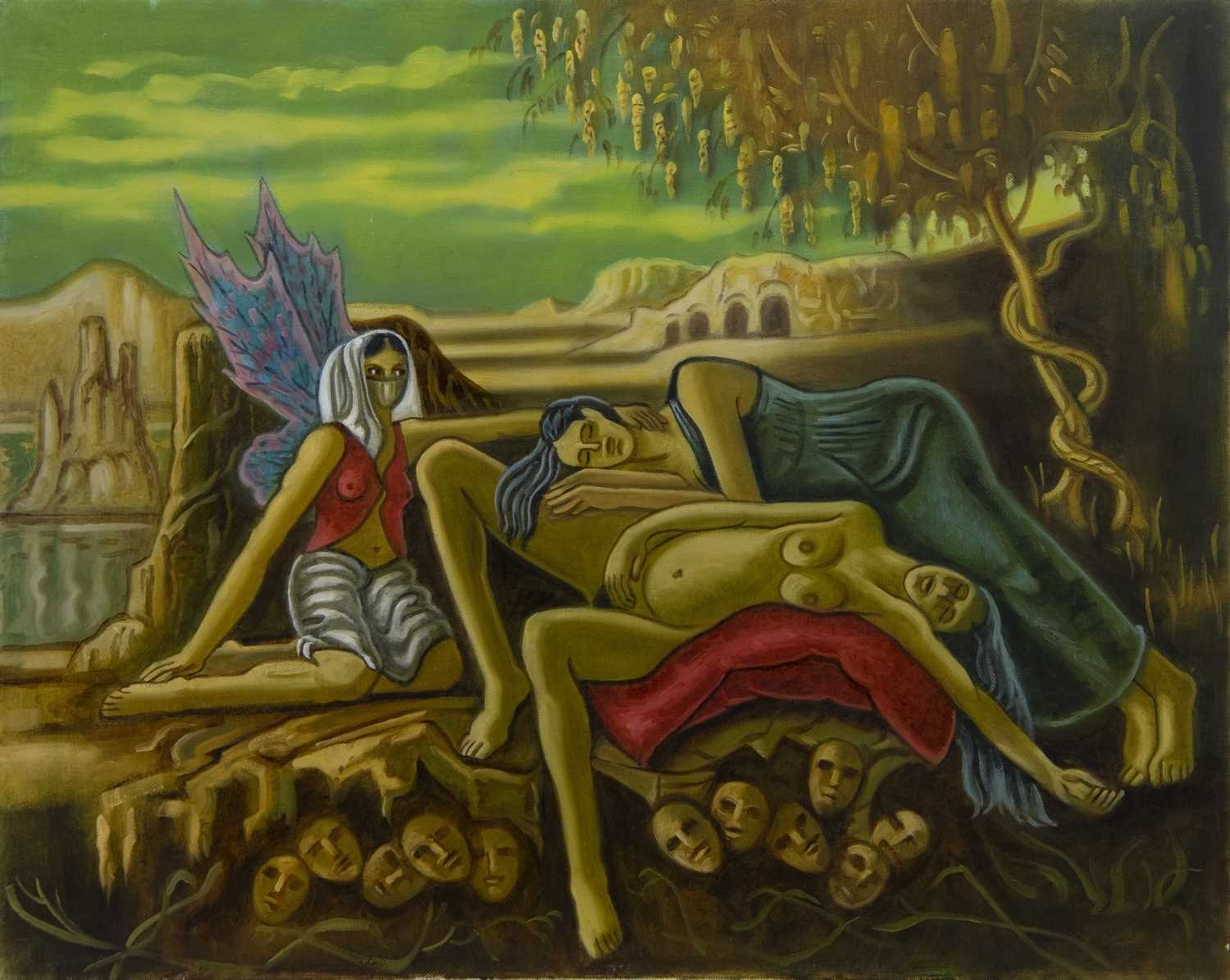 GUARDIAN OF THE SHADES OF MEMORY, AN OIL BY RICHARD TURNER

* RICHARD "TURNERAMON" TURNER ARCA (BRITISH 1930 - 2013),
GUARDIAN OF THE SHADES OF MEMORY
oil on canvas, signed, titled and dated 2011 verso
60cm x 76cm
Unframed
Note: Richard Turner was noted post modernist artist born in Derby England and was educated at Bemrose Grammar School. In 1960, he enrolled at the Derby College of Art where he won the J. Andrew Lloyd scholarship for Landscape, enabling him to study at the Royal College of Art in London, from 1963. There, he was tutored by Carol Weight and Sir Peter Blake. He graduated in 1966 with an Associate of the Royal College of Art Degree, as well as prizes in Life Drawing, Life Painting, and Landscape Painting. His work was much admired by his contemporaries and his tutors. For the next two years, Turner was a lecturer at the Guildford School of Art; working on environmental installation projects with Australian artist Tony Underhill. He was introduced to etching by Peter Olley and Norman Ackroyd. In 1968, he was employed as an epigraphic artist and photographer by the Oriental Institute of the University of Chicago. For five years, he was based at Chicago House in Luxor, Egypt making facsimile drawings of the reliefs on the walls of the Temple of Khonsu, Karnak and Medenet Habu, adjacent to the Valley of the Queens. In 1973, Turner returned to England, lecturing at Salisbury College of Art for three years, before being re-employed in Egypt by the University of Chicago, for a further four years. During this time he made full scale tracings of all columns in the Great Hypostyle Hall of Luxor Temple. In 1980 he moved to the USA; built a split-level chalet style house in Big Bear, California, and ran his own gallery, named Minnelusa Gallery, on the shores of Big Bear Lake. He also worked as a graphic designer with Treasure Chest Advertising, based in Los Angeles. Four years later, Turner returned to the United Kingdom, and briefly lived in Edinburgh before moving south for five years. He returned to Scotland in 1989, and ran a successful "art holiday" home business from Park House in Kirkcudbright, as well as lecturing part-time in various colleges and schools. In 1993, Turner met HM The Queen and Prince Philip, at the opening of Tolbooth Art Centre in Kirkcudbright. Prince Philip commented on Turner's work saying it looked "refreshingly different". Turner exhibited widely throughout his career including multiple solo shows in London, Manchester, San Francisco, Palm Springs, San Bernardino, Los Angeles, Paris, Cairo, Luxor, Kirkcudbright and around the UK.