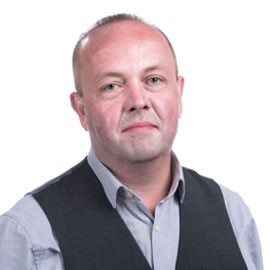 McTear’s managing director, Brian, joined the company in 1987 after two years apprenticeship in a small auction concern in his home town Greenock. Working through the roles of auction clerk, assistant, junior valuer, auctioneer and saleroom manager, he became a Director in 2003 and soon after Managing Director. Brian is married and has three children, Kerr, Briony and Connor.

As a lifelong supporter of Scottish Championship football team Greenock Morton, Brian was honoured to accept an invitation to the join the club's board in July 2016, involved primarily in the commercial and hospitality side of the business.

His involvement in McTear's and the football club doesn't leave a lot of spare time, though when there is, he'll usually take advantage of any glimpse of sunshine over Mar Hall or Gourock Golf Course!