A Scottish Cup medal won by legendary Celtic centre-half, Willie Cringan, almost 100 years ago has sold for £2500 at McTear's.

The historical piece was presented to the player following Celtic’s 1–0 victory over Hibernian in the final at Hampden Park on 31 March 1923.

There was considerable interest in the fifteen-carat gold medal prior to the McTear’s auction, with the lot eventually selling to a Glasgow bidder in the saleroom. 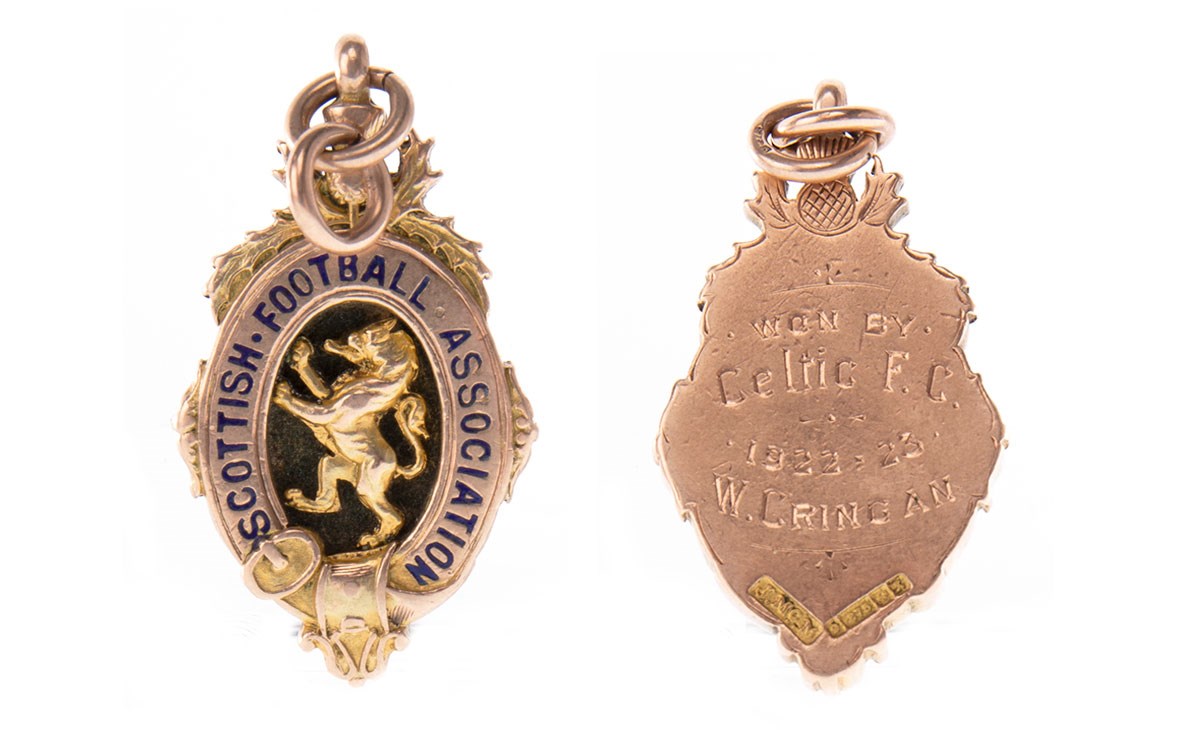 Over the years the medal passed through the Cringan family eventually coming to the player’s grandson, also named William Cringan.

William said: “My grandfather was a great footballer and a great man too.   I was only five when he passed away but I do remember sitting on his knee and listening to his stories.  In later years my dad told me that after my grandfather retired he would hold court in his pub in Bathgate telling story after story to his customers.  He was the kindest person you could meet and over a period of time he gave away lots of his memorabilia to Celtic fans he met.

“I have had the medal for many years and have thought often about what should happen to it. In truth I have never been a big football fan and I knew there were lots of true Celtic supporters out there who would get a huge amount from this important piece of sporting history and who would treasure the medal.”

Willie Cringan (1890 – 1958) was a Scottish international footballer who played for Sunderland, Ayr United, Celtic, Third Lanark and Motherwell. The player's senior debut for Celtic came in a 2-0 victory over Rangers on the 12 May 1917. He would later go on to captain the team until his departure in 1923.

Commenting on the auction, James Bruce from McTear’s said: “It was a very busy auction with both serious collectors and sports fans interested in the medal. There was a real buzz in the saleroom when the bidding started, with the lot eventually selling to a buyer from Glasgow.

“Over the past few months we have seen a number of Old Firm medals from the early part of the 20th century go under the hammer, and this latest sale has underlined the huge interest there is in this type of football memorabilia.”

The fifteen-carat gold Scottish Cup winner’s medal, along with photographs of Willie Cringan featured in McTear’s Works of Art Auction on Friday 23 November.

Prices quoted above include buyer’s commission and VAT thereon.

To view the sale results in full, please click here >>