The rulers of Ancient Egypt are often portrayed regally, in splendour and adorned with jewels. Certainly, jewellery was important to people in Ancient Egypt, and beyond its aesthetic value, was valued for the supernatural qualities which it beheld, worn for the protective and healing powers it offered, or to encourage good fortune for the wearer. 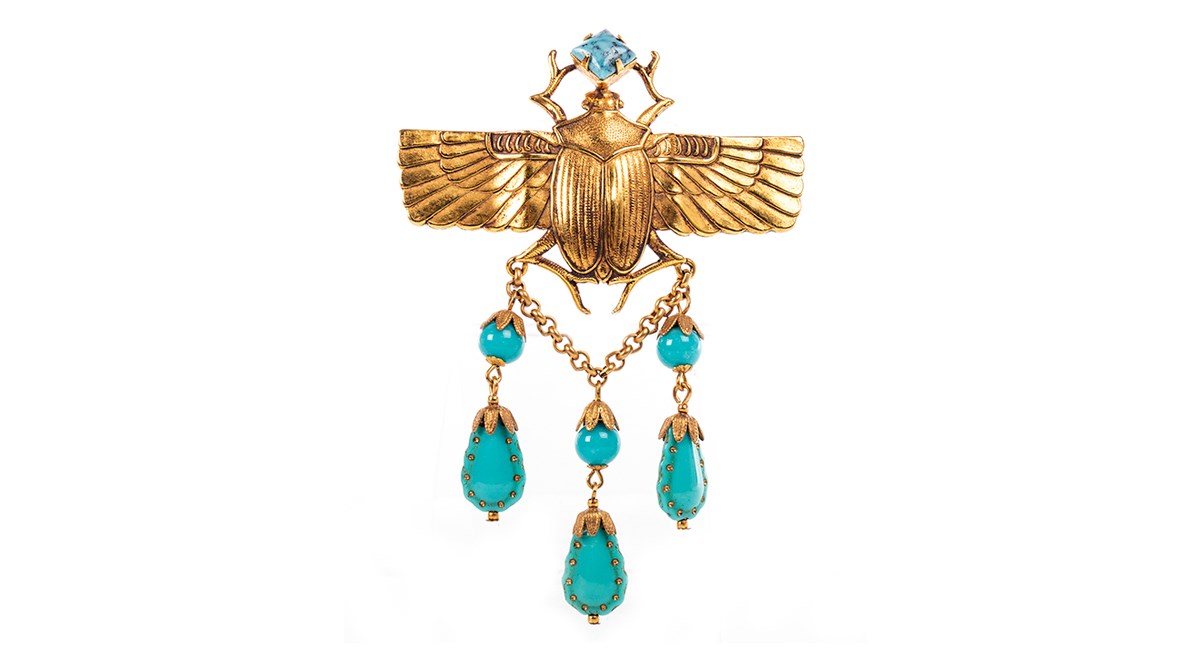 One of the most prominent symbols in Egyptian jewellery, the image of the scarab is believed to have first appeared as early as circa 2575–2130 BC, and has since become one of the most popular motifs in Egyptian art. Beyond the artistic appeal of the scarab, the Ancient Egyptians recognised an important correlation between scarabs and the movement of the sun. Accordingly, the scarab is associated with the Ancient Egyptian God Khepri or Kheper, who was believed to represent the rising sun, and accordingly, creation and renewal. In fact, Khepri predominantly appears as a scarab beetle in hieroglyphs. Scarabs themselves were thus believed to denote growth or development, therefore becoming a common motif to decorate and defend the living, and as funerary amulets to adorn the chest of the deceased, believed to guarantee reincarnation.

A charming example of a scarab, lot 1801 is an Askew of London pressed gilt-metal brooch in the form of a winged scarab, with delicate drop detailing. This comes with an auction estimate of £100–200. This beautiful brooch is just one of the Egyptian-inspired jewels in the Egyptian Revival Auction on 12 October at McTear’s.

Click to view jewellery and more in the full auction catalogue >>