A Victorian Heroine – Mary Queen of Scots in Captivity

The nineteenth century saw the enigma of Mary, Queen of Scots explored through story, song and image with many contrasting representations. From an ambitious and scheming absolutist, a murderous adulterer to a tragic, beautiful victim, the myth of Mary was irresistible to artists, and next month we’re delighted to offer for sale John Callcott Horsley’s (1817 – 1903) outstanding Mary Queen of Scots in Captivity (lot 250). 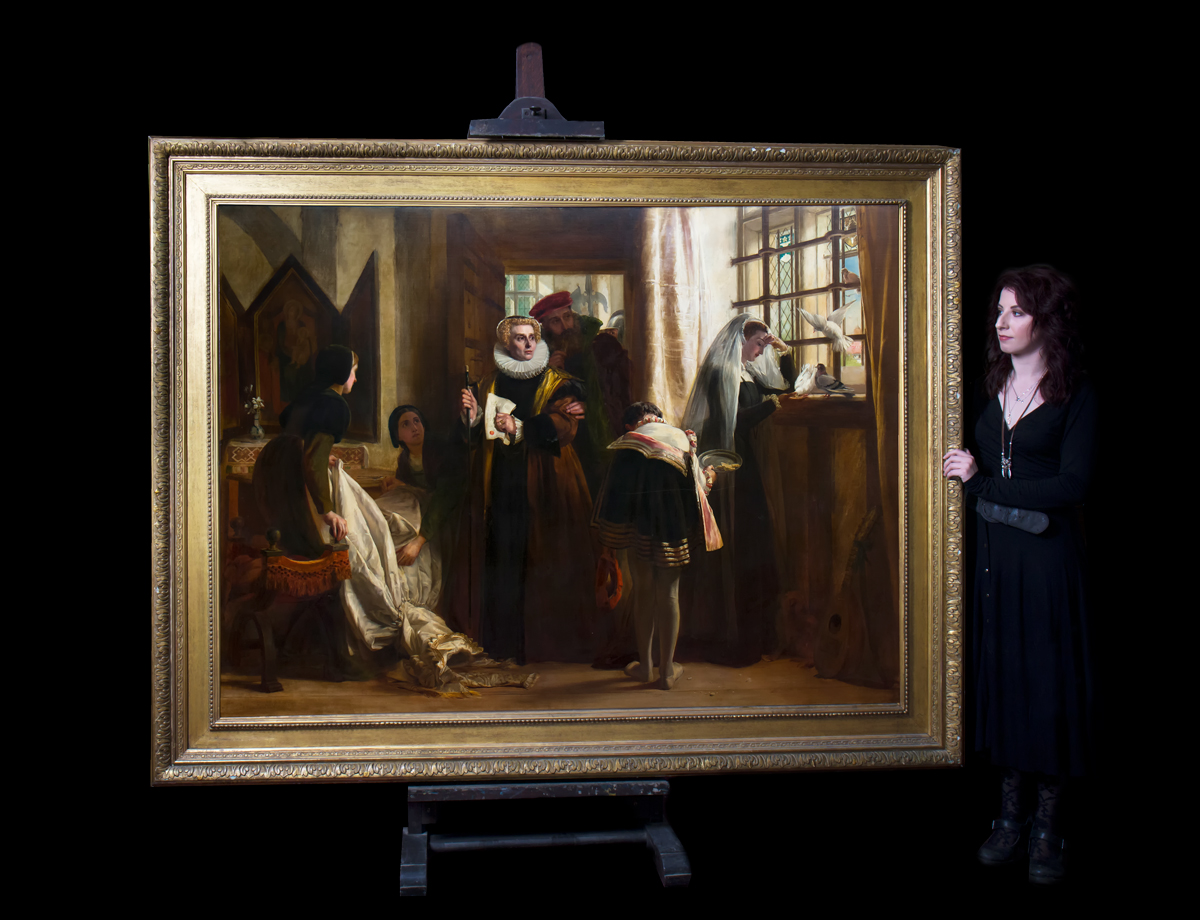 The year is 1587, and by this point Mary had been in captivity in Sheffield Castle for nineteen years at the hands of her cousin, Queen Elizabeth I. A vulnerable looking Mary feeds the doves by the window, tormented by their freedom, as Bess of Hardwick clutches the death warrant reluctantly issued by Elizabeth. Horsley’s portrayal is a sympathetic one; rather than Mary, it is her spectators who dominate the scene, implying her lack of control in the situation and cementing her role as a pawn in a cruel and heart-breaking plot to remove her from the throne.

As a painter of grand historical and genre scenes, this was not an unusual subject for Horsley. His work was championed by collectors and in 1856 he was commissioned to design the very first Christmas card by Henry Cole, who went on to become Director of the Victoria and Albert Museum. The clarity in Horsley’s artistry appealed to the sentiment of the Victorian public and the over the last ten years his prices have increased at auction. In 2004, Sotheby’s offered the beautifully painted The Morning of St Valentine which sold for £48,000 (including premium). Four years later Sotheby’s sold Showing a Preference, an allegorical Victorian genre painting for a hammer of £313,250 (including premium).

Horsley’s magnificent portrayal is littered with tragic and religious symbolism and succeeds in painting one of the most controversial figures in Scottish history as the perfect tragic heroine for the Victorian imagination.

Mary Queen of Scots in Captivity is to be offered on Wednesday 14 March with an auction estimate of £35,000 – 55,000. We are currently inviting entries for our Scottish Pictures auction until Wednesday 28 February. If you have high-quality Scottish paintings you are thinking of selling please contact pictures@mctears.co.uk

The Scottish Pictures auctions feature paintings by Scottish artists or pictures of Scottish subject matter, including examples of the work of "The Glasgow Boys". In recent years, McTear's has generated record figures for many of Scotland's most distinguished names.