By order of the Ministry of Defence of the USSR

The year is 1939; the German Army have just invaded Poland signalling the commencement of World War II.

As well as defence weapons, fighter jets and tanks, watches have played a huge part in military history. Watches created specifically for military use and engineered to tight guidelines gave military personnel the gift of precise timekeeping when in battle.

In the early twentieth century, pre WWII, the Russian’s had very few watch technicians and little equipment so when a watchmaking company in Ohio went up for sale, the Soviet Government purchased their patents, materials, remaining equipment and ordered twenty one employees to travel to Russia to oversee the installation of the equipment and to provide training to Russian watch technicians. Once established, they created pocket watches, known as Type-1, for civilians and army personnel alike. The Soviet Union took great pride in these watches as they were the first watches to be made by Russian hands on Russian soil. Watches from this factory were used mainly by Soviet Aviation personnel. The factory was later renamed to honour the Soviet Official Sergei Kirov and adopted the name, ‘First Moscow Watch Factory Kirov’.

A clockmaking factory was also based in Moscow during this time and when the Russian pocket watch was in production, due to its high demand, the decision was made to supply the clockmaking factory with the equipment to produce these Type-1 pocket watch movements. In 1930, this became ‘The Second Moscow Watch Factory’. When the German Army invaded Russia in 1941, the factories turned to making munitions materials such as bomb fuses and timers to aid the war efforts and soon, the factory was evacuated to a small town located around 500 miles East of Moscow called Chistopol where over 170 trucks transported their equipment to prevent it from falling into enemy hands and set up production in an abandoned distillery. Evidence also suggests that they kept up production of the Type-1 movement since they were valuable timekeeping and synchronization tools for soldiers in battle. Alongside Russian technicians, many of the Chistopol locals gained work at the factory operating the machinery and aiding with production of defence equipment.

The Watches Auction to be held on 13 June features two very interesting Soviet military watches. Lot 730 is an example of a Russian pilots watch with the dial bearing the text ‘First Moscow Watch Factory’ above the red star of Russia and can be dated to between 1938 and 1940. The movement is stamped indicating the manufacturer and also bears the text ‘Public commissariat for engineering, Moscow’.

Once the German Army was pushed out of Russia, the Second Moscow Watch Factory moved back to Moscow to pick up where they left off however the locals that were working at the Chistopol factory continued making munitions for the Red Army. At the end of the war, weaponry was no longer in such high demand, so, armed with the equipment and materials to make the Type-1 movements, the townspeople started producing watch movements. In 1942, they were designated the name ‘Factory 835’ by the Russian Government which enabled them to make their own version of the Type-1 movements.

After Yuri Gagarin became the first Russian man to enter space, wearing a watch manufactured by the First Moscow Watch Factory, in a spaceship called ‘Vostok-1’, the factory produced a watch to honour his space flight, and by 1965, they were appointed as an official supplier of watches for the Ministry of Defence of the USSR and due to the popularity of these watches, officially changed their name to Vostok, (восток) which means ‘East’, in 1969. This is year also marks the creation of the ‘Komandirskie’ (commander’s) watch.

Watches were sold exclusively through Voentorg stores which catered solely to military personnel who could produce official documents to confirm their identity. Watches sold through these stores bear the phrase ‘Заказ МО СССР’ on the dial which translates to ‘By order of the Ministry of Defence of the USSR’. Any watch bearing this phrase is highly collectible as it shows that the watch was produced during the Soviet era.

Lot 724 is a fantastic example of a Komandirskie watch with even more impressive provenance to go with it. 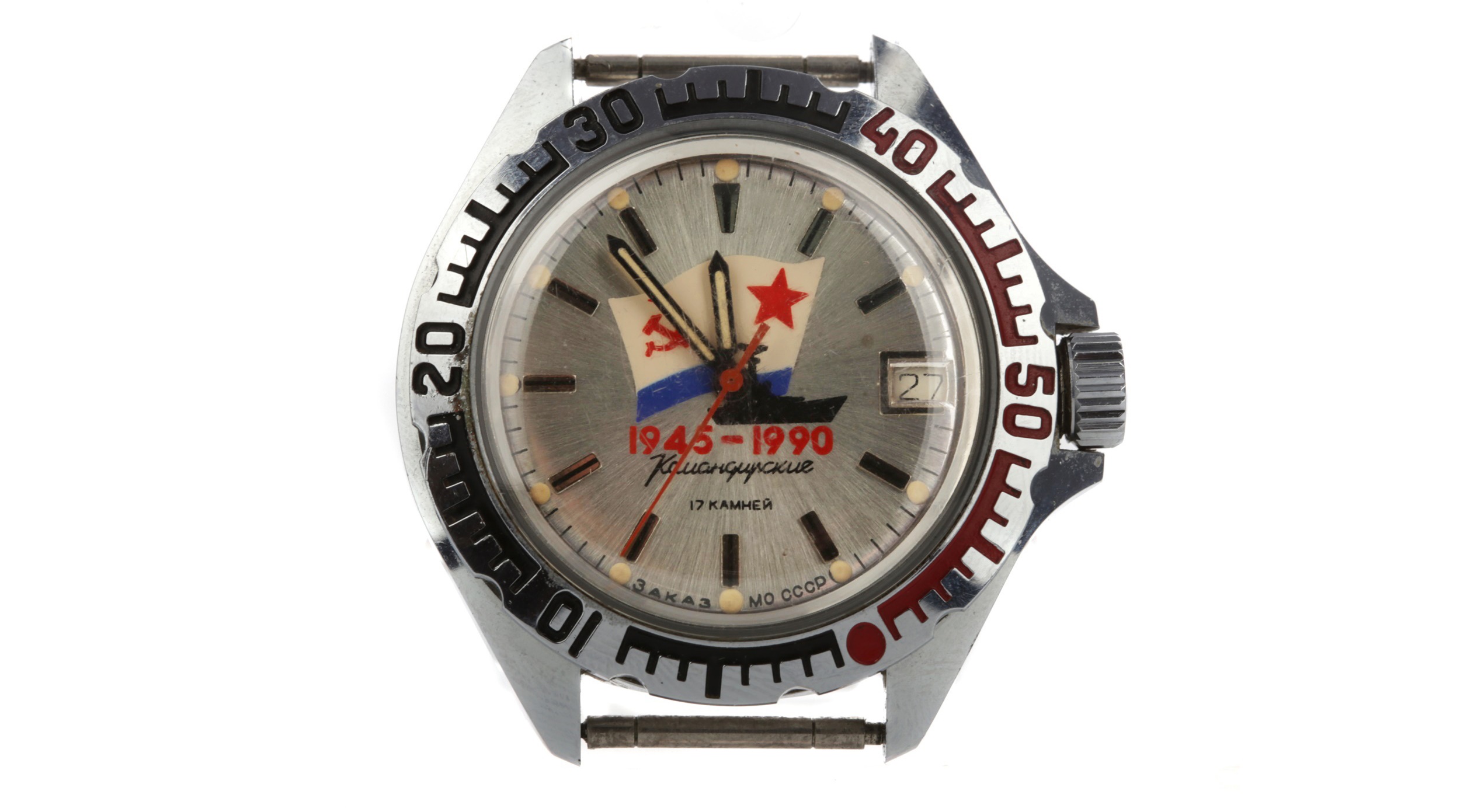 The year is now 1945; unknowingly, the end of the Second World War is on the horizon, the soldiers of the USSR have just landed in the German Democratic Republic and the Battle of Berlin is about to commence.

Regarded as one of the bloodiest battles in history, the Battle of Berlin was one of the last major offensives of the European Theatre of WWII. This was an attack by three Soviet Army groups to capture territory of East Germany as revenge for Germany’s invasion and destruction of the Soviet state in 1939.  The Germans were defeated by the Red Army and four victorious allies, Great Britain, The United States, France and the Soviet Union, claimed shared sovereignty over the GDR with each victorious nation occupying a sector of Berlin which remained a divided nation until 1990.

In 1990, the Two Plus Four Agreement was negotiated between East and West Germany and the Four Powers which occupied territory. In the treaty, the Four Powers renounced all rights they had in Germany and the nation was reunified however the Soviet forces were the last of the victors to remain in Germany until 1994 when their presence was terminated.

This watch features the flag of the Soviet Navy with the date ‘1945 – 1990’ signifying the rule of the Soviet Union over Germany. These 1945 commemorative watches were released every five years and with the fall of the Soviet Union in 1991, it means that this timepiece was the last of its kind to be produced in 1990, adding to its rarity.

Whilst serving in the Army Air Corps as part of the British Army of the Rhine, the current vendor was visiting the Army Air Corps flight in Berlin. Whilst there, he bought this watch from a USSR Serviceman guarding the Soviet War Memorial shortly after the fall of the Berlin Wall. This trip is fondly remembered as ‘one of the best trips that he can remember during his service days’. Having this watch has been a fond souvenir of his time served and his trip to Berlin however it’s now time for a new collector to have the enjoyment of this beautiful timepiece. With a wonderful provenance behind it, I’m sure that this will be much admired and carry a very poignant Army history on its journey into the future.