From Cartagena to Caledonia (and a few other places in between)

When we talk about the life of a watch, the story is not one of its creation and sale. The history of the big watchmakers and their factories is important and fascinating. However, the biographies of the complicated instruments they create and the lives they have allowed their owners to pursue, bestow far more interest and value on these objects.  None is quite as diverse, and frankly engrossing, as the story of this late 1960s Doxa divers watch.

The timepiece was purchased by a young Scot in the late 1960s while he was working in the Bahamas. It was worn continuously by him until he retired in 1997. The owner of a marina, he needed a watch that could withstand significant depths and remain water tight. His friend, a Dutch native, had just purchased such a watch by Doxa and on seeing its fitness for purpose first hand, our Scot decided to get one of his own.

The watch was soon a useful accomplice to our man in a variety of diving situations. These ranged from salvage and reclamation dives, to several dives guiding the likes of Jacques Cousteau to local blue holes (marine sinkholes.) In 1971, our Doxa devotee opened another marina, this time in San Andreas, South America. Predominantly working on salvage dives in Columbian-owned reefs, he also took part in spear fishing, all while wearing his watch. During one outing he and his business partner found a long-sought wreck off Providence Island. Sought after, it was, as it was laden with gold – but it turned out to be too heavy to raise. Recalling the day, he noted that two salvage companies had gone bankrupt waiting for the right conditions to even dive to the wreck, and he and his companion had managed to do so somewhat inadvertently. 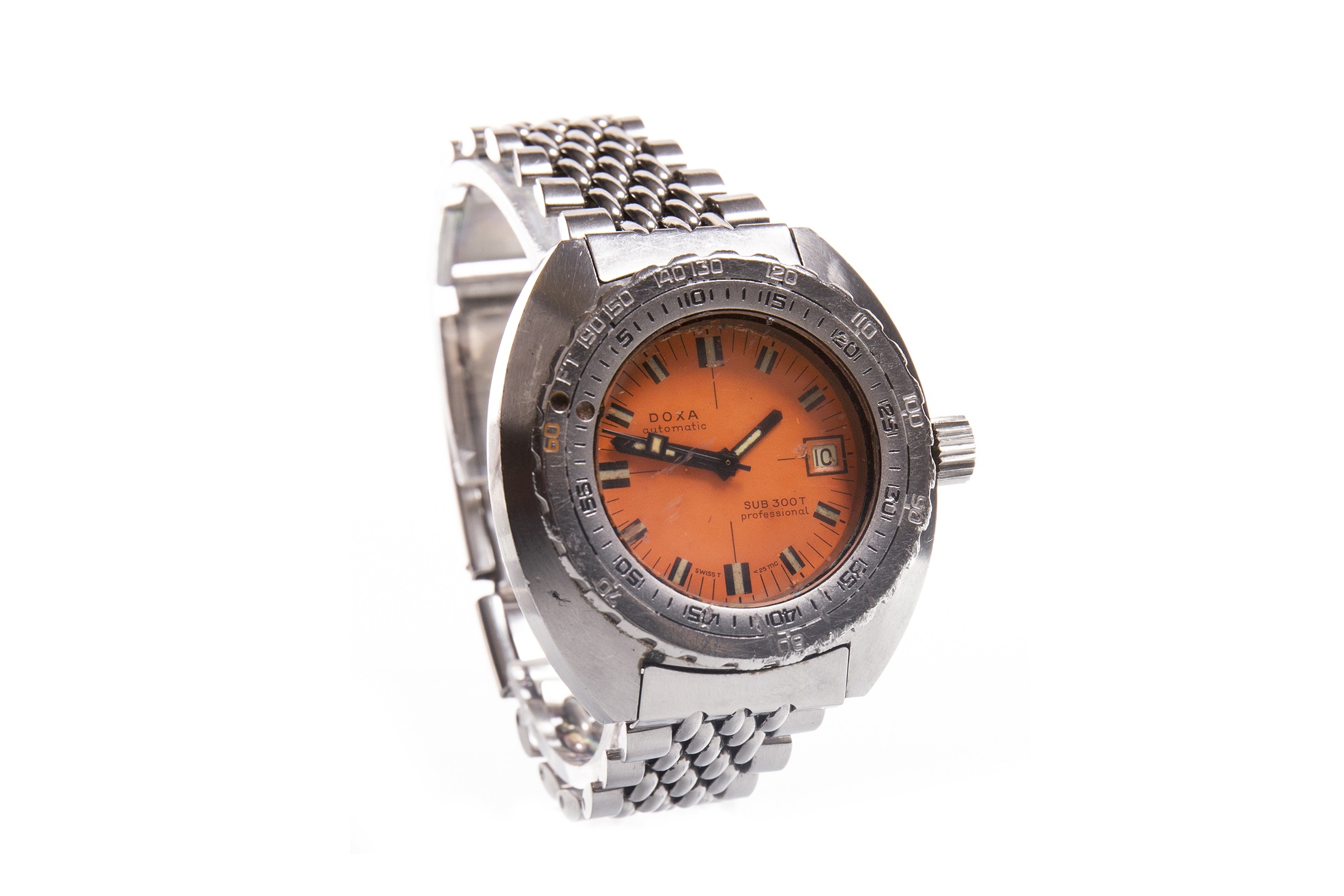 The watch bears the scars of its use and further tells its story. One day, off the harbour at Cartagena, our gent was fixing a boat’s propeller. He was underwater in murky conditions with poor visibility and a large barracuda smashed into his arm. Although he was physically unharmed, the bezel of the watch still has a large scratch from the incident. This is a feature that thankfully, during the watch’s only service in 1983, Doxa left unfixed.

Between 1976 and 1987, our diver worked in colder waters closer to home. Covering the North Sea, he worked inspecting and repairing oil rigs. Again, his Doxa was a constant presence, allowing him to measure the amount of time he had been under water and how deep he was exactly, both essential to his safety. Between 1987 and his retirement 10 years later, our man was a supervisor posted all over the world. His challenge was to find errors and weaknesses in a variety of underwater structures and technology including decompression chambers.

The watch in question is a Doxa Automatic SUB 300 T Professional. This has become quite an icon in the realm of divers watches since its release in 1967. Often referred to as a cult piece, Doxa released a 50th anniversary version in 2017. With the new affordability of recreational diving in the late 1960s, there came a boom in the sport and Doxa were determined to create a watch that was advanced and different from any existing competitors. From the orange dial to the dwarf seconds hand, and the very adjustable bracelet strap, this new watch was forged through deliberate, dogged and determined testing. It presented a raft of advances that were truly useful to the professional and recreational diver. McTear’s is proud to present this inspired and historically significant watch in The Watches Auction on 21 May at £2000-3000.