The Scottish Contemporary Art Auction takes place this Sunday, 11 March. Well-known Glasgow names such as Alasdair Gray, John Bellany and Peter Howson appear in the auction as well as thirteen paintings by Frank McFadden. McFadden's paintings have a likeness to Howson, perhaps due to the fact he mentored McFadden at the beginning of his career and they shared a studio. McFadden's dark and surreal artwork is intriguing to explore and his story is just as interesting. 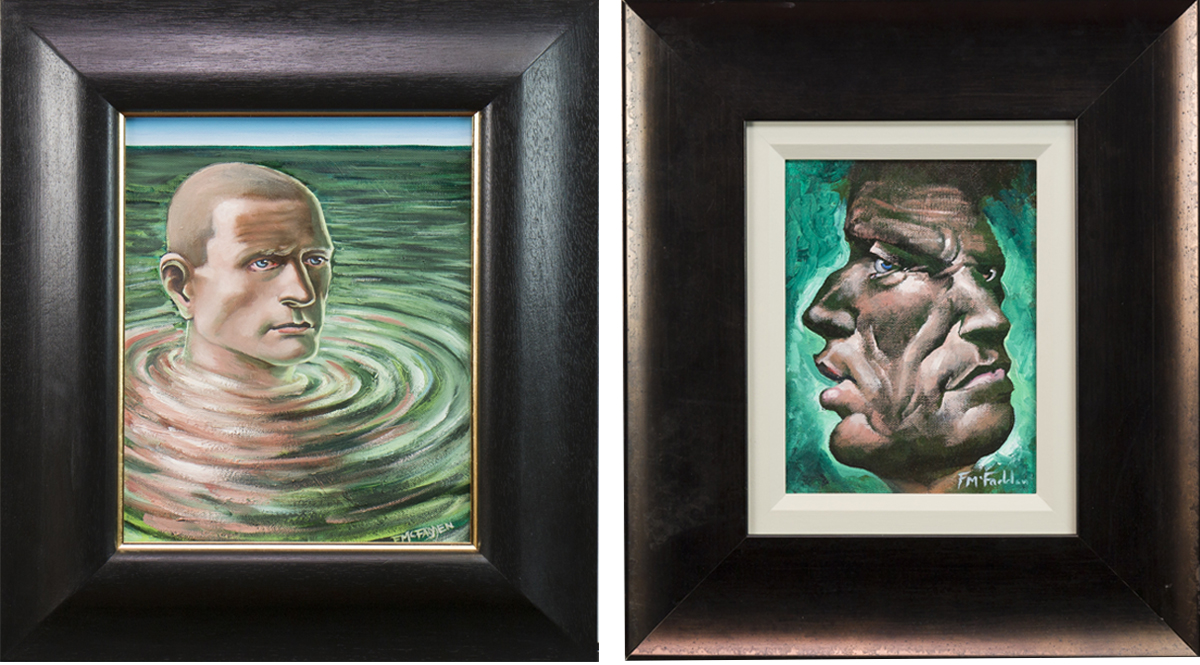 McFadden grew up in Maryhill, Glasgow and trained as a graphic designer but struggled with drug addiction for a number of years.  During this time, he sold the Big Issue but continued to produce artwork. He met Howson by chance in a café on Great Western Road and, after looking at his work, Howson employed him at his studio. McFadden was determined to get his life back on track, particularly for the sake of his daughter. Often, he uses his artwork to express this which is noticeable in the way that he titles his work. For example, lot 23 is titled The Methandonian Sea - No shore in sight is an interesting example of his work. Estimated at £300-500, it features a portrait of a man (most likely himself) neck deep in murky green water. The title refers to the heroin substitute methadone that McFadden most likely took to deal with his addiction. The subject of the painting acts as a metaphor for McFadden's sense of helplessness - he is in deep water without hope of dry land.

Another painting of two heads is titled Janus (lot 124) after the Roman god of beginnings. Janus is often shown with two faces as he looks to the past and the future, representing time and transitions, duality and endings. McFadden might have chosen to paint this God to signify a transition in his life towards a better quality of life.

The Scottish Contemporary Art Auctions feature paintings from private collectors and brand new work from selected, established artists. This unique format was started in 2008 and soon established McTear's as the single largest outlet in the world for contemporary Scottish paintings. McTear's sells more paintings each year than any other auction house or art gallery (public or private), art fair or festival in Scotland.