A rare and importance piece of Scottish footballing history will be coming under the hammer within our November Sporting Medals & Trophies auction. Unlike the majority of league and cup winners medals we see coming through the saleroom, this understated silver trophy comes from a time of turbulence for the country. Due to the outbreak of World War II, all normal competitions were suspended, with a number of regional tournaments having been set up in their place. Therefore, whilst both the Scottish Football League and Scottish League Cup were no longer contested, the Southern Football League and Southern Football League Cup were held in an unofficial capacity.

These were played at a time of unrelenting dominance for Rangers Football Club, them not having gone more than a year without lifting a major trophy since 1917. Indeed, during the so-called 'unofficial' years, the team won all six Southern League titles, as well as four of the six Southern League Cups (losing the other two in the final - one of which was cruelly snatched from them when the game ended in a draw, the winner being decided on who had been awarded the most corners).

The trophy offered at McTear's relates to the very first of those Southern League Cup tournaments, dating from 1940-41. The teams were divided into four groups of four, with Rangers topping their group after five wins out of six. They then went on to face St. Mirren in the semi-final, who were defeated in a resounding fashion by four goals to one, allowing Rangers to progress to their first Southern League Cup final. 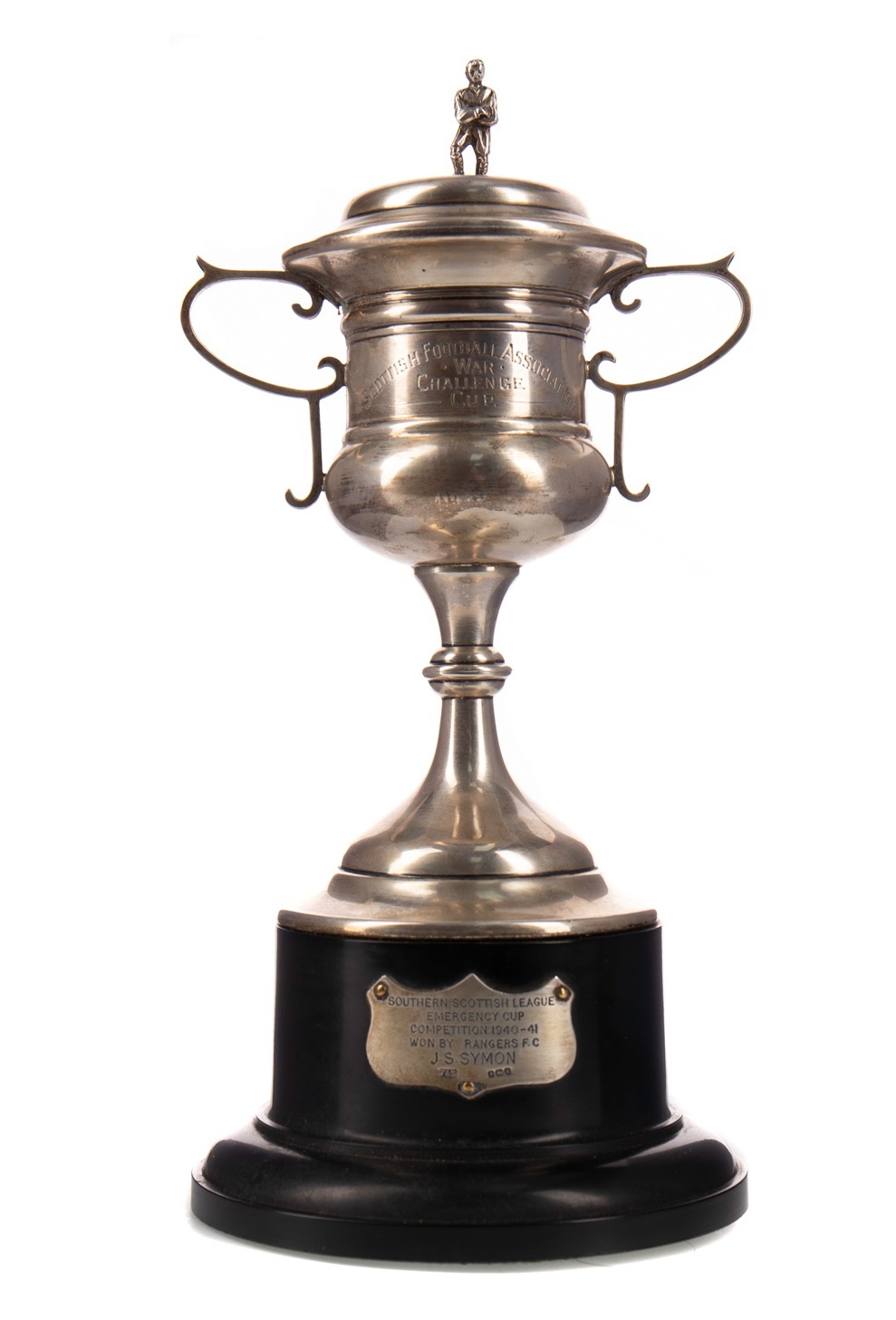 This final was played against Heart of Midlothian at Hampden on the 10th May 1941, with 69,000 fans turning out for the event. This was a more fraught affair than Rangers’ previous games, and, whilst Hearts went one goal up in the first half, a second half equaliser from the light blues pushed the game to a replay. This replay again took place at Hampden just seven days later, this time in front of 90,000 supporters. Whilst Rangers went two up before the thirty minute mark, a goal before the half time whistle put Hearts within distance. The Edinburgh side found themselves back in the game at 70 minutes, when an equaliser put the teams two a-piece. Rangers dug deep for the remaining twenty minutes however, with two lightning quick goals on the 86th and 90th minutes ensuring they lifted the first ever Scottish Southern League Cup.

This rather humble looking silver trophy was awarded to James 'Scot' Symon for his role in that team. Symon's is a name that will need no introduction to many of the Rangers loyal, he having succeeded legendary manager Bill Struth in 1954, steering the club to six league Championships, five Scottish Cups, and four League Cups. He also took Rangers into European football for the first time ever, guiding them to two Cup Winners Cup finals in 1961 and 1967.

Perhaps lesser known is Symon's playing career, which at first glance may be deceiving having only made 32 official appearances for Rangers. This, however, does not take into consideration his distinguished service during those 'unofficial' war years. Due to Symon's erstwhile career as an architect, he was to remain in Britain, putting his considerable skills towards the war effort whilst working in a reserved occupation, a draughtsman in the Linthouse shipyard on Govan Road of Alexander Stephen & Sons. During the war, the yard produced aircraft carriers, cruisers, mine-layers, destroyers, sloops, minesweepers and tank transport ferries. This allowed him to continue playing for the club, during which time he was a mainstay of Struth's squad. Symon racked up over 250 unofficial performances for the club and plenty of silverware along the way.

This is the first time any such trophy has come to auction and presents itself as a unique opportunity to own a rare and important piece of Scottish footballing history.

Browse & bid on the auction here >>