Scottish artists are strongly represented in this month’s British and International Pictures Auction and our specialist has selected some choice pieces to watch out for on Wednesday 26 August.

Dated 1886, this sketch was painted the same year as Lavery’s first solo exhibition at Paisley’s Town Hall in November. Unfortunately, no exhibition catalogue exists, but the autumnal tones suggest it was painted perhaps only in the months before. The exhibition title ‘Portraits, Pictures and Sketches painted in the Neighbourhood’, further suggests the inclusion of the sketch. Lavery utilised strong brushstrokes in his work to emphasise the sketch-like quality of his work, and lot 43 is a classic example of the artist working outside capturing his natural surroundings.

When it comes to Victorian coastal scenes, William McTaggart is one of Scotland’s great interpreters of the Scottish landscape. Largely known for his energetic paintings on the erosion of Celtic coastal towns, the focus here is on the recreational qualities of the sea and is a nostalgic trip back to McTaggart’s childhood summers spent in Kintyre.

Dated 1893, by this point McTaggart’s idiosyncratic figurative technique was well and truly established. By partially absorbing them into the sea, he captures the sheer energy and elemental nature of waves, as the subtle brush strokes vigorously crash against the shore, spraying the children with fresh seawater. McTaggart brought soul and spirit into his coastal scenes with an added human element, and Children Shrimping is a beautifully painted oil essential for any serious collection of fine Scottish art. 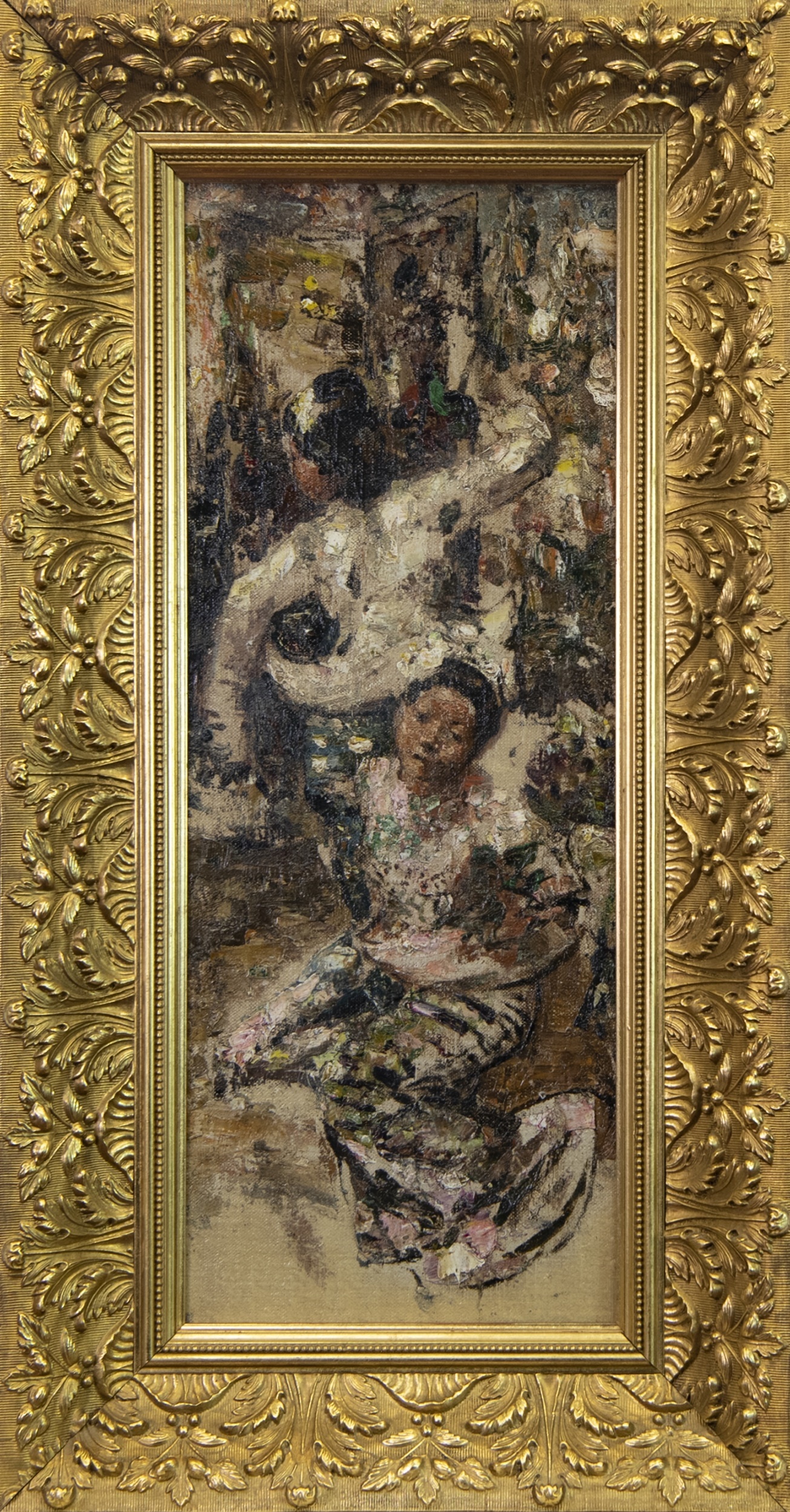 Hornel channelled his love for the Japanese aesthetic in many of his paintings, visiting the country many times over the next few decades. In 1920 he travelled again via Burma and captured the locals through the medium of photography. Hornel utilised this to his advantage, using the photographs as references back in his Broughton House studio in Kirkcudbright.

In lot 35 he has employed his characteristic tapestry of colour to capture the gardens of Kyoto and the dancers’ traditional dress which all come together to create an exotic and enticing composition. The exposed canvas indicates this is likely an unfinished piece, but nevertheless it has been treasured dearly by its previous owner and proudly displayed in a stunning gilded frame which exudes an aura of elegance. 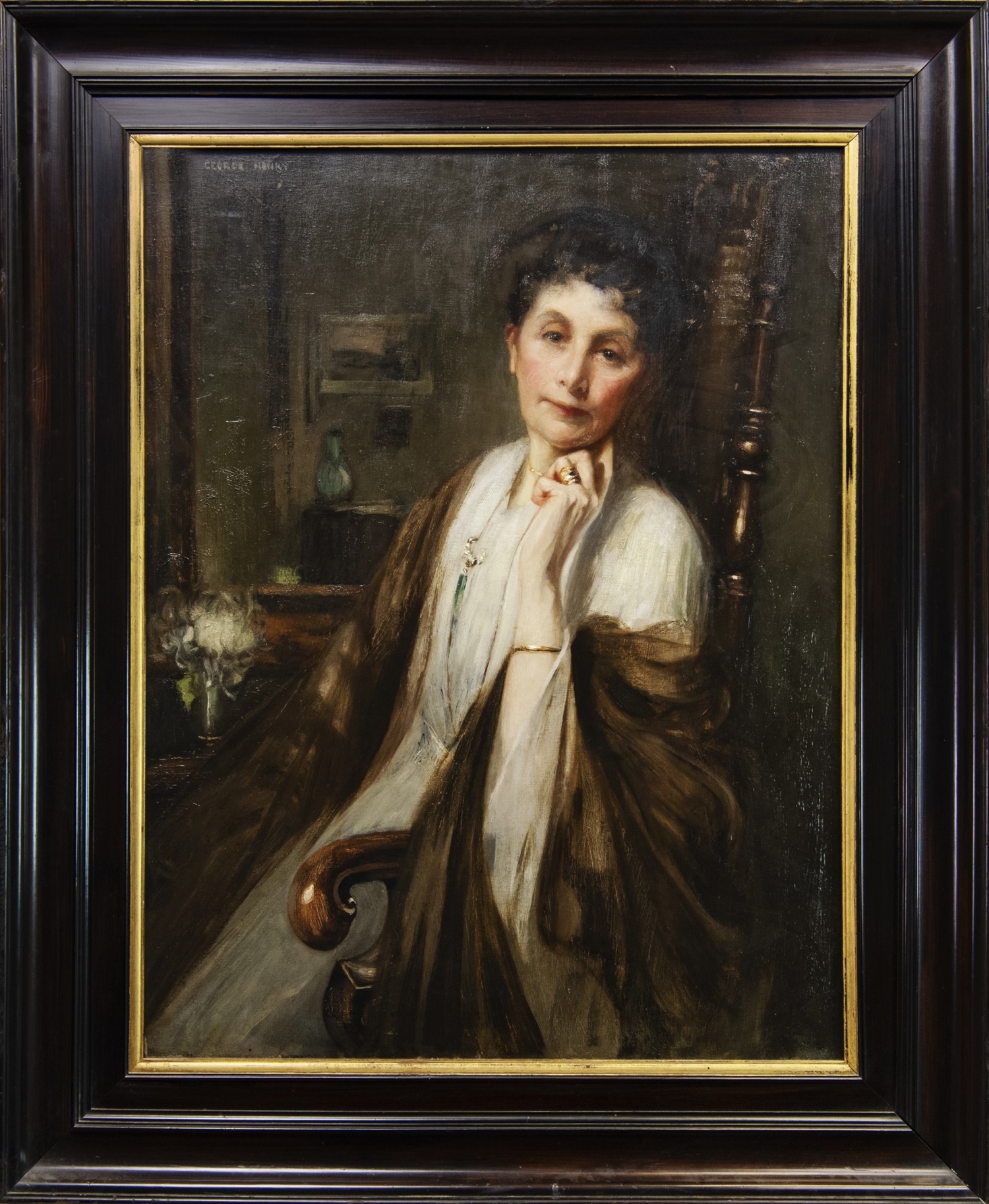 George Henry’s ability to capture the sumptuous fabrics and surroundings of his sitters made him one of the most highly sought after society portraitists in London. Silk kimonos draped luxuriously over the sitter, combined with the expertly placed ceramics, pictures and floral arrangements alluded to the exotic and elegant, which attracted a wealth of clients hoping to be captured by Henry’s expert hand.

The sitter in this striking Edwardian portrait is not known, but she was certainly a lady of means as evident by her decadent surroundings, sparkling jewellery and fashionable dress. Lot 37 carries an auction estimate of £7000 – 10,000.

This piece will be of particular interest to those with Glasgow connections as it depicts the city’s famous river bursting with life during its industrial heyday. It’s an Impressionist view of the Clyde and Kay’s gentle brushwork illuminates the water creating small waves which gently rock the boats lined up along the shore, demonstrating the level of activity along the stretch of river. Kay became renowned for his dynamic depictions of the Clyde and lot 44 presents a fantastic opportunity to own a piece of his maritime mastery.

This is a very personal and touching piece by Gemmell Hutchison (1860 – 1936), as it depicts his only grand-daughter Jean, tucking into her morning porridge in the family home in Coldingham. Jean was deaf and dumb and featured in many of her grandfather’s paintings and this is a quintessential example of the artist’s sensitive and charming portrayal of the innocence of childhood.

A pioneer of avant-garde dance and hugely influential in artistic circles, Margaret Morris was also a very talented artist in her own right, but it wasn’t until 1984 that the first comprehensive exhibition of this aspect of her work took place. ‘The Art of Margaret Morris’ hosted by Cyril Gerber Fine Art in Glasgow, brought together for the first time a selection of her paintings, sketches and costume designs. Lot 148 formed part of this exhibition and it really is the personification of Morris’ artistry, demonstrating her talents as a visual artist and her love and dedication to dance.

Costume Sketch is one of four pictures in this catalogue which featured in the Cyril Gerber landmark 1984 exhibition and which have been consigned by two separate private collectors.