The A, B, C of haute joaillerie.

Haute Joaillerie or ‘high jewellery’ is a term used in the industry to define pieces of exceptional quality, craftsmanship and include only the finest diamonds and precious gems. This term is reserved only for a handful of haute joaillerie maisons or designers across the globe. One of the indicators for this category of jewellery is that the makers have commissioned jewellery for Royal families as far back as the mid 1800’s.

As some of the attributes for this class of jewellery include the finest diamonds and precious gems that money can buy, the price tags for such items are often eye watering. Although there are many beautiful diamond jewellery pieces in circulation today, when you see a piece of haute joaillerie, you just know. It’s the type of item that takes your breath away and captures you in a moment of mesmerisation. These items are hard to pull your eyes away from and it poses the question, which glamorous, high flying lady was lucky enough to own these jewels? Gone are the days of Hollywood glamour so it’s more likely that you’ll find such jewellery adorning the bodies of celebrities on the red carpet today.

McTear’s is delighted to have not one but three items of haute joaillerie in the upcoming Jewellery Auction to be held on 26 February. Going under the hammer will be works by jewellery maisons Asprey, Boucheron and Cartier. 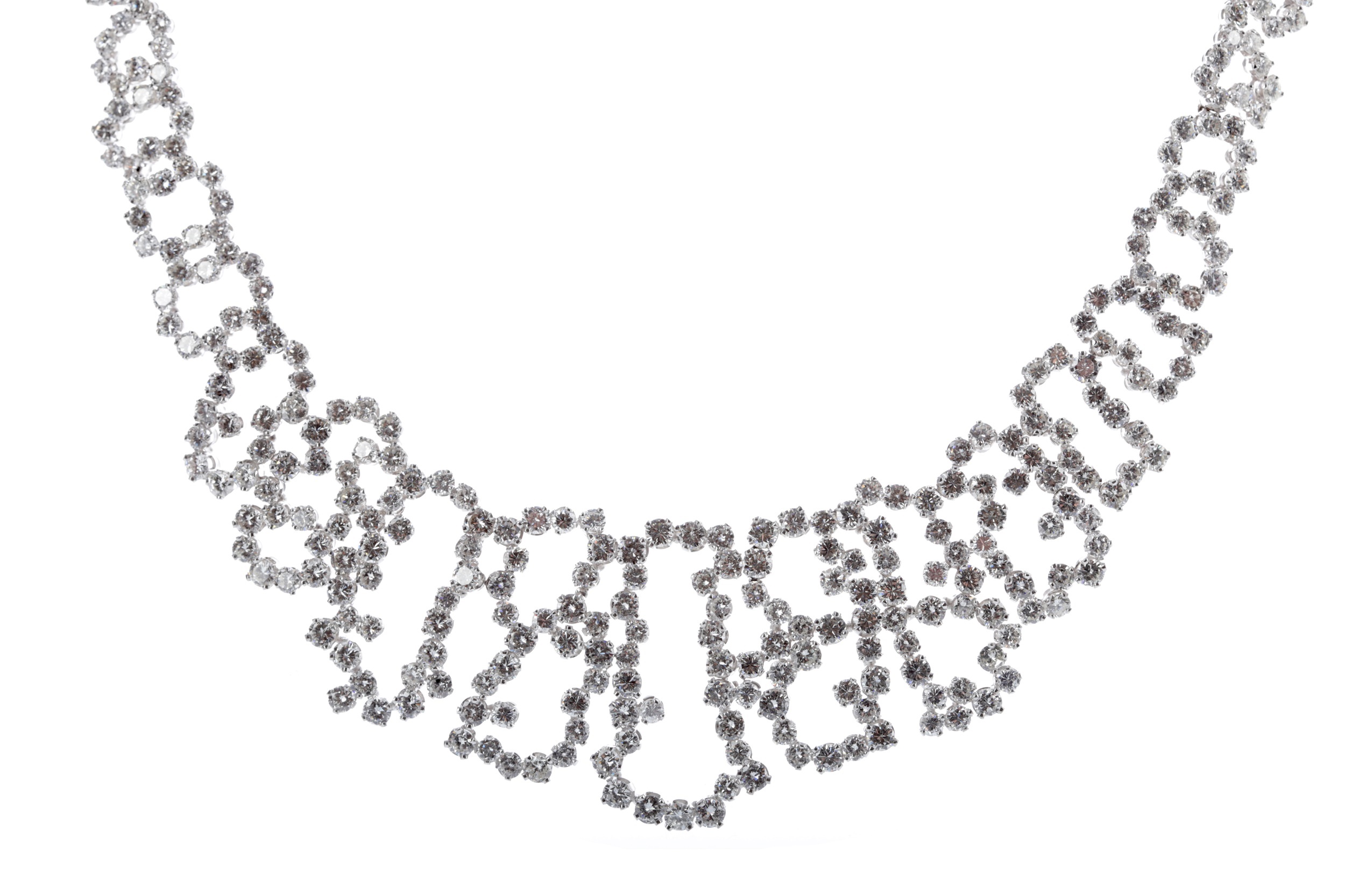 A is for Asprey.

Asprey was founded in 1781 in Surrey, England. Originally founded as a silk printing business, they soon became known as a luxury emporium and by the 20th century, they had employed some of the finest craftsmen to become what would be some of the finest jewellery in the world. They have produced crowns, coronets and sceptres for Royal families around the world and since 2013, they have held the Royal Warrant from the Prince of Wales.

Lot 471 is a phenomenal diamond necklet by Asprey. With its sinuous form, it is set with approximately 50.00 carats of round brilliant cut diamonds. The craftsmanship of this piece and the way that it rests on the collarbones puts on a dazzling performance when worn and even when resting in its original red velvet fitted case which is why this piece comes with an estimate of £40,000 - £50,000.

B is for Boucheron.

The House of Boucheron is the oldest jewellery maison in the Place Vendôme in Paris, the heart of haute joaillerie maisons. Some say that he chose the mansion house number 26, which remains their current location today, so that the sunlight would reflect off the gems and nobody would be able to walk past without staring in awe at his magnificent display. Founded in 1858 by Frédéric Boucheron who ventured away from the family business of clothiers, he took inspiration from the fluidity of fabrics and translated this into jewellery. By 1878, they received Royal recognition when Russian Prince Felix Youssoupoff purchased a corsage during a trip to Paris. Many Boucheron pieces are still in the collections of many Royal families today including our own British Royal family.

Lot 511 is a breathtaking diamond bracelet by Boucheron. The flower motifs and construction of this bracelet highlight the inspiration drawn from the movement of fabrics. Set with over 30.00 carats worth of diamonds, this spectacular bracelet comes with an estimate of £40,000 - £50,000.

C is for Cartier.

Cartier is perhaps one of the most popular jewellers at the moment thanks to celebrity influence however their vintage pieces are truly something to behold. Founded in 1847 by Louis-François Cartier, they have a very impressive history with Royal families from Belgium, Britain, Spain, Russia and Egypt. King Edward VII of Britain referred to Cartier as "the jeweller of kings and the king of jewellers’. In addition to Royalty, many of the famous gems owned by celebrities have originated from Cartier such as the infamous Taylor-Burton diamond.

Lot 396 is an impressive diamond set bracelet by Cartier. Set with approximately 3.50 carats of round brilliant cut diamonds, this feminine but powerful bracelet comes with an estimate of £10,000 - £15,000.

Alongside this, a pair of Art Deco sapphire and diamond cufflinks feature as lot 441 with an estimate of £8000 - £10,000. Vintage Cartier is often recognisable due to their style and iconic design – designs which last a lifetime.

These pieces are often once in a lifetime purchases but with these items, you are guaranteed that they will hold, if not increase, in value for generations to come. Creations like these are the reason that specialists like myself enter the jewellery industry because once you are captured by their beauty, you’ll never let go.

For a complimentary valuation and to discuss consigning to the Jewellery Auction please contact our specialists on 0141 810 2880 or auction@mctears.co.uk.