The serpent is one of the earliest symbols used in many cultures, religions, mythology and symbolise many things from good to evil and love to deception. For this reason, snake jewellery has been around for thousands of years and its popularity continues to rise as collectors fiercely compete to get their hands on one of these slippery snakes. Jewellery Specialist Amy Cameron takes a look at how the connotations and depictions of this fiery reptile have these have evolved throughout time.

Ancient Egypt is thought to be the first culture to adopt the use of snakes within their jewellery. Snakes represented royalty and deity; a person of divine status which is why they can be seen as a common theme in Ancient Egyptian jewellery, headdresses, sarcophagi and even on the side of many pyramids that remain today. For this reason, only the elite would be able to adorn themselves with snake jewellery. 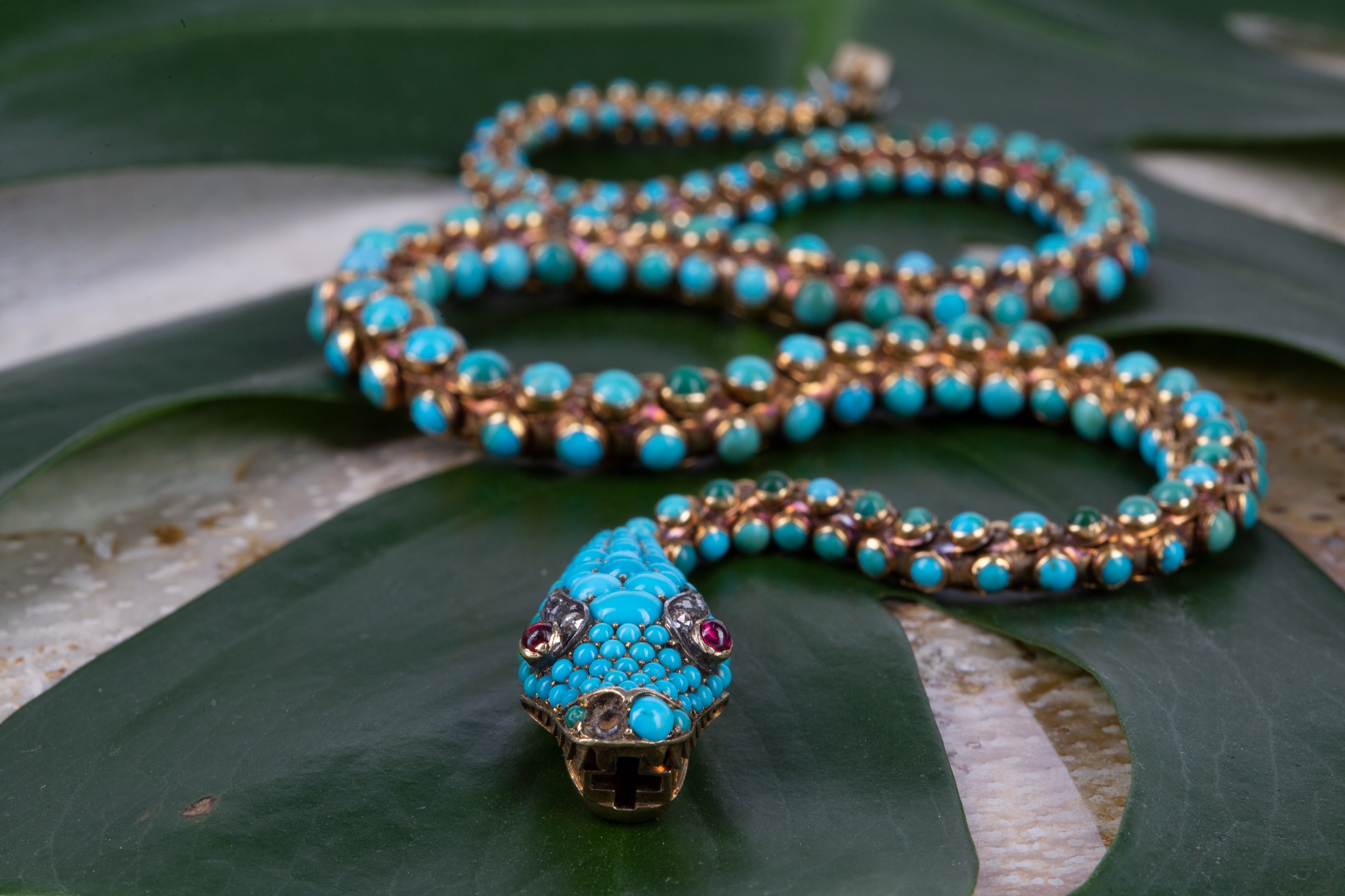 Perhaps two of the most recognisable portrayals of serpents are embodied with evil connotations such as the seemingly enchanting serpent depicted in the Bible which lures Adam and Eve to eat the forbidden fruit in the Garden of Eden or in the gorgon Medusa, who has snakes in place of hair, in Greek mythology. Snakes are heavily recurring in Roman and Greek mythology with many depictions representing rebirth, healing and protection and many wearers of snake jewellery during this era believed that it would cure them of sickness and disease.

Rapidly slithering through time, we see examples of snake jewellery set in precious metal with diamonds, rubies and a multitude of beautiful stones appear during the Georgian Era and often in mourning jewellery. Until this time, the snake was mainly a symbol of everlasting life and rebirth, a fitting symbol for a mourning piece. During this era, it was very unlikely that a jeweller had seen a snake in real life so when entrusted with the task of crafting this jewellery, they would often refer to depictions from stories and mythology of giant sea serpents and dragons hence why much of the snake jewellery from this period may not look like your average snake and more like a terrifying sea monster, often depicted with sharp bared teeth. 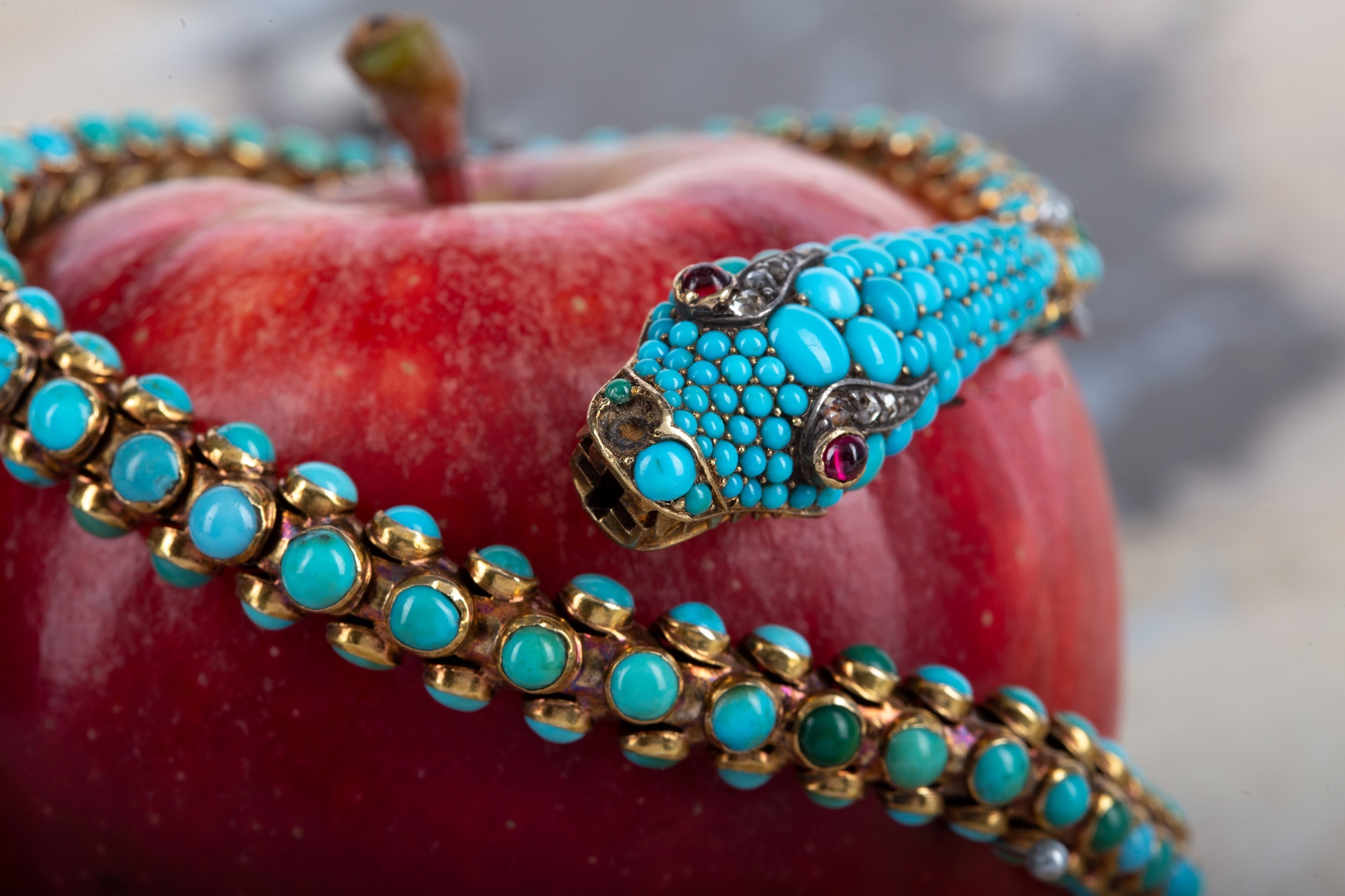 With the dawn of the Victorian Era, this is where we really see snake jewellery come to fruition and ignite what would symbolically become an everlasting love between collectors and snake jewellery. This is also where we see a shift from the powerful symbolism of the snake to a softer, more romantic representation.

When Prince Albert proposed to Queen Victoria, he presented her with an eighteen carat gold ring in the form of a serpent set with ruby eyes, a diamond mouth and a large emerald to the centre which was Queen Victoria’s birthstone. The coil of the snake now became synonymous with eternal love. This ignited a trend and soon, everyone wanted to emulate the Queen and the frenzy to own a precious snake began. Snakes were now depicted as much softer creatures, now with closed mouths and wide set eyes and often set with precious gems. In early Victorian depictions, brooches often featured elaborately coiled snakes often with gem set drops or lockets hanging from their mouths. In the 1840’s, snake bracelets became very popular due to the monarch wearing one to her first council, signifying that she had the wisdom of the serpent and that she was ready to rule. IT was also around this time that turquoise became the predominantly chosen stone for snake jewellery as the stone represents a promise of love. By the 1860’s, ‘snake chain’ necklaces were being crafted to mimic the undulating body of the snake with individual curved plates representing scales and seamlessly meandering like the body of a snake. 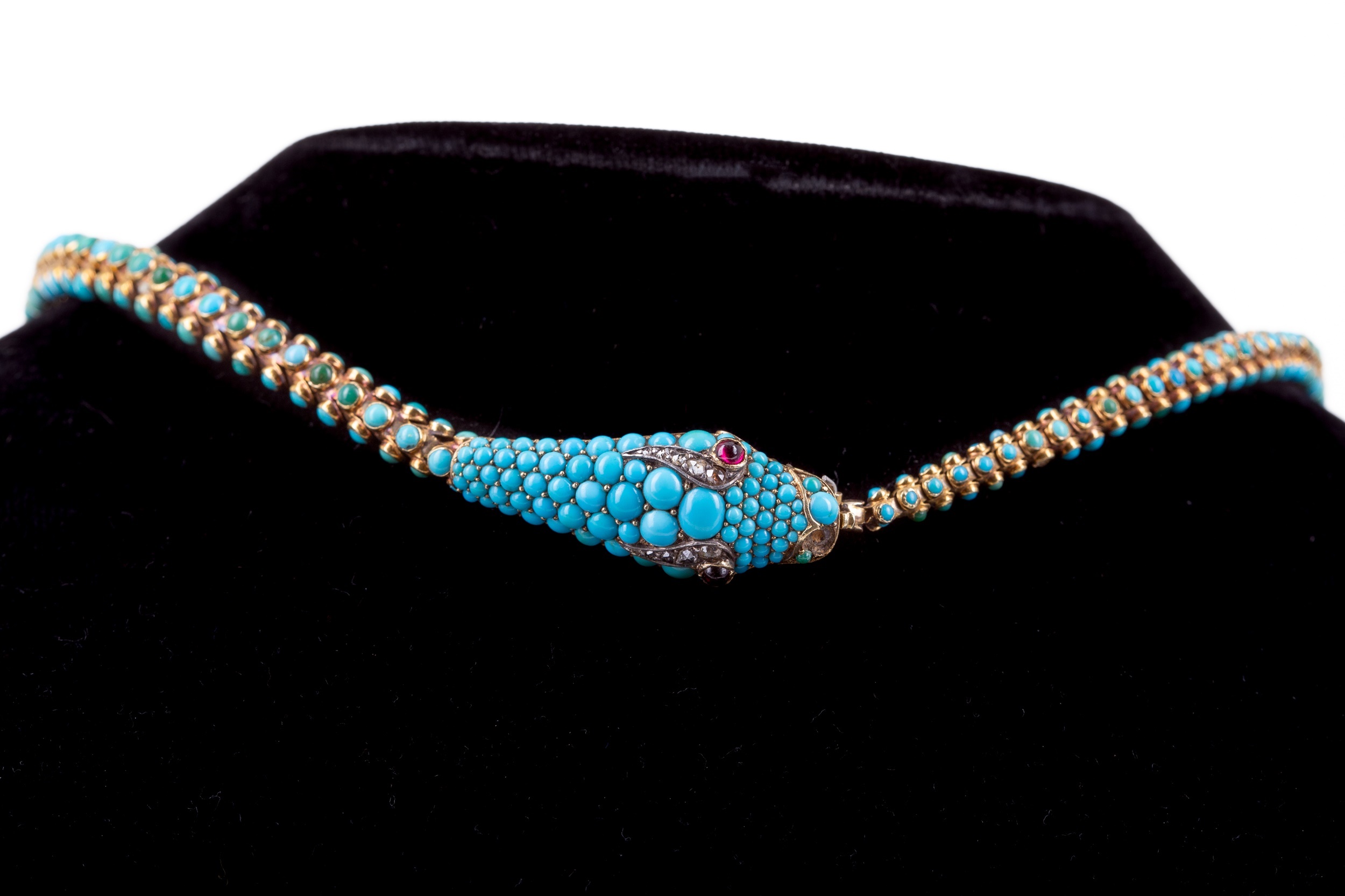 This complex process was further highlighted by the addition of bezel set turquoise stones to the body and pave set stones to the head. This is also where we see the return of the fearsome looking snakes with bared teeth which was often part of the clasp. The ouroboros snake, devouring its own tail, has a set of sharp teeth and legend has it that the return of the scary looking snake was influenced by an incident at the Zoological Gardens Reptile House in 1852 whereby one of the reptile keepers, Edward Gurling, after a night of gin drinking, headed to the reptile house in a moment of rashness and roughly handled one of the cobras. He was promptly bitten between the eyes and died an hour later.

Serpent jewellery from this period is highly collectable and rarely seen making lot 708 in the 10 June Jewellery Auction a dream for antique jewellery collectors. The ouroboros snake is set with cabochon turquoise stones and ruby and diamond eyes. He is sadly missing one stone from his muzzle, perhaps lost in a fierce battle against an over-eager reptile handler.

With various symbolistic meanings, only the wearer can decide what their snake jewellery represents to them however it is a certainty that the fierce serpent will be eternally popular with jewellery lovers for generations to come.