Lot 1332 in Friday’s Jewellery Auction is a striking example of a Victorian mourning ring, a finger ring worn to commemorate the death of a loved one. The maximmemento mori – to remember death – inspired macabre jewellery in the Middle Ages. Such items were decorated with skulls or crossbones and cautioned the wearer to lead a moralistic life in fear of judgement in death. Mementos evolved in the Victorian era and the concept of mourning jewellery matured with the distinct purpose of memorialising one individual. Gold was used near exclusively for these objects and was ornamented with dark material such as jet, onyx, or enamel. Lot 1332 demonstrates these characteristic features with a central inscribed band of black enamel flanked by moulded foliate borders. The reserved decoration and the broad band size suggest that this lot was originally a man’s ring. Female mourning rings were thinner and more elaborate, with articulated foliate edges or a handsome central gemstone. 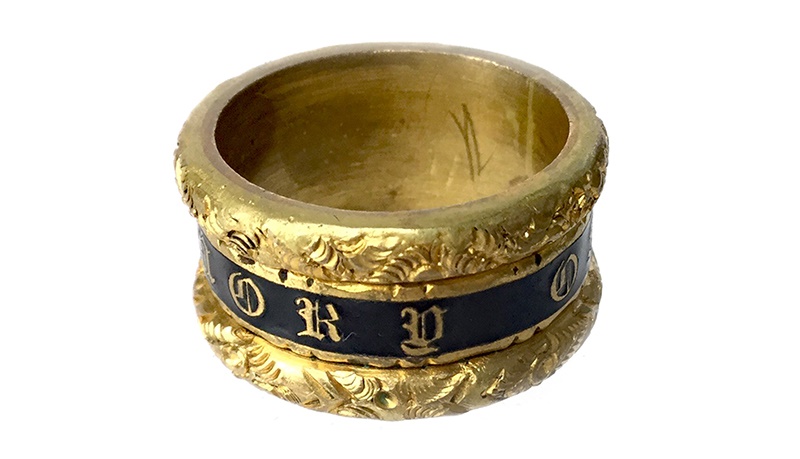 Jewellers advertised the speed with which they could produce bespoke bereavement jewellery engraved with the names and dates of the decedent. Moving into the late Victorian era, when the emergent middle class had greater disposable income, jewellers also held a stock of less expensive mourning rings with generalised sentiments and decoration. The inscription of this lot, ‘In Memory Of’, likely falls into the latter category. Unusually for a piece of this age, the ring box potentially may be the original. Muir and Sons Jewellers, as denoted on the inside of the box, were trading from the late 19th century and the velvet cushion is cut specifically to the shape of the ring. Be sure to come in and view this fascinating piece of history before its sale on Friday 31 January!