The GlenDronach distillery, established in 1826 and located by Huntly, is instantly recognisable due to its use of the finest hand selected sherry casks from Spain. It has a rich history and still produces this spirit of traditional methods. After being mothballed in 1996, it was reopened in 2002, and is going from strength to strength. In 2011 GlenDronach were commissioned to produce a special edition bottling to mark the opening of Donald Trump's Aberdeenshire golf, 'Trump International Gold Links'. On the 25th June 2012, 504 bottles of 25 year old GlenDronach were bottled, and all with individual numbers. A small number of these bottles were signed by President - elect Donald Trump, which has seen the value on these bottles increase from a few hundred pounds to making £2000 upwards, making lot 1214 in our January Whisky Auction a prized bottle for any trophy cabinet.

The limited edition whisky, which was distilled in 1985 and matured in GlenDronach’s signature sherry cask, was given an estimate of £2500 to £3500 however, when the auction started it was clear there were several collectors keen to get their hands on the rare bottle.

Following intense online, phone and in room bidding, the GlenDronach was purchased by a Canadian buyer for a hammer price of £6,000.
Commenting on the sale, McTear’s Whisky Expert, Laurie Black, said: “There was a huge amount of interest in the bottle and we were delighted with the final price, which was several times more than previous Trump bottles have sold for. The GlenDronach is a stunning whisky in its own right however, the Trump connection gave this particular bottle a presidential boost.”

The Trump dram was not the only high profile whisky to feature in McTear’s Rare & Collectable whisky auction. A bottle of 52 year old Macallan 1950 fetched £10,000, while a bottle of the now legendary Black Bowmore from Islay, was purchased for £5,200. Rare examples of Springbank are also much in demand so there was heightened interest in The Millennium Collection. Containing full size and miniature bottles of 25, 30, 35, 40, 45, and 50 year old Springbank single malt, the lot was sold for £10,000.

Also appearing was an 18 year old Macallan which sold for £1,500, with all proceeds going to the Earl Mountbatten Hospice in Newport on the Isle of Wight. The hospice looked after the mother of the seller, who worked as a chef at Macallan for 30 years. Laurie Black continued: “It was a fantastic sale with some truly outstanding whiskies. The prices achieved on the day reinforce the view that rare and collectable whisky continues to be a strong investment opportunity.” 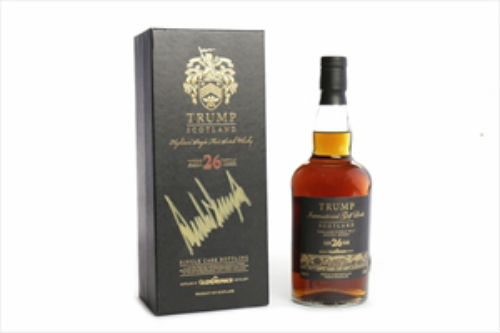